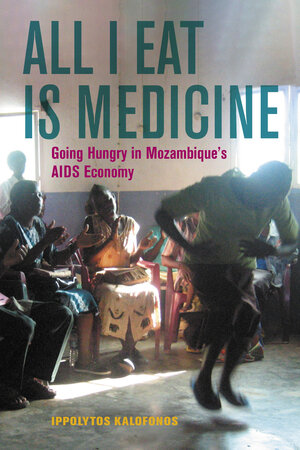 All I Eat Is Medicine Going Hungry in Mozambique's AIDS Economy

All I Eat Is Medicine charts the lives of individuals and the operation of institutions in the thick of the AIDS epidemic in Mozambique during the global scale-up of treatment for HIV/AIDS at the turn of the twenty-first century. Even as the AIDS treatment scale-up saved lives, it perpetuated the exploitation and exclusion that was implicated in the propagation of the epidemic in the first place. This book calls attention to the global social commitments and responsibilities that a truly therapeutic global health requires.

For the 2021 American Anthropological Association meeting, Ippolytos Kalofonos, author of All I Eat is Medicine: Going Hungry in Mozambique’s AIDS Economy, joined us to discuss some of the key findings from …

Ippolytos Kalofonos is Assistant Professor in the Center for Social Medicine and the Humanities at the Jane and Terry Semel Institute for Neuroscience and Human Behavior in the Department of Psychiatry and Biobehavioral Sciences of the David Geffen School of Medicine at University of California, Los Angeles, and the International Institute at UCLA. He is a practicing psychiatrist at the West Los Angeles Veterans Affairs Medical Center and Affiliated Investigator in the Center for Healthcare Innovation, Implementation, and Policy, Greater Los Angeles VA.

"Ippolytos Kalofonos argues for global public health systems to confront the underlying causes of inequities instead of only providing medicine to the ill. In doing so, he explains that hunger, disease, and poverty are interlinked."—FoodTank

"All I Eat is Medicine is a grounded account showing that humanitarianism aid is a double-edged sword."

"Through a compelling and vivid ethnography, Ippolytos Kalofonos recounts the moment when medicines became available after Mozambique's devastating AIDS epidemic experience. When patients' conditions improved, it generated hope for a better life while unveiling structural violence translated into hunger and suffering."—Didier Fassin, Professor of Social Science at the Institute for Advanced Study and Annual Chair of Public Health at the Collège de France

"All I Eat Is Medicine provides a powerful critique of global public health in the key context of HIV/AIDS treatment scale-up in Africa. Ippolytos Kalofonos brilliantly traces legacies of colonialism, war, racism, extraction, and international development as they affect personal and collective experiences of hunger and sickness. He presents flesh-and-blood accounts of people in Mozambique living with HIV/AIDS as they navigate the emerging AIDS economy and care for one another as community health workers, volunteers, and activists. Witnessing the inspiring actions of individuals, families, and communities, Kalofonos contributes one of the most compelling critiques of the 'biomedical tunnel vision' that effaces political, economic, and social realities in a stifling focus on individual behavior. Building on the work of social medicine visionary Frantz Fanon, Kalofonos calls for global solidarity in moving beyond the provision of medicine and confronting the political and economic forces, institutions, and policies that produce social and health inequities in the first place. All I Eat Is Medicine is a must-read for everyone who cares about health, medicine, social inequities, and global relations."—Seth M. Holmes, University of California, Berkeley, author of Fresh Fruit, Broken Bodies

"A beautifully empathetic and theoretically insightful ethnography of human suffering on the front lines of the AIDS epidemic. It is a trenchant on-the-ground critique of global techno-scientific failure in the midst of the historic success of the scale-up of a Pharma-driven miracle in sub-Saharan Africa. The book evokes the beauty of human resistance and search for social solidarity and survival against all odds."—Philippe Bourgois, coauthor of Righteous Dopefiend and author of In Search of Respect: Selling Crack in El Barrio

"Through careful observations and intimate narratives drawn from long-term fieldwork, this valuable ethnography shows that the scaling up of HIV treatment in Mozambique altered ordinary lives in unintended ways. Kalofonos reveals how a successful global-health intervention can also be a betrayal, and a medication side effect can be a potent political critique."—Claire Wendland, University of Wisconsin–Madison, author of A Heart for the Work

"This searing account follows the stories of people living with AIDS to understand how they experience, understand, and survive AIDS care, treatment, and support in Mozambique's post-socialist era. Kalofonos deftly illustrates the political, economic, and social stakes of ARV scale-up, foregrounding the local, embodied critiques of dispossession, exploitation, and exclusions at the heart of what he calls the AIDS economy."—Adia Benton, Northwestern University

"Weaving together compelling case studies and a persuasive argument, All I Eat Is Medicine offers sensitive ethnographic portrayals and illuminating analysis. Written in clear and accessible prose, the book speaks to both a medical anthropology audience and a wider public."—Daniel Jordan Smith, Professor of Anthropology, Brown University

"All I Eat Is Medicine examines the rise of global health at a unique moment and from a rare vantage point. Its chronicle of the lives and struggles of people living with HIV and AIDS in Mozambique demonstrates how long-term fieldwork can marshal powerful insights into the life-and-death stakes that emerged as the first generation of ARV treatment programs were rolled out in Africa. It serves as a model for medical anthropology and offers an accessible and moving account of interest to students and practitioners of global health."—Vinh-Kim Nguyen, Co-Director, Global Health Centre, The Graduate Institute, Geneva

"Searingly honest, All I Eat offers an eye-opening, deeply grounded analysis of the perils of global-health reductionism. Foregrounding the jarring voices of activists and other people living with HIV/AIDS, Kalofonos argues that unless embedded power asymmetries are shattered and replaced by a truly collaborative 'ethics of interdependence,' the intertwining problems of disease, hunger, and poverty will persist, wonder drugs notwithstanding."—Anne-Emanuelle Birn, University of Toronto, lead author of Oxford's Textbook of Global Health

"Physician-anthropologist Ippy Kalofonos masterfully reworks metaphors of African hunger and international medical relief to show how colonization is alive and well in global pharmaceutical regimes. A must-read for anyone who wants to understand the biomedical basis of contemporary racial capitalism—and, more importantly, for anyone who wants to stop it."—Helena Hansen, MD PhD, Professor, David Geffen School of Medicine at University of California, Los Angeles

"As the world struggles with Covid-19, All I Eat Is Medicine reminds us that the HIV/AIDS epidemic has not yet been conquered in many parts of the Global South where the legacies of colonialism, capitalist exploitation, and inequality are ongoing. This carefully designed book by an anthropologist who is also an epidemiologist and psychiatrist gets to the roots of the relationship between HIV/AIDS and the 'embodiment of hunger' itself. Kalofonos is an excellent writer and storyteller. Rita, one of the HIV patients, describes a key dilemma: 'Each person eats at the cost of another person…that person is eating the blood of the other.' Kalofonos makes a clarion call for global-health agents to go beyond the technological 'magic bullets’ of distributing retrovirus drugs to one based on the values of ethnographic intimacy, care, social solidarity, inclusion, equity, and social and medical  justice."—Nancy Scheper-Hughes, author of Death Without Weeping: The Violence of Everyday Life in Brazil
Read More >