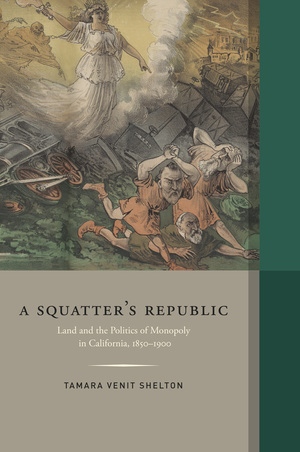 Who should have the right to own land, and how much of it? A Squatter's Republic follows the rise and fall of the land question in the Gilded Age—and the rise and fall of a particularly nineteenth-century vision of landed independence. More specifically, the author considers the land question through the anti-monopolist reform movements it inspired in late nineteenth-century California. The Golden State was a squatter's republic—a society of white men who claimed no more land than they could use, and who promised to uphold agrarian republican ideals and resist monopoly, the nemesis of democracy. Their opposition to land monopoly became entwined with public discourse on Mexican land rights, industrial labor relations, immigration from China, and the rise of railroad and other corporate monopolies.

“This bold and ambitious book argues that resistance to land monopoly in the 1850s and 1860s informed later political and intellectual debates over industrial combinations and the shape of American institutions. From the perceived threat Mexican land grants posed to natural rights in an agrarian republic; to the growing fear of the 1870s and 1880s that the railroad and other corporations would crush free competition and equal opportunity; to the conclusion of many reformers by the 1890s that combination produced efficiencies of scale and organization that should be regulated rather than broken up, A Squatter’s Republic demonstrates the value of taking a new look at the relationship between nineteenth-century land policies and American politics, institutions, and values.” —Donald J. Pisani, University of Oklahoma

“Land reform and anti-monopoly politics have long been discussed obliquely, as an ever-present but poorly understood element in Gilded Age labor and farmers’ movements. No longer. Tamara Venit Shelton has made compelling sense of a central thread in nineteenth-century American politics, social movements, and social thought. A Squatter’s Republic is an important and satisfying book.” —Reeve Huston, Duke University

“In this first full-length historical study of ‘the land question,’ Tamara Venit Shelton dispels any lingering notions of a dichotomy between speculators and squatters—moral/immoral, agrarian/capitalist, rich/poor, or otherwise—and boldly asserts that the quest for squatters’ rights dominated local and state politics well beyond the Gold Rush. This book is a must read for scholars interested in the Golden State’s controversial history. Those looking to liven up their reading lists for their California and U.S. history seminars would also do well to consider it.” —David Vaught, Texas A&M University