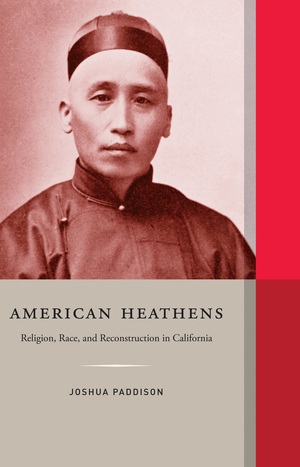 In the 19th-century debate over whether the United States should be an explicitly Christian nation, California emerged as a central battleground. Racial groups that were perceived as godless and uncivilized were excluded from suffrage, and evangelism among Indians and the Chinese was seen as a politically incendiary act. Joshua Paddison sheds light on Reconstruction’s impact on Indians and Asian Americans by illustrating how marginalized groups fought for a political voice, refuting racist assumptions with their lives, words, and faith. Reconstruction, he argues, was not merely a remaking of the South, but rather a multiracial and multiregional process of reimagining the nation.

Joshua Paddison is an American Council of Learned Societies New Faculty Fellow in the American Studies Program and the Department of Religious Studies at Indiana University.

“A must read not just for historians of race, religion, and Reconstruction, but also for anyone interested in the religious politics of multiculturalism. Widely and meticulously researched, Paddison’s study helps demolish the assumption that Reconstruction was solely an East Coast, white-black affair."--Edward J. Blum, San Diego State University

“Paddison resurrects the forgotten campaigns of Protestant reformers to bring Indians and Chinese into the tent of American citizenship, campaigns which boldly asserted the value of human universalism over the doctrine of Christian white male supremacy. California was the worse for their failure, and so—Paddison suggests—was the nation."--Josh Sides, California State University, Northridge

“American Heathens . . . places California and religion at the center of the national histories of Reconstruction and citizenship in the United States. It illustrates how competing visions of Christianity shaped formulations of race, and how religion influenced federal Indian policy. Its exploration of Chinese Christians and clergy is especially significant to Asian American history.”--Lawrence Culver, Utah State University

“Comfortably using the new methodological synthesis of social, cultural, and political history, Paddison sets out to reframe the standard narrative of Reconstruction, focusing our attention on California. American Heathens is . . . also a great local history, brought to life by a series of fascinating preachers, sojourners, and rabble-rousers."--Matthew Pratt Guterl, Indiana University