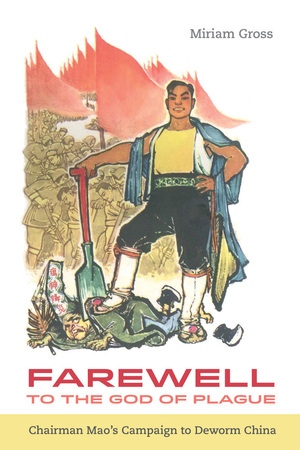 Farewell to the God of Plague reassesses the celebrated Maoist health care model through the lens of Mao’s famous campaign against snail fever. Using newly available archives, Miriam Gross documents how economic, political, and cultural realities led to grassroots resistance. Nonetheless, the campaign triumphed, but not because of its touted mass-prevention campaign. Instead, success came from its unacknowledged treatment arm, carried out jointly by banished urban doctors and rural educated youth. More broadly, the author reconsiders the relationship between science and political control during the ostensibly antiscientific Maoist era, discovering the important role of “grassroots science” in regime legitimation and Party control in rural areas.

Miriam Gross is Assistant Professor jointly in the history department and in the department of international and area studies at the University of Oklahoma, Norman.

"[Gross] provides a balanced and clear-eyed analysis of an important milestone in global health and of the early days of the PRC."—Pacific Affairs

“A fascinating and compelling account of the interconnection between Mao Zedong and the various campaigns to eradicate snail fever in China that illumines the recent history of public health in China and the history of political campaigns under radical Maoism. It promises to become essential reading for anyone interested in public health and large-scale public campaigns in China.”—Arthur Kleinman, coauthor of Deep China and A Passion for Society

"The PRC’s anti-schistosomiasis campaign has long been seen as one of the greatest achievements of Maoist mass mobilization. Through meticulous archival research, Gross has discovered the surprising reasons for the campaign’s ultimate success, along with eye-opening details about its numerous failures. Brilliantly linking elite Beijing politics to earthy rural realities, Farewell to the God of Plague forces us to rethink the roots of public health in China."—Ruth Rogaski, author of Hygienic Modernity: Meanings of Health and Disease in Treaty-Port China


"Farewell to the God of Plague explores socialist China's most celebrated public health campaign. This is not a triumphal story. The best-intentioned state plans go wildly awry, distorted by absolute poverty, competing cosmologies, and limited political vision. Readers will be sobered by the gaps between what rural people needed, what they wanted, and what they got. Miriam Gross's work deserves attention from anyone interested in public health, development, rural life, and a future less marked by suffering."—Gail Hershatter, Department of History, University of California, Santa Cruz
Read More >