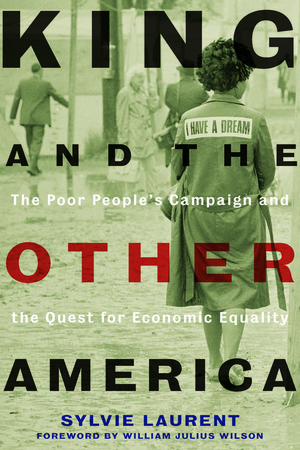 "An elegant and timely history of how black intellectuals have long made a case for the intersections between class and race."—The Nation

"A meticulously researched look into the development of King’s thought. . . .  Laurent’s important new book highlights the depth of the wisdom and organizing skill he brought to the movement for economic justice."—The Progressive

Shortly before his assassination, Martin Luther King Jr. called for a radical redistribution of economic and political power to transform the whole of society. In 1967, he envisioned and designed the Poor People’s Campaign, an interracial effort that was carried out after his death. This campaign brought together impoverished Americans of all races to demand better wages, better jobs, better homes, and better education. King and the Other America explores this overlooked and obscured episode of the late civil rights movement, deepening our understanding of King’s commitment to social justice and also of the long-term trajectory of the civil rights movement.

Digging into earlier radical arguments about economic inequality across America, which King drew on throughout his entire political and religious life, Sylvie Laurent argues that the Poor People’s Campaign was the logical culmination of King’s influences and ideas, which have had lasting impact on young activists and the public. Fifty years later, growing inequality and grinding poverty in the United States have spurred new efforts to rejuvenate the campaign. This book draws the connections between King's perceptive thoughts on substantive justice and the ongoing quest for equality for all.

This guest post is published as part of our blog series in conjunction with the Organization of American Historians conference in Philadelphia from April 4-7, 2019. Share using #OAH19. By Sylvie Laurent, …

Sylvie Laurent is a French cultural historian who studies race and class in the United States and teaches American Studies at Sciences Po (Paris). She was previously a W. E. B. Du Bois fellow at Harvard University.

“In her debut book, Laurent (American Studies/Paris Institute of Political Studies) draws on extensive research into Martin Luther King Jr.'s writings, speeches, and papers as well as archival and published sources to make a strong argument that his campaign for social justice went beyond race to encompass broad, transformative social and economic changes for all poor Americans. . . . King's analysis of social issues, as delineated in Laurent's useful reappraisal, seems as relevant today.”—Kirkus Reviews

"A meticulously researched look into the development of King’s thought. . . . As we commemorate King’s life and legacy, Laurent’s important new book highlights the depth of the wisdom and organizing skill he brought to the movement for economic justice."—The Progressive

“This powerful work invites a major reconsideration of American civil rights history, the significance of the Poor People’s Campaign of 1968, and especially of King’s deeply egalitarian socialist vision of society. The book transcends and negates traditional notions that King was a civil rights leader committed exclusively to the liberation of his African-American people. Without ever abandoning that objective, he expanded his range of activism in pursuing a vision of a fair and just society for all oppressed people. Laurent’s book above all restores King to his rightful and still profoundly under-recognized place in the history of militant African-American liberation figures.”—Truthdig

“The story [Laurent] tells is one that evokes the passions of the period known as the Sixties while carefully explaining the personalities and politics of the movement for economic and social justice at the time. Given the centrality of King to the Poor People’s Campaign, it is only natural that Laurent’s text makes King the centerpiece of her narrative.”—CounterPunch

"In her new book King and the Other America, historian Sylvie Laurent helps rescue the Poor People’s Campaign from this unfair reputation and makes a compelling case that it deserves to be not only better remembered but also more closely studied and emulated by the left today. . . . King and the Other America helps make another important argument. Situating the economic egalitarianism of the Poor People’s Campaign and Martin Luther King Jr.’s later years in a far longer history of black activism and social-democratic thinking, she helps map out the deeper intellectual and political roots of an entwined racial and economic egalitarianism that has been at the center of much of African-American politics for nearly a century. By doing so, Laurent offers us an elegant and timely history of how black intellectuals have long made a case for the intersections between class and race."—The Nation

“Engaging . . . . Our political scene is never far removed from Laurent’s narrative. . . .  A book for this moment, King and the Other America raises fresh questions about the validity of any historical sweep that fails to seriously consider the case of the Poor People’s Campaign and its legacy.”—Black Perspectives

“A rich and novel account of the Poor People’s Campaign, King and the Other America challenges common understandings of the movement and its significance in the histories of race, poverty, and social policy in the United States. It compels us to see the campaign as a pivotal moment in U.S. political history. Fascinating.”—William P. Jones, author of The March on Washington: Jobs, Freedom, and the Forgotten History of Civil Rights

“Sylvie Laurent’s deep research and thoughtful analysis links King's campaigns to overturn all forms of racial and economic oppression to African American history and to religious, labor, and freedom movements. She brilliantly provides us with a deeper understanding of how King’s legacy informs our continuing struggles for economic justice.”—Michael K. Honey, author of To the Promised Land: Martin Luther King and the Fight for Economic Justice

“Much has already been written about the life and legacy of Martin Luther King Jr., but Sylvie Laurent's King and the Other America nonetheless offers fresh and thought-provoking insights about a visionary who was more than a civil rights leader.”—Clayborne Carson, author of Martin's Dream: My Journey and the Legacy of Martin Luther King Jr.
“Sylvie Laurent's King and the Other America is a stunning reappraisal of the Poor People's Campaign. Laurent provides a rigorous historical analysis of the precedents for the campaign and the forces that shaped King's moral and political compass. This book is a vital read for anyone interested in eradicating injustice and inequality and for anyone seeking to understand why the United States today is so deeply economically and racially polarized. Despite its unflinching eye for the shortcomings of liberalism within the United States, Laurent finds hope by highlighting how the same radical forces that produced King and the Poor People's Campaign are once again beginning to emerge.”—Michael C. Dawson, author of Black Visions: The Roots of Contemporary African-American Political Ideologies
Read More >

Part I. The Long March
1. The Patriarchs
2. The Prophets of Justice
3. The City and the Church
4. The Torchbearer

Part II. The Campaign
5. The Pauper
6. An “American Commune”
7. A Counter-War on Poverty

Part III. The Vision
8. Facing Structural Injustice
9. A “Right Not to Starve”