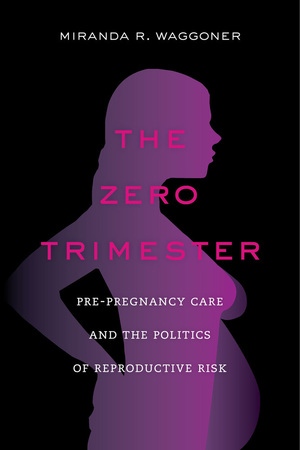 In the United States, a healthy pregnancy is now defined well before pregnancy begins. Public health messages encourage women of reproductive age to anticipate motherhood and prepare their bodies for healthy reproduction—even when pregnancy is not on the horizon. Some experts believe that this pre-pregnancy care model will reduce risk and ensure better birth outcomes than the prenatal care model. Others believe it represents yet another attempt to control women’s bodies.

The Zero Trimester explores why the task of perfecting pregnancies now takes up a woman’s entire reproductive life, from menarche to menopause. Miranda R. Waggoner shows how the zero trimester rose alongside shifts in medical and public health priorities, contentious reproductive politics, and the changing realities of women’s lives in the twenty-first century. Waggoner argues that the emergence of the zero trimester is not simply related to medical and health concerns; it also reflects the power of culture and social ideologies to shape both population health imperatives and women’s bodily experiences.

At this year’s American Sociological Association conference, we celebrate the work of our award-winning authors. Congratulations to our wonderful scholars, teachers, and activists. #ASA19 #ScholarActivist Abigail Leslie Andrews, Undocumented Politics: Place, Gender, and the …

As part of our “Resources for Your Summer Research” blog series, below are a few titles that you can add to your library and share in your research on reproductive justice.  Use discount …

"Breaks new ground. The 'zero trimester' concept is an excellent addition to the sociology of reproduction’s ever-developing glossary."—American Journal of Sociology

“A sophisticated study not only of a new medical trend, but also of a contemporary result of a century-old construction of modern pregnancy, modern motherhood and women’s health care.”—Social History of Medicine

"The findings of The Zero Trimester are particularly relevant to the recent upsurge of attention to maternal and infant deaths and near-deaths."—Social Forces

“This meticulously researched and beautifully written book not only reveals the deep roots of the modern idea of the zero trimester, but also makes clear the paradoxical consequences of anticipatory motherhood for women and infants, reproductive justice and gender equality. Sociologists, historians, and women themselves owe Miranda R. Waggoner a debt of gratitude for this lucid, engaging ethnography of the idea of ‘pre-pregnancy’ that examines what it really means to imagine all women as mothers all the time.”—Elizabeth Mitchell Armstrong, Princeton University


"Steeped in the history of women’s health and reproductive politics, The Zero Trimester breaks new ground in exposing deeply rooted assumptions about women as mothers in the new public health focus on pre-pregnancy. This well-written book will be essential reading for anyone interested in gender, medicine, and health policy."—Rene Almeling, Yale University, author of Sex Cells: The Medical Market for Eggs and Sperm

"Miranda Waggoner provides a compelling and important account of the rise of pre-pregnancy medical care and the deeply troubling consequences of the concomitant creation of the zero trimester. In the medical and cultural quest for perfect pregnancies and perfect babies, we have arrived at a place wherein all females are considered future pregnant women who are advised to reside within a medical-behavioral regime in order to protect fetuses and babies that do not yet exist and may not exist for years or decades to come (if at all). As one medical expert explains, the zero trimester begins the moment a future woman is herself conceived! The implications of pre-pregnancy care, should it become fully entrenched, are thus a vast expansion in the medical and social control of women’s behaviors and their bodies over the life course. And yet this new regime of social control does not emerge from advances in medical knowledge. Instead it is propped up largely by common sense and longstanding and limiting gender assumptions. As Waggoner warns us, anticipatory motherhood is a brave new world that has in part already arrived."—Kristin K. Barker, author of The Fibromyalgia Story

"Who knew pregnancy lasts for twelve months? Miranda Waggoner traces how pregnancy in the United States has become a twelve-month status for women. Looking back to the nineteenth century and forward to the present she shows how and why the zero trimester has been added on to the beginning of pregnancy and has become an institutionalized part of women’s reproductive health and health care in the twenty-first century."—Susan E. Bell, author of DES Daughters: Embodied Knowledge and the Transformation of Women’s Health Politics

“Miranda Waggoner has produced a sharp and compelling study of the rise of preconception care, one attentive to historical context, institutional agendas, and shifting definitions of motherhood. Her notion of the zero trimester is a useful addition to our collective knowledge about reproductive health and the production and management of risk.” —Monica J. Casper, Professor of Gender and Women’s Studies and Professor of Public Health, University of Arizona