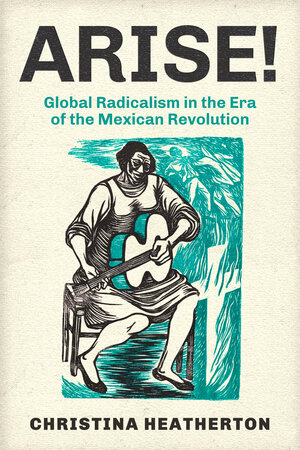 Arise! Global Radicalism in the Era of the Mexican Revolution

From art collectives and farm worker strikes to prison "universities," Arise! reconstructs how this era's radical organizers found new ways to fight global capitalism. Drawing on prison records, surveillance data, memoirs, oral histories, visual art, and a rich trove of untapped sources, Christina Heatherton considers how disparate revolutionary traditions merged in unanticipated alliances. From her unique vantage point, she charts the remarkable impact of the Mexican Revolution as radicals in this critical era forged an anti-racist internationalism from below.

Christina Heatherton is Elting Associate Professor of American Studies and Human Rights at Trinity College, Connecticut. She is coeditor of Policing the Planet: Why the Policing Crisis Led to Black Lives Matter.

"A provocative discussion of the importance of revolutionary Mexico in the left radical and revolutionary movements of the early twentieth century. . . . [Heatherton] has expanded the meaning and impact of both manifestations of the human desire for social justice and revolutionary freedoms."—Counterpunch

"Arise! is one of the most thrillingly original books I have read in many a year. Combining theoretical sophistication, prodigious research, and breathtaking global reach, the book offers profound, sometimes startling connections that put an entire era of worldwide revolution in a brilliant new light."—Marcus Rediker, coauthor of The Many-Headed Hydra: Sailors, Slaves, Commoners, and the Hidden History of the Revolutionary Atlantic

"Finally! The Mexican Revolution is restored to its rightful place as an integral act of modernity in modern history and a beacon of liberty to oppressed people throughout the world. This book demonstrates that the struggles of Mexico's peasantry, railroad workers, feminists, muralists, and others inspired and informed revolutionary movements on six continents for decades to come."—Paul Ortiz, author of An African American and Latinx History of the United States


"Imaginatively constructed, historically rich, theoretically deft, gorgeously written, and revolutionary in its ethos and politics, Arise! shows how our histories and struggles, here and across the globe, are deeply interconnected. This is a staggeringly good handbook for imagining a more just future."—Laleh Khalili, Professor of International Politics, Queen Mary University of London

"This lucid and compelling account shows the Mexican Revolution as a beacon for the most important global radical movements of its time. Like the other great revolutions of the modern era, the Mexican Revolution contained multitudes, and Arise! introduces them to us, not only as inspiring figures from the past, but also as harbingers of a better future."—Angela Zimmerman, author of Alabama in Africa: Booker T. Washington, the German Empire, and the Globalization of the New South

"Christina Heatherton's extraordinary history of radical politics across the globe is the book we urgently need. Set against the backdrop of the twentieth century's first revolutionary conflagration, the Mexican Revolution, Arise! tells the story of global capitalism's polyglot gravediggers and their struggle to overcome difference and distance to build a better world. We are living through a time when race, ethnicity, and nationality are presented as impermeable and intractable, but Heatherton culls multiple archives to present a different history forged through solidarity and struggle. In gorgeous prose, written with conviction and authority, Heatherton distills how the circuits of capital and empire created tremendous wealth and power for some but also tremendous enemies and powerful struggles that conjoined the oppressed in an international struggle from below."—Keeanga-Yamahtta Taylor, author of Race for Profit: How Banks and the Real Estate Industry Undermined Black Homeownership

"'Arise,' the first word of the song 'The International,' composed in the aftermath of the Paris Commune (1871), commands us to action, just as this book alerts us to the why and the what that make radicalism global, international, planetary, and universal. The book is a workers' story of construction: making a flag, making a map, making a university, making love, making a dress, and making history. The men and women—Enrique and Ricardo Flores Magón, Dorothy Healey, Elizabeth Catlett, Paul Shinsei Kōchi, Alexandra Kollontai, and M.N. Roy, to name only a few—are brilliant, brave, and colorful; the ideas are respectful, wise, fresh, tender, and indomitable; the spirit of the writing throughout is as free as the Mexican muralists and as glorious as the hymn that gives this book its title. You can hear in the background the roar of Pacific breakers, the clang of the closing prison gate, the factory whistle, the rhythmic rattle of a continental freight train. The reverberations continue: 'Awaken and arise,' they say! Here is history for the hungry soul."—Peter Linebaugh, author of Red Round Globe Hot Burning
Read More >

Introduction: How to Make a Rope

2 • How to Make a Map: Small Shareholders and Global Radicals in Revolutionary Mexico

3 • How to Make a University: Ricardo Flores Magón and Internationalism in
Leavenworth Penitentiary

4 • How to Make Love: Alexandra Kollontai and the Nationalization of Women

5 • How to Make a Living: Dorothy Healey and Southern California Struggles for
Relief and Revolution

6 • How to Make a Dress: Elizabeth Catlett, Radical Pedagogy, and Cultural Resistance

Conclusion: How to Make History