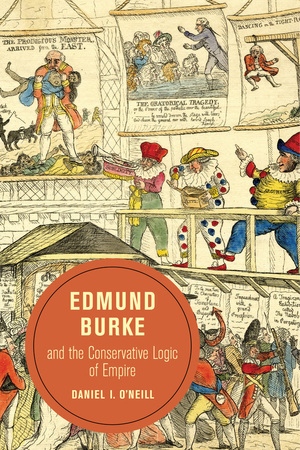 Edmund Burke, long considered modern conservatism’s founding father, is also widely believed to be an opponent of empire. However, Daniel O’Neill turns that latter belief on its head. This fresh and innovative book shows that Burke was a passionate supporter and staunch defender of the British Empire in the eighteenth century, whether in the New World, India, or Ireland.  Moreover—and against a growing body of contemporary scholarship that rejects the very notion that Burke was an exemplar of conservatism—O’Neill demonstrates that Burke’s defense of empire was in fact ideologically consistent with his conservative opposition to the French Revolution. Burke’s logic of empire relied on two opposing but complementary theoretical strategies: Ornamentalism, which stressed cultural similarities between “civilized” societies, as he understood them, and Orientalism, which stressed the putative cultural differences distinguishing “savage” societies from their “civilized” counterparts. This incisive book also shows that Burke’s argument had lasting implications, as his development of these two justifications for empire prefigured later intellectual defenses of British imperialism.

The UK, from Empire to Isolationism?

The news that the UK has voted to leave the EU has shocked many, and in the comings weeks we’ll learn more about what is next to come. For a respite from the …

"O’Neill’s analysis is a model of scholarship at its best: immersed in both original and secondary sources, cogently argued, and comprehensive in scope."—E.J. Eisenach Choice

"O'Neill's close reading of Burke's writings is a very necessary contribution to our knowledge of eighteenth century imperial ideology."—Canadian Journal of History

"Edmund Burke and the Conservative Logic of Empire is a book with a mission. O’Neill makes a passionate case for Burke’s conservative pro-imperialism while remaining judicious and broadly sympathetic in his engagement with opposing viewpoints. The book is carefully researched and deserves merit for incorporating all three flashpoints of Burke’s encounter with the British imperial expansion in the last third of the eighteenth century."—The Review of Politics

"O'Neill establishes Burke's defense of empire in detail, and it is a fascinating juxtaposition to most of the colonial rhetoric that has been parsed by political theorists."—Perspectives on Politics

"Edmund Burke and the Conservative Logic of Empire is a book of great originality, intellectual power and lucid argument, and a major reappraisal of Burke. The Burke who emerges from these pages is no proto-liberal who later and paradoxically became a conservative in the aftermath of 1789. On the contrary, O'Neill insists he was always a conservative and always an imperialist and that, with very few exceptions, his thought was exceptionally coherent, consistent, and systematic. This is an impressive piece of revisionism."—David Cannadine, author of Ornamentalism: How the British Saw Their Empire and The Undivided Past: Humanity Beyond Our Differences


"Bold and original, Edmund Burke and the Conservative Logic of Empire is an important intervention in debates about the history of imperial ideology and their continuing legacy. Challenging recent scholarly trends, Daniel O’Neill presents a powerful case that Burke offered a consistent and distinctive justification of empire, one that resonated through the nineteenth century and beyond."—Duncan Bell, University of Cambridge

"Recent scholars have decided that Edmund Burke was neither a conservative nor an imperialist. Daniel O'Neill assails those views and illuminates the modern politics of empire. His book is impeccably researched, powerfully argued, elegantly written, and devastatingly persuasive. Don't miss it."—Don Herzog, author of Poisoning the Minds of the Lower Orders