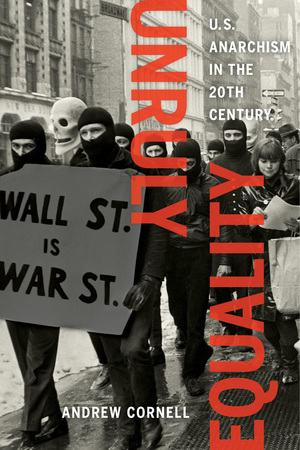 In this highly accessible history of anarchism in the United States, Andrew Cornell reveals an astounding continuity and development across the century. Far from fading away, anarchists dealt with major events such as the rise of Communism, the New Deal, atomic warfare, the black freedom struggle, and a succession of artistic avant-gardes stretching from 1915 to 1975.

Unruly Equality traces U.S. anarchism as it evolved from the creed of poor immigrants militantly opposed to capitalism early in the twentieth century to one that today sees resurgent appeal among middle-class youth and foregrounds political activism around ecology, feminism, and opposition to cultural alienation.

Left of the Left

The following excerpt from Andrew Cornell‘s introduction to Left of the Left: My Memories of Sam Dolgoff is reproduced with the kind permission of AK Press. Until very recently, the history of anarchism in the …

by Andrew Cornell This guest post is part of a series published in conjunction with the meeting of the American Historical Association in Atlanta. UC Press authors share insight into their research and stories that …

Andrew Cornell is an educator and organizer who has taught at Williams College, Haverford College, and Université Stendhal-Grenoble 3. He is the author of Oppose and Propose! Lessons from Movement for a New Society (AK Press).

"Points to a growing interest in the study of American anarchist history for readers of political and social history."—Jessica Moran Library Journal

"No matter how one feels about it, the current state of anarchism has represented something of a mystery:  What was once a mass movement based mainly in working class immigrant communities is now an archipelago of subcultural scenes inhabited largely by disaffected young people from the white middle class. Andrew Cornell's Unruly Equality: U.S. Anarchism in the Twentieth Century supplies the first convincing account of that transition. . . . Cornell's analysis serves as a much-needed check against the kinds of fairy tales that anarchists too often tell themselves about themselves. With its historical backing and its determined even-handedness, Unruly Equality simultaneously delivers a well-researched account of the 'transformation of the economic Left into the cultural Left' and offers an honest and nonsectarian assessment of the strengths and weaknesses of each. . . . Unruly Equality makes a real contribution to the history of American anarchism and may – if it is widely read and carefully considered – make a contribution to anarchism’s future as well."—Kristian Williams Toward Freedom

"Andrew Cornell’s Unruly Equality: U.S. Anarchism in the Twentieth Century comes as a precious gift. It is a sweeping, enthralling history of anarchism’s march—really, more of a shuffle—across the mid-twentieth century in the United States. Throughout eight chapters and 300 pages of storytelling and analysis—all backed by another 70 pages of notes—Cornell explicitly attempts to demystify how the classical anarchism of Bakunin and Kropotkin morphed into the contemporary anarchisms we now know—from today’s class strugglers and insurrectionists, to the anarcho-primitivists, and especially to the more intersectional anti-authoritarian current."—Jeremy Louzao Institute for Anarchist Studies

"Cornell’s book is a perfect fit for a broad array of social and political leaders and thinkers, from young activists who grew up scrawling anarchy symbols on their lockers, to academics who study the means and motives of social change."—Melissa Wuske Foreword

"Unruly Equality makes a real contribution to the history of American anarchism... Cornell's book is... strong on the facts... [and] tells a forgotten story."—Transcend Media Service

Andrew Cornell’s impressive volume is a major contribution. The heroic era of anarchism had, sadly, already passed when Cornell takes up his main focus, 1915–72, and the fine points of that earlier period remain locked into a variety of ethnic language sources – Russian to Hungarian and Finnish – that have yet to be tapped. Still, the smaller milieu of mostly English-language egalitarians, which experienced several prominent bursts after World War II, in the late 1960s, and again around the most recent turn of centuries, have a unique story to be told, and no one has told it better than Cornell.—Socialism and Democracy

"An ambitious stab at explaining how anarchist subculture and politics have cometo look the way they do in the present tense.... a thorough, readable introduction..."—Maximum RocknRoll Review

“Unruly Equality is history for movement builders. In recovering the captivating story of twentieth-century U.S. anarchism, Cornell provides crucial insights into the development of direct democracy, non-hierarchy, prefiguration, and other concepts animating contemporary global movements. Highly readable and theoretically sharp, this book is a vital tool for world changers and scholars alike.”—Marina A. Sitrin, author of Everyday Revolutions: Horizontalism and Autonomy in Argentina

“Unruly Equality shows that a new version of anarchist politics emerged in the postwar decades that was critical of mainstream culture and intent on challenging authority and transforming everyday life; the radical politics of the ’60s, which at the time seemed to come out of nowhere, had roots in fact in the new anarchism of the previous decades. Cornell’s scholarly—and at the same time lively and engaging—account of radical politics in a little-studied period gives us a deeper understanding of the development of radical politics in the latter half of the twentieth century. This book is crucial reading for anyone interested in that history.”—Barbara Epstein, author of The Minsk Ghetto 1941–1943: Jewish Resistance and Soviet Internationalism

PART I
THE DECLINE OF CLASSICAL ANARCHISM