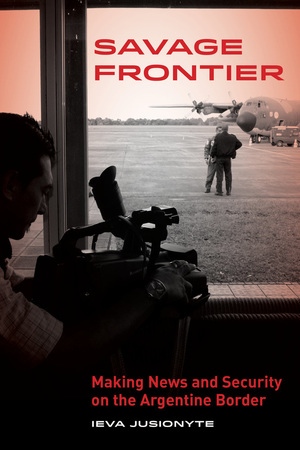 Savage Frontier Making News and Security on the Argentine Border

This highly original work of anthropology combines extensive ethnographic fieldwork and investigative journalism to explain how security is understood, experienced, and constructed along the Triple Frontera, the border region shared by Argentina, Brazil, and Paraguay. One of the major "hot borders" in the Western Hemisphere, the Triple Frontera is associated with drug and human trafficking, contraband, money laundering, and terrorism. It's also a place where residents, particularly on the Argentine side, are subjected to increased governmental control and surveillance.

How does a scholar tell a story about a place characterized by illicit international trading, rampant violence, and governmental militarization? Jusionyte inventively centered her ethnographic fieldwork on a community of journalists who investigate and report on crime and violence in the region. Through them she learned that a fair amount of petty, small-scale illicit trading goes unreported—a consequence of a community invested in promoting the idea that the border is a secure place that does not warrant militarized attention. The author's work demonstrates that while media is often seen as a powerful tool for spreading a sense of danger and uncertainty, sensationalizing crime and violence, and creating moral panics, journalists can actually do the opposite. Those who selectively report on illegal activities use the news to tell particular types of stories in an attempt to make their communities look and ultimately be more secure.

Ieva Jusionyte is Assistant Professor in the Department of Anthropology and the Center for Latin American Studies at the University of Florida. She is also the coordinator of the Crime, Law, and Governance in the Americas graduate program and interdisciplinary working group.

"A significant contribution to the ethnography of media . . . rich and open . . . interesting, and
enjoyable to read."—Dr Eleni Sideri Border Criminologies

"Savage Frontier is a well-crafted work that will appeal to scholars and students alike. In addition to its contribution to the critical anthropology of security, it builds on a growing anthropological literature of news and journalism."—City & Society

“Savage Frontier is a fascinating study of the entanglement of those who make news and those who make security in the allegedly ‘lawless’ Triple Frontier. In a zone of clandestine practices, public secrets, and camouflage statecraft, Ieva Jusionyte explores in vivid detail how journalists navigate illegal practices, codes of silence, and global and local discourses on (il)legality.”—Dominic Boyer, Rice University

“Jusionyte combines her experience as a professional journalist and anthropologist to examine local media production in the under-studied tri-border area. Through extensive fieldwork and a fresh ethnographic approach, Jusionyte fills a critical need for the study of Latin American media production, while also contributing to the growing field of security studies.”—Winifred Tate, author of Drugs, Thugs, and Diplomats: U.S. Policymaking in Colombia

“Savage Frontier explores how mass media are shaped by but also constitute borders. With a sharp ethnographic approach, Jusionyte explores how global, national, and local media form our conception of the Triple Frontier of Argentina, Brazil, and Paraguay.”— Josiah Heyman, University of Texas at El Paso

Introduction: Hide-and-Seek
1. Breaking the Code of Silence
2. Dispatches from the Wild
3. Global Village of Outlaws
4. Small Town, Big Hell
5. On and off the Record
6. Blurred Boundaries
Conclusion: Ethnography of In/visibility