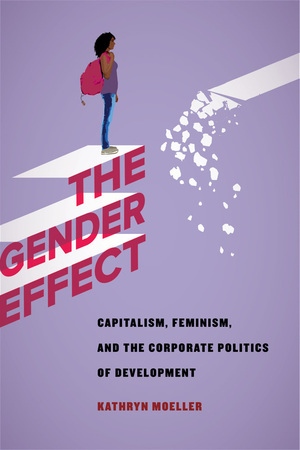 The Gender Effect Capitalism, Feminism, and the Corporate Politics of Development

How and why are U.S. transnational corporations investing in the lives, educations, and futures of poor, racialized girls and women in the Global South? Is it a solution to ending poverty? Or is it a pursuit of economic growth and corporate profit? Drawing on more than a decade of research in the United States and Brazil, this book focuses on how the philanthropic, social responsibility, and business practices of various corporations use a logic of development that positions girls and women as instruments of poverty alleviation and new frontiers for capitalist accumulation. Using the Girl Effect, the philanthropic brand of Nike, Inc., as a central case study, the book examines how these corporations seek to address the problems of gendered poverty and inequality, yet do so using an instrumental logic that shifts the burden of development onto girls and women without transforming the structural conditions that produce poverty. These practices, in turn, enable corporations to expand their legitimacy, authority, and reach while sidestepping contradictions in their business practices that often exacerbate conditions of vulnerability for girls and women. With a keen eye towards justice, author Kathryn Moeller concludes that these corporatized development practices de-politicize girls’ and women’s demands for fair labor practices and a just global economy.

We’re excited to announce that The Gender Effect: Capitalism, Feminism, and the Corporate Politics of Development by Kathryn Moeller is the winner of the 2018 National Women’s Studies Association Sarah A. Whaley Book …

In recognition of International Women’s Day, we celebrate the economic, social, and political accomplishments of women worldwide. From the #metoo movement to the protection of reproductive health to the tireless work of …

This weekend marks the one year anniversary of the largest single day protest in US history—the Women’s March—when on January 21, 2017, 4.2 million people marched across the US in more than 600 US …

Kathryn Moeller is Assistant Professor of Educational Policy Studies and an affiliate of the Department of Gender and Women’s Studies at the University of Wisconsin–Madison.

"The book is especially interesting for researchers involved in ethnography, feminism, corporate policy making, charitable giving, and the role of capitalism in enhancing and hurting worker conditions."—CHOICE

“A sobering and thought-provoking examination of something many of us have taken for granted: the unquestioned benefit and feminist appeal of the Girl Effect model.”—Philanthropy News Digest

"Every now and then, a book comes along that has the potential to widen the compass and shift the terms of debate in a research field in a decisive manner. Kathryn Moeller’s The Gender Effect is precisely such a book for the field of global development studies, and especially for critical research on the politics of gender, poverty, and development. . . . the book should be widely read and vigorously discussed as a source of crucial insights into how philanthrocapitalism works to disarm radical political projects, and what can and must be done to avoid this."—Community Development Journal

"The Gender Effect offers a vivid portrayal of a world where poor girls are imagined to be the next billion-dollar solution to poverty. Through a superb and incisive ethnography, Kathryn Moeller reveals the limits of corporatized development and the poverty of its imagination."—Michael Goldman, author of Imperial Nature: The World Bank and Struggles for Social Justice in the Age of Globalization


"This is a brilliantly researched, crisply written, and unflinchingly honest exposé of how investing in girls has become the preferred focus of twenty-first-century philanthrocapitalism. Kathryn Moeller reveals how corporations and the global development elite nimbly sidestep the radical dismantling of the current economic and political status quo, which would actually change the lives of all poor people, by elevating cosmetic improvements in the lives of girls as the silver-bullet solution for all our ills. Whether you are a philanthropist, a feminist, or a policy maker, this book will force you to open your eyes and challenge all your assumptions."—Kavita Ramdas, senior advisor to the Ford Foundation and former CEO of Global Fund for Women

"Kathryn Moeller’s The Gender Effect is a groundbreaking historical and contemporary ethnographic study of the US transnational corporate investment in girls and women in the Global South, including particularly the widespread belief in the business case of investing in girls and women. While much of the current literature is based primarily on representations and discursive analysis, Moeller’s long-term fieldwork brings us successfully behind the doors of the decision-making of corporations about their investment in girls, and the actual on-the-ground practices of corporations, including their 'search' for girls in specific places, such as Rio de Janeiro. Hers is truly an extraordinary and exciting contribution to the existent scholarly literature."—Melissa Suzanne Fisher, author of Wall Street Women

"This is an important read for any student or scholar of philanthropy and development in the twenty-first century. In rare ethnographic detail Kathryn Moeller not only sheds new light on relationships of philanthropic power, she also shows how hegemonic narratives about women and development are highly racialized and sexualized. She shows how the often unquestioned philanthropic promotion of girls as entrepreneurial engines of development more often enables corporate expansion than addresses the real structural causes of poverty and inequality."—Erica Kohl-Arenas, author of The Self-Help Myth: How Philanthropy Fails to Alleviate Poverty

"This is the most important book on gender and development in a decade. Combining careful ethnographic research and sharp analytical insight, Kathryn Moeller unsettles common-sense approaches to corporate investment in girls’ empowerment while highlighting the sites of encounter between feminism, corporations, international institutions, and NGOs that gave rise to the Girl Effect. It is essential reading for understanding contemporary relations of power in development."—Suzanne Bergeron, author of Fragments of Development: Nation, Gender, and the Space of Modernity

"As an important addition to the critical scholarship on NGOs and development, The Gender Effect examines the operations of what we call 'philanthrocapitalism.' Kathryn Moeller's transnational analysis of Nike, Inc.'s use of the agenda of 'empowerment' and development of the 'potential' of 'Third World girls' is essential reading for understanding imperialism and racial capitalism in our time."—Inderpal Grewal, author of Saving the Security State: Exceptional Citizens in Twenty-First-Century America

"The Gender Effect is a powerful critical analysis of the contradictory relationships between the corporate sector and the realities of gender internationally. Kathryn Moeller raises exactly the right questions that need to be asked about the hidden effects of seemingly progressive alliances between corporate actors and feminist policies. And her answers to these questions demand our continued attention."—Michael W. Apple, author of Can Education Change Society?