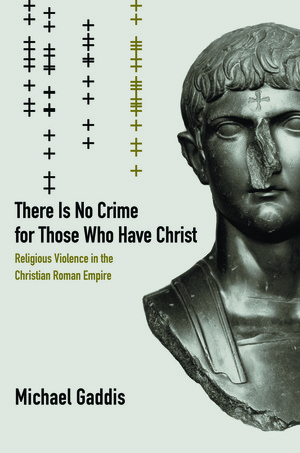 "There is no crime for those who have Christ," claimed a fifth-century zealot, neatly expressing the belief of religious extremists that righteous zeal for God trumps worldly law. This book provides an in-depth and penetrating look at religious violence and the attitudes that drove it in the Christian Roman Empire of the fourth and fifth centuries, a unique period shaped by the marriage of Christian ideology and Roman imperial power. Drawing together materials spanning a wide chronological and geographical range, Gaddis asks what religious conflict meant to those involved, both perpetrators and victims, and how violence was experienced, represented, justified, or contested. His innovative analysis reveals how various groups employed the language of religious violence to construct their own identities, to undermine the legitimacy of their rivals, and to advance themselves in the competitive and high-stakes process of Christianizing the Roman Empire.

Gaddis pursues case studies and themes including martyrdom and persecution, the Donatist controversy and other sectarian conflicts, zealous monks' assaults on pagan temples, the tyrannical behavior of powerful bishops, and the intrigues of church councils. In addition to illuminating a core issue of late antiquity, this book also sheds light on thematic and comparative dimensions of religious violence in other times, including our own.

Michael Gaddis is Associate Professor of History at the Maxwell School of Citizenship and Public Affairs at Syracuse University.

"This is an extremely interesting, stimulating and very useful book. Gaddis has succeeded in drawing together a wide geographic and chronological range of materials to give a nuanced and comprehensive picture. Though a prevalent theme in the ancient authors that has been studied on occasion, Christian violence has had to wait until now for a systematic treatment."—Susanna Elm, author of Virgins of God: The Making of Asceticism in Late Antiquity

"Gaddis tackles head on the darker side of familiar victories-the heroism and courage of martyrs, the toleration and expansion of Christianity, the cultivation and influence of holiness-and does so with verve and a breadth of reference and learning. His book provides not only a rounded picture of the late Roman Christian empire but also bases for reflection on contemporary issues."—Philip Rousseau, author of The Early Christian Centuries

Introduction
1. “What Has the Emperor to Do with the Church?”
Persecution and Martyrdom from Diocletian to Constantine
2. “The God of the Martyrs Refuses You”:
Religious Violence, Political Discourse, and Christian Identity in the Century after Constantine
3. An Eye for an Eye: Religious Violence in Donatist Africa
4. Temperata Severitas: Augustine, the State, and Disciplinary Violence
5. “There Is No Crime for Those Who Have Christ”:
Holy Men and Holy Violence in the Late Fourth and Early Fifth Centuries
6. “The Monks Commit Many Crimes”: Holy Violence Contested
7. “Sanctify Thy Hand by the Blow”: Problematizing Episcopal Power
8. Non Iudicium sed Latrocinium: Of Holy Synods and Robber Councils
Conclusion