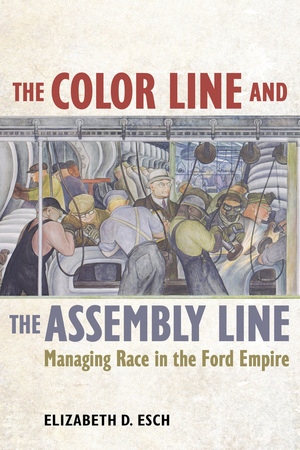 The Color Line and the Assembly Line tells a new story of the impact of mass production on society. Global corporations based originally in the United States have played a part in making gender and race everywhere. Focusing on Ford Motor Company’s rise to become the largest, richest, and most influential corporation in the world, The Color Line and the Assembly Line takes on the traditional story of Fordism. Contrary to popular thought, the assembly line was perfectly compatible with all manner of racial practice in the United States, Brazil, and South Africa. Each country’s distinct racial hierarchies in the 1920s and 1930s informed Ford’s often divisive labor processes. Confirming racism as an essential component in the creation of global capitalism, Elizabeth Esch also adds an important new lesson showing how local patterns gave capitalism its distinctive features.

Elizabeth D. Esch is Associate Professor of American Studies at the University of Kansas. She is the coauthor, with David Roediger, of The Production of Difference: Race and the Management of Labor in US History.

"In this exciting contribution to the historiography of the Ford Motor Company, Elizabeth D. Esch reframes a familiar Michigan history topic within historians' rich conversations about race and empire."—Michigan Historical Review

"Provides a useful starting point for examining Ford’s adaptation of its labor practices to differing national contexts. Historians and historically minded social scientists will find this book to be an accessible, informative, and engaging contribution to the literature about Ford."—Journal of Interdisciplinary History

"Esch provides a valuable study that shows how racism was an essential part of the creation of global capitalism."—Journal of American History

"Indispensable as a case study of one multinational corporation’s construction of social identities in very different countries and contexts, The Color Line and the Assembly Line also presents an exemplary, original, and generative model for analyzing how racial capitalism requires a complex interplay of sameness and difference for the purposes of both capital accumulation and ideological legitimation."—George Lipsitz, author of How Racism Takes Place

"If you think you know Fordism, think again. Elizabeth Esch offers a compelling new history of the style of mass production, social discipline, and consumerism that Henry Ford introduced not just to his Michigan auto plants but to the world. But where most have seen in Fordism a rationalized, impersonal, even potentially progressive American economic system, Esch reveals a transnational regime of white supremacy that sorted workers into racial categories for varying degrees of supervision, coercion, exploitation, and oppression. Tracing the history of Fordism from Detroit, Michigan, to KwaFord, South Africa, to Fordlandia, Brazil, to Hitler’s Berlin, Esch shows how racism is not an atavistic remnant destined to disappear with the progress of capitalist rationality, but an integral part of that capitalist rationality. The Color Line and the Assembly Line is history of capitalism at its best."—Andrew Zimmerman, author of Alabama in Africa: Booker T. Washington, the German Empire, and the Globalization of the New South

Introduction • The Color Line and the Assembly Line
1 • Ford Goes to the World; the World Comes to Ford
2 • From the Melting Pot to the Boiling Pot: Fascism and the Factory-State at the River Rouge Plant in the 1920s
3 • Out of the Melting Pot and into the Fire: African Americans and the Uneven Ford Empire at Home
4 • Breeding Rubber, Breeding Workers: From Fordlandia to Belterra
5 • “Work in the Factory Itself”: Fordism, South Africanism, and Poor White Reform
Conclusion • From the One Best Way to The Way Forward to One Ford—Still Uneven, Still Unequal