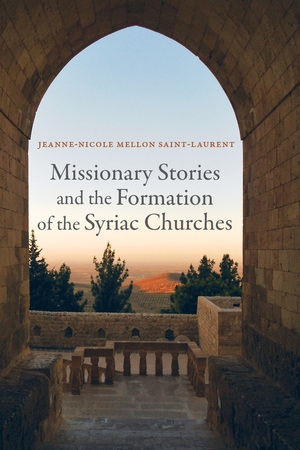 Missionary Stories and the Formation of the Syriac Churches analyzes the hagiographic traditions of seven missionary saints in the Syriac heritage during late antiquity: Thomas, Addai, Mari, John of Ephesus, Simeon of Beth Arsham, Jacob Baradaeus, and Ahudemmeh. Jeanne-Nicole Mellon Saint-Laurent studies a body of legends about the missionaries’ voyages in the Syrian Orient to illustrate their shared symbols and motifs. Revealing how these texts encapsulated the concerns of the communities that produced them, she draws attention to the role of hagiography as a malleable genre that was well-suited for the idealized presentation of the beginnings of Christian communities. Hagiographers, through their reworking of missionary themes, asserted autonomy, orthodoxy, and apostolicity for their individual civic and monastic communities, positioning themselves in relationship to the rulers of their empires and to competing forms of Christianity. Saint-Laurent argues that missionary hagiography is an important and neglected source for understanding the development of the East and West Syriac ecclesiastical bodies: the Syrian Orthodox Church and the Church of the East. Given that many of these Syriac-speaking churches remain today in the Middle East and India, with diaspora communities in Europe and North America, this work opens the door for further study of the role of saints and stories as symbolic links between ancient and modern traditions.

"This important study of late antique hagiography offers an exciting new way to read these fascinating texts. By explaining the symbols and shared motifs that make Syriac missionary texts such vibrant documents, Saint-Laurent offers a sophisticated reading of the lives of some of Syriac Christianity's most important figures. She also reveals the process through which Syriac Christian communities used their historical legacy to understand contemporary realities. This book is essential reading for all scholars concerned with the formation of Christian communities in late antiquity."—Edward Watts, Alkiviadis Vassiliadis Endowed Chair and Professor of History at the University of California, San Diego

"Saint-Laurent establishes the vital link between the literary construction of missionary lives and their use in galvanizing communities, negotiating conflicts with contemporary power structures, and establishing orthodoxies infused with apostolic prerogative. In this study, then, we see not only the birth of Syriac missionary literature but also the invention of the Christian Syrian orient and its early struggle for survival and legitimacy."—Kristian S. Heal, Director of the Center for the Preservation of Ancient Religious Texts at Brigham Young University

Introduction: Missionary Narratives in the Syriac Tradition
1. Saint Thomas, Missionary Apostle to India
2. The Teaching of Addai: Founding a Christian City
3. Mari as Apostle to the Church of Persia
4. John of Ephesus as Hagiographer and Missionary
5. Legends of Simeon of Beth Arsham, Missionary to Persia
6. Hagiographical Portraits of Jacob Baradaeus
7. Ahoudemmeh among the Arabs
Conclusion