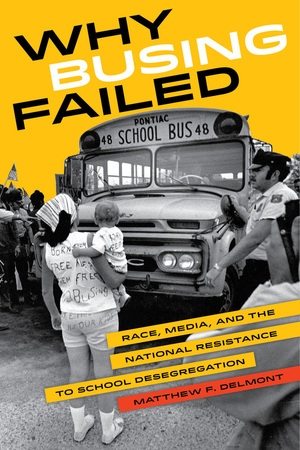 Why Busing Failed Race, Media, and the National Resistance to School Desegregation

We’re kicking off a recurring series of posts today which highlight UC Press books of note that have been featured recently in the media. Since we continually strive to publish works that will be relevant for …

Matthew F.Delmont is Professor of History at Arizona State University and author of The Nicest Kids in Town: American Bandstand, Rock ‘n’ Roll, and the Struggle for Civil Rights in 1950s Philadelphia.

"By looking at the antibusing uprisings that were presented in mainstream media, this recommended narrative presents civil rights through the lens of media studies and offers an entirely new way of seeing how recent history was written."—Library Journal

"Why Busing Failed is an ambitious and well-researched account of an important aspect of the struggle for racial and educational equality in the United States."—Pacific Historical Review

"With Why Busing Failed Matthew Delmont dispels the conventional wisdom on segregation and its convenient narrative of Southern demagogues and Northern heroes. In these pages is a thoroughly chronicled, frustrating history that establishes segregation as a national system and demonstrates its tragic impact upon American education today. This book should be required reading."—Jelani Cobb, author of The Substance of Hope: Barack Obama and the Paradox of Progress

"In this important work, Matthew Delmont takes the biggest scapegoat for our failure to integrate our schools, and then systematically dismantles the story we thought we knew. Why Busing Failed dispels the all-too-convenient narrative about the disaster of busing as a tool for integration and instead shows that, as black activists noted decades ago, the problem was never the bus, it was us. Carefully researched and compellingly written, Why Busing Failed is an indictment of both politicians and mainstream news organizations that aided and abetted small numbers of white parents in shifting the national narrative of integration from a constitutional and moral imperative to an impossible inconvenience."—Nikole Hannah-Jones, The New York Times Magazine


"Delmont tells an eye-opening story of the struggle for school desegregation outside the South in the wake of the civil rights movement. The Southern campaign received at least moderately positive media coverage. But as Delmont reveals in this deeply researched and engagingly written history, the situation was very different in places like New York, Chicago, Pontiac, Michigan, and—most famously—Boston. Delmont shows how Northern anti-segregation activists were able to mobilize the 'busing' issue, along with the media strategies of the Southern civil rights movement, to generate sympathetic media treatment. This book provides a much-needed corrective to the enduring assumption that the American mass media were cheerleaders in the fight for racial equality in the 1960s and 70s."—Aniko Bodroghkozy, author of Equal Time: Television and the Civil Rights Movement

"Matthew Delmont's brilliant study of 'busing' upends much of what we think we know about the media and the civil rights movement. If you want to understand where we are today in this country--and why school segregation is so ubiquitous and so accepted—read this book.  'Busing' didn't fail; our resolve to desegregate schools did. This may be the most important book you read this year."— Jeanne Theoharis, Distinguished Professor of Political Science at Brooklyn College and author of The Rebellious Life of Mrs. Rosa Parks

Introduction
1 • The Origins of “Antibusing” Politics: From New York Protests to the Civil Rights Act
2 • Surrender in Chicago: Cities’ Rights and the Limits of Federal Enforcement of School Desegregation
3 • Boston before the “Busing Crisis”: Black Education Activism and Official Resistance in the Cradle of Liberty
4 • Standing against “Busing”: Bipartisan and National Political Opposition to School Desegregation
5 • Richard Nixon’s “Antibusing” Presidency
6 • “Miserable Women on Television”: Irene McCabe, Television News, and Grassroots “Antibusing” Politics
7 • “It’s Not the Bus, It’s Us”: The Complexity of Black Opinions on “Busing”
8 • Television News and the Making of the Boston “Busing Crisis” 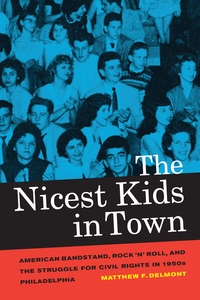 The Nicest Kids in Town