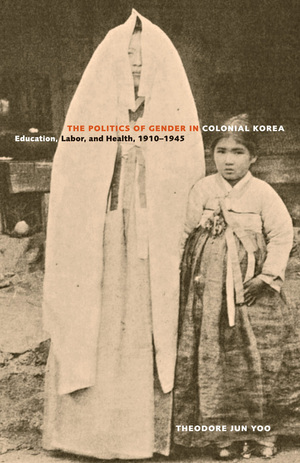 The Politics of Gender in Colonial Korea Education, Labor, and Health, 1910–1945

This study examines how the concept of "Korean woman" underwent a radical transformation in Korea's public discourse during the years of Japanese colonialism. Theodore Jun Yoo shows that as women moved out of traditional spheres to occupy new positions outside the home, they encountered the pervasive control of the colonial state, which sought to impose modernity on them. While some Korean women conformed to the dictates of colonial hegemony, others took deliberate pains to distinguish between what was "modern" (e.g., Western outfits) and thus legitimate, and what was "Japanese," and thus illegitimate. Yoo argues that what made the experience of these women unique was the dual confrontation with modernity itself and with Japan as a colonial power.

Theodore Jun Yoo is Associate Professor in the Department of Korean Language and Literature at Yonsei University in Seoul, South Korea.

“A valuable stepping stone toward the discourse analysis of gender issues in the colonial historiography, and will provide a good source for classes on colonial modernity or colonial gender politics.”—Korean Studies

“A pleasure to read and accessible to the non-specialist . . . There is no single book that presents so much information on this aspect of Korean history and does it so well.”—American Historical Review

“Few books on Korean history bring to life the complexity as well as the vitality of their subject as does The Politics of Gender in Colonial Korea.”—Korean Quarterly

“Yoo’s book is characterized by solid scholarship and compelling historical detail. . . . The result is a richly detailed, engaging, and theoretically elegant examination of gender ideology in colonial Korea. It will prove a valuable resource to those with research and teaching interests in Asia, gender, and colonialism. It is accessible enough to be used in the undergraduate classroom and sophisticated enough to be incorporated into graduate seminars.”—American Journal of Sociology

"Thorough and thoughtful.Yoo's densely researched history, filled with compelling stories, makes an important intervention in the field of gender and colonialism."—Antoinette Burton, University of Illinois