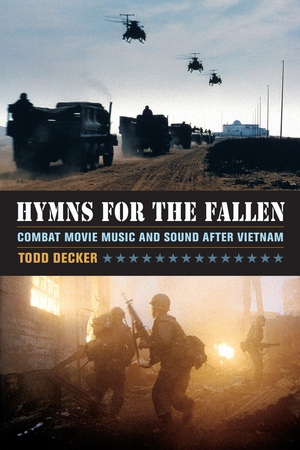 Hymns for the Fallen Combat Movie Music and Sound after Vietnam

In Hymns for the Fallen, Todd Decker listens closely to forty years of Hollywood combat films produced after Vietnam. Ever a noisy genre, post-Vietnam war films have deployed music and sound to place the audience in the midst of battle and to provoke reflection on the experience of combat. Considering landmark movies—such as Apocalypse Now, Saving Private Ryan, The Thin Red Line, Black Hawk Down, The Hurt Locker, and American Sniper—as well as lesser-known films, Decker shows how the domain of sound, an experientially rich and culturally resonant aspect of cinema, not only invokes the realities of war, but also shapes the American audience’s engagement with soldiers and veterans as flesh-and-blood representatives of the nation. Hymns for the Fallen explores all three elements of film sound—dialogue, sound effects, music—and considers how expressive and formal choices in the soundtrack have turned the serious war film into a patriotic ritual enacted in the commercial space of the cinema.

We are pleased to announce that five of our titles have been awarded Outstanding Academic Title for 2017 by CHOICE! This selective list, announced in every year’s January issue, consists of only about ten percent of the …

See Dunkirk to Hear It: A Spoiler-Free Guide to Music and Sound in Christopher Nolan’s New War Movie

by Todd Decker, author of Hymns for the Fallen: Combat Movie Music and Sound after Vietnam Director Christopher Nolan’s Dunkirk, opening in theaters this weekend in the US, sounds better than any …

Todd Decker is Professor of Music at Washington University in St. Louis. The author of four books on American commercial music and media, he has lectured at the Library of Congress, London’s Victoria and Albert Museum, and LabEx Arts-H2H in Paris.

"The measure of any study, regardless of the field, is its ability to provide new insights and approaches to critical analysis and thus facilitate greater understanding. Such new approaches are particularly important for the mechanisms of cinematic genre because of genre’s dynamic tendency to reflect a given period’s cultural attitudes. Decker’s monograph accomplishes all of this. It is a welcome addition to the literature and will not gather dust on the bookshelf of anyone who is interested in film form in general and in the film score in particular."—American Music

"In this dynamic study, Todd Decker explores the significance of sound in four historic cycles of Hollywood combat films. Made in the decades following the Vietnam War, these movies reflect the changing public psyche, with shifting perspectives on soldiers, veterans, sacrifice, catharsis, and memorialization. What the audience hears is key to evolving narrative and political strategies, and the insightful holistic focus on all soundtrack elements—dialogue, sound, and music—reveals the complex ethical territories and representational maneuvers of films that exploit violence while simultaneously making moral statements about violence."—Miguel Mera, City, University of London

"Decker has captured the aesthetic, emotional, and narrative sorcery of modern combat films' soundscapes, and has woven engaging and articulate close analyses of the musical, vocal, and sound-effect components that illustrate the most bombastic and sensitive filmic moments. He reveals the sonic elegance behind the tragic despair."—Vanessa Theme Ament, author of The Foley Grail: The Art of Performing Sound for Film, Games, and Animation


"By undertaking a meticulous and far-reaching sound analysis of a broad array of war films, Decker reveals hidden continuities that a normal audience member could never discern. This is extremely important work, because these hidden structures are subtly shaping contemporary attitudes to war, and to violence more broadly. Decker doesn’t merely describe how music, voice, and sound work in these films (although he does do this, admirably); he also helps us understand how these films work on us. Given the extent to which popular ideas about war and ethics are formulated through cinematic experiences, this book should be required reading."—J. Martin Daughtry, author of Listening to War: Sound, Music, Trauma, and Survival in Wartime Iraq
Read More >

PART I. THE PRESTIGE COMBAT FILM
1. Movies and Memorials
2. Soundtracks and Scores