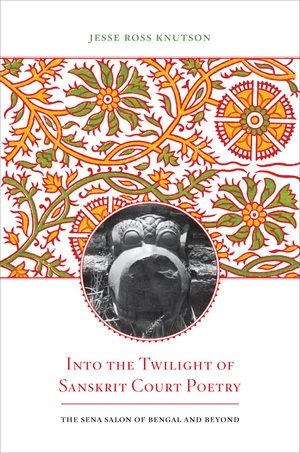 The Political Poetic of the Sena Court

History can be written in many genres, including kāvya.

In actual fact, each living ideological sign has two faces, like Janus. Any current curse word can become a word of praise, any current truth must inevitably sound to many other people as the greatest lie. This inner dialectic quality of the sign comes out fully in the open only in times of social crises or revolutionary changes.

What was said about life in Sanskrit verse constituted a central fact of life; it referenced itself to lived reality even as it made itself a lived reality. Sanskrit kāvya, in anthology and epigraphy as well as in hosts of individual masterpieces, articulated as it was articulated by the ruling dynasties of ancient and early medieval South Asia. Rarely though does a detailed discussion of poetry make its way into a historical monograph. Yet nothing could be more historical and more material than a kingdom's moral landscape: etched into minds by poets, copied onto paper or leaf by scribes, scraped into metal or stone by artisans. In the early medieval period, the textual life of kingdoms assumes a special salience for the student of South Asian history. For as sovereignties shrunk in size and hegemony, their claims about themselves took on a new topology, expanding and differentiating, spawning newly formed aesthetic and moral territories for rule.

All of this could not be truer for the twelfth- and thirteenth-century king of Bengal, Lakṣmaṇasena. This chapter interprets literature's new historical role at the end of the early medieval period in Bengal, showing historical causality operating within literature as well as literature's own potential for historical causal efficacy. I isolate a cluster of poetic elements that were inseparable from descriptions of the king, and thereby sketch the parameters of an official political poetic. I argue that when it came to the portrayal of concrete reality, for the most part a finite set of forms and contents confronted contemporary authors as a historical necessity. I then attempt to define the historical role of these poetic elements, showing their proximity to the imminent Khalji invasion (Ramadan A.H. 601, early May 1205 C.E.) and the attendant crisis and restructuring of the Sena state.

The chapter begins by looking at the anthologist Śrīdharadāsa's praise poems about the king, tracing a basic logic of representation that can be found echoed throughout the Saduktikaṛṇāmṛta. It then examines the verses ascribed to Jayadeva, which can be taken as representations of the king and his actions. Here I further develop the sketch of a political poetic, and also look at some thematics that suggest a much more immediate relationship to political history: poems about fighting with enemies, among them wicked foreigners (mleccha). The chapter then considers the poetry ascribed to the members of the Sena royal family, again finding consonance with an official poetic, and in addition tracing suggestions of distinctive immediate concerns related to membership in the political elite. I then turn to a peculiar subsection of poems devoted to a political imagination of space and geography, further exploring a poetics of sadism and desperation, meditating on the poetics of control over spaces and places that have been loved and lost. This discussion of the Sena geographical-territorial imagination offers a vision of a new, hard-won negotiation between historical fantasy (which has its own long history in Sanskrit kāvya) and historical reality. The chapter's argument then moves outside the Saduktikarṇāmṛta to the depiction of Lakṣmaṇasena in a narrative poem by Dhoyī devoted to the king's twinned martial and erotic virtues, extending further the picture of the political poetic and focusing on its uncompromisingly sadistic attitude toward women.

Having defined an official poetic through this series of snapshots, I can then begin to trace its margins, looking at a segment of the anthology devoted to royal panegyric in general (cāṭu). Intriguingly, alongside the official poetic, we find examples of idiosyncratic poems that exceed it, offering what was perhaps most self-contained and self-referential in Sena literary life, and allowing us to trace a historical dynamic at once distinct and inseparable from that of the official poetic: the proud assertion of a Sanskrit literary provincialism in the context of a shrinking and threatened state.

This chapter's complex cumulative exercise offers a unique perspective on Sena literary and political apparatuses. It is a study in details and their repetition, which can only offer a deep texture in being somewhat tirelessly accumulated. Its project is an exercise in tracing a different level both of rhetoric and historical causality from that which is conventionally recognized in studies of Sanskrit poetry. By talking about rhetoric in terms that transcend emic definitions of poetic figures, and abandoning rigid formalism and positivism in characterizing rhetorico-formal tendencies, one can begin to trace patterns that have, along with their historicity, been previously unrecognized. Sometimes their specificity is relative rather than absolute. I am not attempting to establish the utter uniqueness of most of the poetry examined here, even though I do point out some unique features, and in certain aspects this account could be made to overlap with a broader history of poetry at the close of the early medieval period. However, a crucial aspect of this study's potential for drawing attention to a different level of poetic historicity is its scale, which, in contrast to the vast majority of work on Sanskrit literary history, tends toward the microhistorical.

Neither do I wish to identify a relationship of rigid mechanical causality between this poetry and its world. I draw attention to patterns, which are historical. I examine how the order of the world and the order of its literary artifacts make sense in terms of each other. Thus the knot of causality here is tied perhaps less tightly than a traditional historian would like. Nevertheless, if we are to learn history from poetry in new ways, some allowance should perhaps be made for less tightly binding hermeneutic ventures.

Accounts of the King

Verses from the beginning and end of the royal anthology Saduktikarṇāmṛta (A Nectar of Poetry for the Ears) illustrate one of the most basic features of the Sena political poetic. In the poems discussed below, military valor and commitment to spiritual exercise are conjoined, but just as often one finds dexterity in love juxtaposed with cruelty, or violence with charity. Disparate or potentially mutually exclusive virtues fall into an apparently natural apposition. I call this the "Janus-virtue" trope; in it I identify one of the Sena court's most simple and pervasive ideological motifs.

The first three verses of the collection trace a thread from the king, through the anthologist's father, to the anthologist himself, emphasizing the coexistence of martial and spiritual virtues in each:

He carries a treasure of heroism as well as asceticism; there is no limit to his knowledge or his charity. He has conquered his enemies and also his senses. He is a guru to both emperors and yogis. There is only one such king on the earth, the majestic Lakṣmaṇasena, who though living has attained spiritual liberation. (1)

His crest-jewel of chief feudatories, his friend, and a matchless repository of affection, the majestic Vaṭudāsa by name was chosen as his military representative. Removing heat and darkness, casting moonbeams of fame, he was a full moon made of the nectar of perennial virtues. (2)

And that repository of vast virtues called Śrīdharadāsa came from him. Since childhood he could not restrain his measureless might, and he always lent majesty to the houses of those learned in the Veda, which was equally famous in gatherings of scholars. His devotion reposes in the moon rays of the toenails of the lotus-feet of Śrī's lord Viṣṇu. (3)

In the first verse, Lakṣmaṇasena conspicuously combines opposites. The same trope is present in the depiction of Vaṭudāsa and his son, in the next two verses. By the poems' logic, might and right fall into an easy relationship. The aesthetic formulation of the Janus-virtue trope alludes to a world imagined to be itself aesthetically formulated, where violence forms a dependent factor inseparable from spiritual virtues. It would be wrong to see this rhetorical feature as the singular invention of the Sena poets, for it can be located widely elsewhere. Compare for example the defining fourth-century Allahabad pillar inscription of Samudragupta, which is generally structured by something like the Janus-virtue trope, in which the king is referred to throughout as both warrior and poet-scholar: "his glory travels by many paths and is continually heaped higher by his exalted charity and force of arms, tranquility and study of the śāstras." The martial and the spiritual did not however eternally coincide. Compare the twelfth-century poet-historian of Kashmir, Kalhaṇa:

Seeing everything everywhere the same is indeed a virtue for a yogi, but for a king, it is a great fault and a source of disgrace.

What is distinctive in the present context is the irrepressible consistency with which the trope is applied to Lakṣmaṇasena and those closest to him.

At the close of the anthology, the Janus-virtue trope is again applied to Lakṣmaṇasena's right-hand man, but here in terms exactly parallel to those applied to the king himself. The final section of the Saduktikarṇāmṛta, "Praise of the Military Representative (pratirājastuti)," is entirely devoted to the anthologist's father and it contains five verses by local poets. One verse by the judge (dharmādhikaraṇa), Madhu, reemphasizes Vaṭudāsa's sharing in the deployment of royal violence, reconfirming his status as vanguard feudatory:

He sustains the joy of the wise and gives fever to enemies' ears. Worshipping again and again the lotus foot of the primeval boar [incarnation of Viṣṇu], he is a good friend and

At the turn of the twelfth-century into the thirteenth, at the court of King Laksmanasena of Bengal, Sanskrit poetry showed profound and sudden changes: a new social scope made its definitive entrance into high literature. Courtly and pastoral, rural and urban, cosmopolitan and vernacular confronted each other in a commingling of high and low styles. A literary salon in what is now Bangladesh, at the eastern extreme of the nexus of regional courtly cultures that defined the age, seems to have implicitly reformulated its entire literary system in the context of the imminent breakdown of the old courtly world, as Turkish power expanded and redefined the landscape. Through close readings of a little-known corpus of texts from eastern India, this ambitious book demonstrates how a local and rural sensibility came to infuse the cosmopolitan language of Sanskrit, creating a regional literary idiom that would define the emergence of the Bengali language and its literary traditions.

Jesse Ross Knutson is Assistant Professor of Sanskrit and Bengali in the Department of Indo-Pacific Languages and Literature at the University of Hawai'i, Manoa.

"Knutson should be commended for his insightful literary-historical approach, placing literature within a broader social and political context, which is still rare among Sanskritists. Instead of a superficial sweep of many literary works, he concentrates on a relatively small corpus from Bengal and finds numerous ways in which its Sanskrit literature was becoming more localized and more rustic."—Cynthia Talbot, University of Texas at Austin

"Following meticulous research, Knutson takes the reader on a nuanced journey through the literary culture of the Sena court and its vernacular legacy over the centuries. Knutson's approach to his analysis is impressive and could have wide applicability."—Kunal Chakrabarti, author of Historical Dictionary of the Bengalis

Conclusion: The Tropography of the Sena World