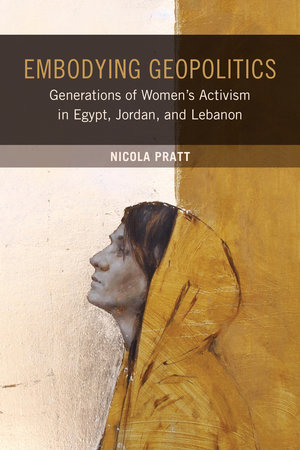 This post is part of our #MESA2020 blog series. Learn more at our MESA virtual exhibit. For this year’s virtual MESA conference, UC Press author Nicola Pratt joined us to talk about her …

"This is an exceptional book that makes an important and original contribution to the study of the geopolitics of the MENA region. Effectively using the rich resource of activist women’s narratives, Nicola Pratt brings fresh, authoritative, and contextualized understandings of its gendered and spatialized power relations."—Charles Tripp, author of The Power and the People: Paths of Resistance in the Middle East

"This is a much needed book by one of the most astute analysts of Middle Eastern women's politics. Richly textured, covering a broad historic sweep, and boasting a symphony of Arab women's voices, Pratt shows us the long arc of Arab women's activism over generations. The Arab women activists featured in this thought-provoking book are not only deeply aware of and critical towards the context of their own struggle but also of how their activism plays out in the geopolitical milieu that inevitably shapes Middle Eastern politics. By refusing to uncouple the domestic and the transnational, the local and the global, and by giving a sense of the genealogy and depth of feminisms in the region, Embodying Geopolitics provides deeply valuable insights into the lives and praxis of Arab women in Egypt, Jordan, and Lebanon."—Laleh Khalili, author of Sinews of War and Trade: Shipping and Capitalism in the Arabian Peninsula


"Innovative, creative, authentic, and grounded in careful engagement with relevant critical and feminist interventions across anthropology, political science, and geography, this book is a tour de force and a joy to read—it is as insightful as it is important."—Laura J. Shepherd, editor of Gender Matters in Global Politics: A Feminist Introduction to International Relations

"The rich fieldwork and analytical rigor with which Pratt contextualizes women activists make for an especially engaging read."—Sune Haugbølle, author of War and Memory in Lebanon
Read More >

Introduction: Embodying Geopolitics in the Middle East and North Africa
1 • Female Respectability and Embodied National Sovereignty
2 • The 1967 Defeat and Its Aftermath: The Breakdown of the Gender Order and the Expansion of Women’s Activism
3 • The Gendered Effects of Political Repression and Violence in the 1970s and 1980s
4 • The Political Economy and Geopolitics of Women’s Activism after the Cold War
5 • Women’s Rights as Geopolitical Discourse: The Struggle over Geography in the Post–Cold War Period
6 • The Struggle over Gender at the Heart of the Arab Uprisings
7 • The Gendered Geopolitics of Fear and Counterrevolution
Conclusion