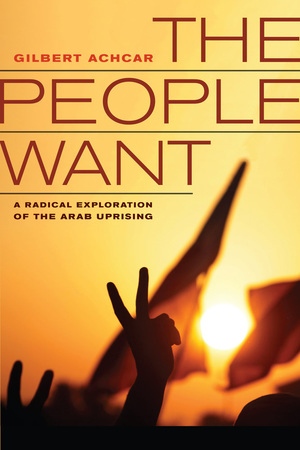 The People Want A Radical Exploration of the Arab Uprising

“The people want . . .”: This first half of slogans chanted by millions of Arab protesters since 2011 revealed a long-repressed craving for democracy. But huge social and economic problems were also laid bare by the protestors’ demands.

Simplistic interpretations of the uprising that has been shaking the Arab world since a young street vendor set himself on fire in Central Tunisia, on 17 December 2010, seek to portray it as purely political, or explain it by culture, age, religion, if not conspiracy theories. Instead, Gilbert Achcar locates the deep roots of the upheaval in the specific economic features that hamper the region’s development and lead to dramatic social consequences, including massive youth unemployment. Intertwined with despotism, nepotism, and corruption, these features, produced an explosive situation that was aggravated by post-9/11 U.S. policies. The sponsoring of the Muslim Brotherhood by the Emirate of Qatar and its influential satellite channel, Al Jazeera, contributed to shaping the prelude to the uprising. But the explosion’s deep roots, asserts Achcar, mean that what happened until now is but the beginning of a revolutionary process likely to extend for many more years to come.

The author identifies the actors and dynamics of the revolutionary process: the role of various social and political movements, the emergence of young actors making intensive use of new information and communication technologies, and the nature of power elites and existing state apparatuses that determine different conditions for regime overthrow in each case. Drawing a balance-sheet of the uprising in the countries that have been most affected by it until now, i.e. Tunisia, Egypt, Yemen, Bahrain, Libya and Syria, Achcar sheds special light on the nature and role of the movements that use Islam as a political banner. He scrutinizes attempts at co-opting the uprising by these movements and by the oil monarchies that sponsor them, as well as by the protector of these same monarchies: the U.S. government. Underlining the limitations of the “Islamic Tsunami” that some have used as a pretext to denigrate the whole uprising, Gilbert Achcar points to the requirements for a lasting solution to the social crisis and the contours of a progressive political alternative.

Gilbert Achcar is Professor at the School of Oriental and African Studies (SOAS, University of London). He grew up in Lebanon. His books include The Clash of Barbarisms, translated into thirteen languages; Perilous Power: The Middle East and U.S. Foreign Policy, co-authored with Noam Chomsky; and the critically acclaimed The Arabs and the Holocaust.

"How does one tell the story of a revolutionary moment when the cataclysmic events are still underway, when the future remains remarkably uncertain, and where upheavals continue to characterise the day-to-day conduct of politics? Gilbert Achcar’s The People Want provides a felicitous response to this question. … Any reader who would like a clear-eyed, theoretically grounded, and lucid assessment of what the Arab uprisings have wrought so far would benefit from this book."—Laleh Khalili The Middle East in London

"Telling a story—let alone one as complicated as that of the Arab uprisings and their historical lineage—from beginning to end is a task few can complete. And by 'from beginning to end,' I don’t mean a linear, deterministic narrative but an account that is whole. Yet this is what Gilbert Achcar’s The People Want manages to do. This is the first book to locate the Arab uprisings within a broad historical sweep. . . . What this book does, in essence, is extend an invitation to the reader to leave a hall of mirrors that often guides explanations of the uprisings of the Arab world. Once we accompany Gilbert out of and away from the freak show that is mainstream scholarship about the Middle East, historical events and conceptual constructs start to take a completely different shape."—Maha Abdelrahman Jadaliyya

"While some readers may be distracted by Achcar’s unabashedly Marxist analysis, the strength and long-range view of his socio-economic insights should overcome such reluctance. … His insights offer a reasoned practical hope, whereas other analysts on the left offer doom and gloom. Moreover, Achcar’s chapter providing a “balance sheet” of what has been achieved so far in Tunisia, Egypt, Bahrain, Yemen, Libya and Syria, as well as an assessment of future prospects in each country, is indispensable."—Andrew Stimson Washington Report on Middle East Affairs

"It is easy to follow the events of the Arab Spring as it continues to unfold and get excited by some developments only to have the enthusiasm dashed by new twists and turns. While it is important to not gloss over troubling data, Achcar is correct to insist that we are still in the early stages and many different roads are still open. What he says about Libya is true for the entire region: 'The game is not over yet.'"—New Politics

"Publishing a book about the Arab uprising may seem a perilous venture given how swiftly events are changing. However, Gilbert Achcar, professor at the School of Oriental and African Studies, University of London, avoids the risk of being outdated by zooming in on root causes and abiding trends. . . . The book offers a valuable, in-depth and original perspective for evaluating the popular revolts which continue to determine events in the Arab region."—Sally Bland Jordan Times

"Gilbert Achcar, the preeminent Marxist scholar of the Arab world . . . attempts to get beneath surface impressions, especially those based on changing seasons. . . . Departing from the 'game of nations' framework that is used by most commentators on MENA as a way of reducing everything to a battle between the US and an 'anti-imperialist' bloc led by Vladimir Putin, Achcar’s analysis is grounded in the class relations that exist within nations like Egypt, Libya, Syria et al."—Louis Proyect CounterPunch

"Before this book that have been no adequate analyses of the political economy of the Arab uprisings . . . this is a great book, a must-read for all who seek a deep understanding of the root causes and the social and economic conditions that are shaping the dynamics of the Arab uprisings."—Atef Said Solidarity

"Achcar's book offers a refreshingly insightful analysis . . . a great book, a must-read for all who seek a deep understanding of the root causes and the social and economic conditions that are shaping the dynamics of the Arab uprisings."—Atef Said Against the Current

"A detailed and searching account of the Arab Spring."—Malise Ruthven New York Review of Books

"The most careful, insightful, and erudite study to date of the Arab uprising."—Kevin B Anderson Marx and Philosophy

"Gilbert Achcar’s The People Want: A Radical Exploration of the Arab Uprising provides not only a definitive and comprehensive overview of the uprisings but also, and more importantly, identifies the socio-economic dynamics that led to their eruption. While the first two chapters, which examine the dimensions of the socio-economic predicament, constitute the book’s primary contribution, the importance of the following chapters—in which he presents an in-depth analysis of the uprisings, focusing on internal and regional factors, the sequence of the main events, and Western policy—should not be underestimated."—Yusri Hazran Bustan: The Middle East Book Review

2. The Peculiar Modalities of Capitalism in the Arab Region
The Problem of Investment
Public and Private Investment
A Specific Variant of the Capitalist Mode of Production
1. Rentier and Patrimonial States
2. A Politically Determined Capitalism: Nepotism and Risk
The Genesis of the Specific Regional Variant of Capitalism: An Overview

4. Actors and Parameters of the Revolution
Overdetermination and Subjective Conditions
The Workers’ Movement and Social Struggles
New Actors and New Information and Communications Technologies
States and Revolutions

Gilbert Achcar, author of The People Want, gives a lecture on the past and future of the Arab Uprising at the DU Center for Middle East Studies.