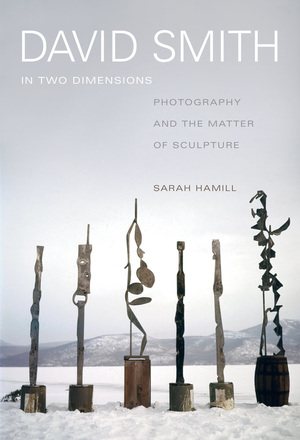 David Smith in Two Dimensions Photography and the Matter of Sculpture

Toward Mass Reproduction as a Public Display

Yet the frantic abolition of all distances brings no nearness; for nearness does not consist in shortness of distance. What is least remote from us in point of distance, by virtue of its picture on film or its sound on the radio, can remain far from us.

The year is 1946. David Smith has received two of his largest exhibitions to date, a pair of shows that earned him wide praise and helped to secure his reputation as "the best young sculptor in the country," as Clement Greenberg then lionized him in The Nation. Each exhibition included what the New Yorker critic Robert Coates called in a review Smith's "frenzied" postwar production, and each assumed a different audience using two distinct modes of display. The exhibitions reflected back to Smith two models of what sculpture's public address could be: one was spatial and material, inciting an experience of steel sculpture in the round, while the other was photographic, in which his works' pictorial qualities were amplified and dramatized in two dimensions.

In New York, the exhibition encompassed two Fifty-Seventh Street galleries-Smith's own, the Willard, and the neighboring Buchholz-to present fifty-four sculptures, along with drawings, in a way that invited critics to track Smith's career. Coates noted a "slump" during the war and a frenetic pace afterward, as the artist produced twenty sculptures in a frenzy he attributed to a "wartime obsession . . . still working its way to the surface." Greenberg observed a similar explosion of subject matter in Smith's postwar productions, although he was less impressed, noting that Smith's "phase of extravagance, disorder, and agitation is something he seems compelled to work his way through" linking the artist's "baroque vein" to "late history."

In an essay he wrote for the exhibition catalog, W. R. Valentiner hoped to couch those "wartime obsession[s]" in formal analysis. He explained how Smith manipulated two-dimensional images to achieve a three-dimensional encounter: "By walking around these sculptures, which are intended to be seen from all sides, the masses appear to be constantly shifting, revealing new views of exploding energy, of which parts seem to break through the frame unexpectedly, as if darting into space." Valentiner presented Smith's imagery of violence and war by evoking spatial instability and broken, bursting frames-a language aimed at a pub

How does photography shape the way we see sculpture? In David Smith in Two Dimensions, Sarah Hamill broaches this question through an in-depth consideration of the photography of American sculptor David Smith (1906–1965). Smith was a modernist known for radically shifting the terms of sculpture, a medium traditionally defined by casting, modeling, and carving. He was the first to use industrial welding as a sustained technique for large-scale sculpture, influencing a generation of minimalists to come. What is less known about Smith is his use of the camera to document his own sculptures as well as everyday objects, spaces, and bodies. His photographs of his sculptures were published in countless exhibition catalogs, journals, and newspapers, often as anonymous illustrations. Far from being neutral images, these photographs direct a pictorial encounter with spatial form and structure the public display of his work.

“Art has its tradition, but it is a visual heritage. The artist’s language is the memory from sight. Art is made from dreams, and visions, and things not known, and least of …

Sarah Hamill is Assistant Professor of Modern and Contemporary Art at Oberlin College.

"Does more than reveal the important role photography played in Smith's art; it fundamentally alters how we see the works he photographed."—Bookforum

"Sarah Hamill's David Smith in Two Dimensions makes a decisive contribution to our understanding of one of the greatest modern sculptors by focusing attention—to all intents and purposes, for the first time—on the surprisingly important role of photography in his practice and thinking. All future students of Smith's art will be in her debt."—Michael Fried, Johns Hopkins University

"This unusually intelligent and illuminating analysis of David Smith’s photographs significantly redefines our understanding of the artist’s sculptural oeuvre. It is not just about the relation between his photography and his sculpture. Rather, it demonstrates in a way that no previous study has done how Smith’s often-experimental photographic imaging was integral to his sculptural practice."—Alexander Potts, University of Michigan

"Hamill’s exploration of the vital significance of photography to David Smith’s sculpture will alter the understanding of this great artist’s work. She shows the purposefulness with which he photographed his sculpture and how his photography amplified his dialogues with other influential modernists, such as Rosso, Brancusi, and Moore. Her analysis of Smith’s color photographs leads to a welcome revision of the language around his paint on steel. This astute and probing study reveals an artist of staggering intentionality and invention."—Michael Brenson, Bard College

Acknowledgments
Introduction: The Problem of Photography and Sculpture
1. Toward Mass Reproduction as a Public Display
2. Aerial Vision, Photographic Abstraction, and the Surface of Sculpture
3. Images of Nonbelonging: Dramatizing Autonomy in the Sculptural Group
4. Picturing Color in Space
5. The Terrain of the Vulgar: Smith’s 1963–64 Nudes
Conclusion: Framed and Unframed Space
Notes
Bibliography
List of Illustrations
Index