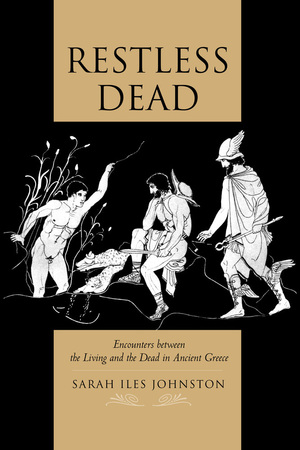 During the archaic and classical periods, Greek ideas about the dead evolved in response to changing social and cultural conditions—most notably changes associated with the development of the polis, such as funerary legislation, and changes due to increased contacts with cultures of the ancient Near East. In Restless Dead, Sarah Iles Johnston presents and interprets these changes, using them to build a complex picture of the way in which the society of the dead reflected that of the living, expressing and defusing its tensions, reiterating its values and eventually becoming a source of significant power for those who knew how to control it. She draws on both well-known sources, such as Athenian tragedies, and newer texts, such as the Derveni Papyrus and a recently published lex sacra from Selinous.

Topics of focus include the origin of the goes (the ritual practitioner who made interaction with the dead his specialty), the threat to the living presented by the ghosts of those who died dishonorably or prematurely, the development of Hecate into a mistress of ghosts and its connection to female rites of transition, and the complex nature of the Erinyes. Restless Dead culminates with a new reading of Aeschylus' Oresteia that emphasizes how Athenian myth and cult manipulated ideas about the dead to serve political and social ends.

Sarah Iles Johnston is Associate Professor of Greek and Latin at Ohio State University. She is author of Hekate Soteira: A Study of Hekate's Roles in the Chaldean Oracles and Related Literature (1990) and coeditor of Medea: Essays on Medea in Myth, Literature, Philosophy and Art (1997).

"[This work] will represent the principal study of ancient Greek beliefs in the intervention of the dead, a topic of acute relevance to the study of classical literature, Greek religion, and the later cultures that spawned curse tablets and versions of Christianity."—David Frankfurter, author of Religion in Roman Egypt

"This is an incontestably useful book. . . . The author's scholarship is remarkable and her competence indisputable. Her laudably courageous and original analysis of the Erinyes leads us from archaic poetry, via the purificatory rituals and reforms of cult brought about by the mysterious Epimenides, to the Orphic tradition recently discovered in the Derveni papyrus—all of which enables Sarah Johnston to conclude by proposing an enthralling rereading of Aeschylus' Oresteia."—Philippe Borgeaud, author of The Cult of Pan in Ancient Greece