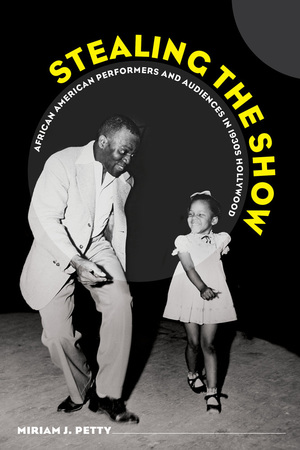 Stealing the Show is a study of African American actors in Hollywood during the 1930s, a decade that saw the consolidation of stardom as a potent cultural and industrial force. Petty focuses on five performers whose Hollywood film careers flourished during this period—Louise Beavers, Fredi Washington, Lincoln “Stepin Fetchit” Perry, Bill “Bojangles” Robinson, and Hattie McDaniel—to reveal the “problematic stardom” and the enduring, interdependent patterns of performance and spectatorship for performers and audiences of color. She maps how these actors—though regularly cast in stereotyped and marginalized roles—employed various strategies of cinematic and extracinematic performance to negotiate their complex positions in Hollywood and to ultimately “steal the show.” Drawing on a variety of source materials, Petty explores these stars’ reception among Black audiences and theorizes African American viewership in the early twentieth century. Her book is an important and welcome contribution to the literature on the movies.

We’re delighted to announce that multiple UC Press titles have been recognized at this year’s Kraszna-Krausz Foundation Book Awards! Celebrating excellence in photography and moving image publishing, the KKF Awards are the UK’s …

Miriam J. Petty is Associate Professor and Screen Cultures Director of Graduate Studies in the Department of Film, Radio, and Television at Northwestern University.

"[Miriam Petty's] ambitious book places Stepin’ Fetchit (the persona of Lincoln Perry) in a new light, and all of her subjects in high relief. . . . [A] fine book."—Film Quarterly

"Miriam J. Petty complicates narratives of cinematic stardom and visibility in the Jim Crow era by examining the on- and off-screen performances of five African American actors. By studying the relationship among these performers, their audiences, the black and white presses, and Hollywood studios, Petty illustrates how their celebrity can be understood as a problematic one, in which Hollywood was able to maintain an air of white benevolence while it and the mainstream press worked to perpetuate racist ideology. Providing a counterbalance to this narrative is that the black press’s coverage of performances by the five actors—Hattie McDaniel, Bill Robinson, Louise Beavers, Fredi Washington, and Lincoln Perry—served as a means for critique and discussion among the African American community. The work adeptly links these dynamics together through the phrase “stealing the show,” a term used by both mainstream and black presses to describe the impressive performances of these actors."—Studies in American Humor

"Stealing the Show’s pedagogical possibilities and pairings are as exciting as they are refreshing. This book should be used in American cinema classes broadly and should serve as a requisite text for African American cinema classes. . . . There is so much that this excellent book says about Black stars and audiences today in what Kristen J. Warner calls the 'time of plastic representation' in Hollywood. Stealing the Show should inspire cinema and media scholars to expand on this stunning contribution to the field by looking back at the roles of other 'picture stealers' in the studio era and thinking forward to their modern-day counterparts."—Journal for Cinema and Media Studies

"A corrective to simplistic, broadly drawn readings of 1930s Black performers, Stealing the Show deftly balances nuanced readings of Black stereotypes, cinematic moments, extracinematic dynamics and discourses, and self-fashioning and spectatorial politics. In doing so, Petty demonstrates the substantial and, often, subversive ways that “Black entertainers and audiences expressed agency and negotiated ideas about their lives and identities through acts of performance and discourse that incorporated and exceeded the cinematic frame.” Focusing on widely known performers and performances, Petty pushes beyond a superficial reading of Black representation in the 1930s, encouraging a more thoughtful account of the import and impact of the roles these pioneering, beleaguered stars played."—Journal of Cinema and Music Studies

"In Stealing the Show [Petty] delivers a sophisticated, highly readable yet complex study of this period that illustrates the nuanced relationships between African American actors, their screen roles, and the audiences viewing them in theaters. . . . Petty's mastery of the scholarship, along with her archival research and her theoretical boldness make Stealing the Show an instant classic in the genre."—Journal of American History

“This major work of film and cultural studies scholarship brilliantly unpacks what is at stake in the common expression ‘stealing the show’ in the context of African American tradition and performance. The detailed analyses of performance—of how Hattie McDaniel acts, how Bill Robinson dances, how Lincoln Perry’s Stepin Fetchit speaks and moves—manage to be at once evocative and rigorous. These are worked together with contextual moves that are at once surprising and yet, once made, made one wonder why they had not been pressed home before: McDaniel in relation to iconic earlier African American women activists, for instance; discourses and technologies of skin color in relation to the use of star images in Imitation of Life; children as spectators within and beyond the films of Bill Robinson. Beautifully written, Stealing the Show has found a way to analyze in detail and with precision the common perception of the remarkable achievements of African American performers in the face of the roles they were obliged to play, on and off screen. In the process, Miriam Petty has produced an important, engaging, and exemplary work of textually and historically sensitive cultural analysis.”—Richard Dyer, King's College London and St. Andrews University

“Hattie McDaniel, ‘Bojangles’ Robinson, Fredi Washington, Louise Beavers, and ‘Stepin Fetchit,’ who shine in so many movies from the ’30s and early ’40s—are they best understood as toms, coons, mammies, mulattoes, and bucks, as in Donald Bogle’s resonate formulation? Or as stars, as the black press and African American moviegoers of the time often felt? Miriam Petty’s energetic and detailed analysis of these performers, their films, and the varying discourses around them (press, critical, PR, and fan) lays out and explores the stakes and limits that inhered—and still inhere—in these questions and debates. Stealing the Show makes clear why and how these performers were so galvanizing, and how the filmmaking and sociocultural representational systems that could only see them as thieves still needs reform.”—Arthur Knight, author of Disintegrating the Musical: Black Performance and American Musical Film

“Stealing the Show mines the complex position of African American performers in the Hollywood of the thirties from their treatment by studios and marketing departments to the ways in which they sought to control the construction of their own reputations both on and off the screen and within and outside of the Black community. Through extensive archival research and inviting prose, Miriam Petty seeks to understand the dynamics between star and audience, and the ways in which Black performers walked a delicate line between their onscreen roles and their off-screen personas. It provides an innovative look at Black stardom through the multifocal rubric of industry, performance, press, and audience and promises to change the way we think about how stardom reflects and refracts racial ideologies. There’s no doubt that Stealing the Show will be required reading for scholars of film history, star studies, and African American film.”—Paula Massood, Professor of Film Studies, Brooklyn College, CUNY