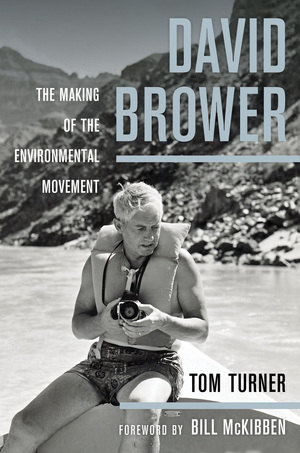 David Brower The Making of the Environmental Movement

In this first comprehensive authorized biography of David Brower, a dynamic leader in the environmental movement over the last half of the twentieth century, Tom Turner explores Brower's impact on the movement from its beginnings until his death in 2000.

Tom Turner began working with David Brower in 1968 and remained close to him until Brower’s death. As an insider, Turner creates an intimate portrait of Brower the man and the decisive role he played in the development of the environmental movement. Culling material from Brower’s diaries, notebooks, articles, books, and published interviews, and conducting his own interviews with many of Brower’s admirers, opponents, and colleagues, Turner brings to life one of the movement's most controversial and complex figures.

This post is written by Tom Turner, author of David Brower: The Making of an Environmental Movement The recent announcement that the Pacific Gas & Electric Company will close its Diablo Canyon …

Frequently compared to John Muir, David Brower was the first executive director of the Sierra Club, founded Friends of the Earth, and helped secure passage of the Wilderness Act, among other key achievements. Tapping …

Have You Hugged Your Planet Today?

On April 22, 1970, the inaugural Earth Day celebration helped galvanize the environmental movement in America and forged a new zeitgeist that put the health of the planet front and center …

"An exceptionally good biography. . . . a bold and satisfying portrayal of a complex man. If you thought John Muir was the only wildlife grandaddy in the Bay Area, Turner's book will set you straight, enjoyably. . . . Admirably, Turner gathers the octopus of Brower's interests into a cohesive bundle that offers readers an overview of the environmental movement and insight into one of its most intriguing, controversial characters."—Lou Fancher East Bay Monthly

"David Brower has slipped into semi-obscurity over the years, but he deserves a place in the pantheon of environmental heroes. . . . Turner brings Brower to life as a charismatic, intensely passionate man who could be as frustrating to his allies as to his adversaries. . . . Anyone who has had the honor of seeing the breathtaking stillness of the Grand Canyon can be thankful for Brower’s unreasonable evangelism."—REBECCA TUHUS-DUBROW Pacific Standard

"I cannot say enough positive about this book. True, Turner makes Brower the hero, but how could it be otherwise? His hero is not without faults, serious faults, but it is by looking at how the environmental movement overcame them that we learn how to keep the movement going."—David Brooks Alternatives Journal

“This is a brilliant, well-rounded biography of a Great American Hero. Never before has the full thrust of David Brower's life been so thoroughly examined.”
—Douglas Brinkley, Professor of History at Rice University and author of The Wilderness Warrior:Theodore Roosevelt and the Crusade for America

“David Brower’s standing as one of the twentieth century’s most significant environmentalists was never in doubt. What this much-needed biography does is place him among the century’s most fascinating characters—one of those rare leaders who could not only envision the future but also conjure it into reality.”
—Michael Brune, Executive Director, Sierra Club

“Tom Turner has written a compelling—and long overdue—biography about one of the earth’s true heroes.”
—Lester R. Brown, President of the Earth Policy Institute and author of The Great Transition: Shifting from Fossil Fuels to Solar and Wind Energy

“As Tom Turner’s book clearly and powerfully conveys, David Brower was a trailblazer. He left a few gashes and scars, but so much of the wilderness and its tall trees stand because of Brower’s own towering courage.”
—Randy Hayes, Founder, Rainforest Action Network and Executive Director, Foundation Earth

“David Brower was a friend and, more important, is a hero of mine. He was one of the greatest pioneering defenders of the environment—a Rachel Carson of wilderness and biodiversity. This lively and fascinating book tells his story beautifully and is long overdue.”
—Paul Ehrlich, author of The Population Bomb

“With great skill and narrative drive, Turner shows Brower’s crucial role in saving the natural world from dams, logging, mining, and a consumer economy.”
—Mark Harvey, author of Wilderness Forever: Howard Zahniser and the Path to the Wilderness Act

“As the father of the modern environmental movement and, more important, a friend of the earth, Brower pushed beyond whatever limit or obstacle presented itself. His vision and will catalyzed the evolution of environmental activism in United States and globally. His life is a testament to the fact that one person can truly make a difference.”
—Erich Pica, President, Friends of the Earth

Prologue: A Tense Meeting in the Mountains

PART ONE: CLIMBER
1 • From Berkeley to the Sierra: An Outdoorsman Is Born
2 • Yosemite
3 • Into the Sierra Club
4 • Love and War

PART TWO: CAMPAIGNER
5 • A Sierra Club Leader Emerges
6 • The Battle Against Dams in Dinosaur
7 • The Battle for Wilderness

PART THREE: VISIONARY
8 • Big Books for a Cause
9 • Growing Pains and Saving the Grand Canyon
10 • Uncivil War
11 • From Archdruid to Friend of the Earth
12 • Friends of the Earth Takes on the World
13 • A Resumption of Hostilities