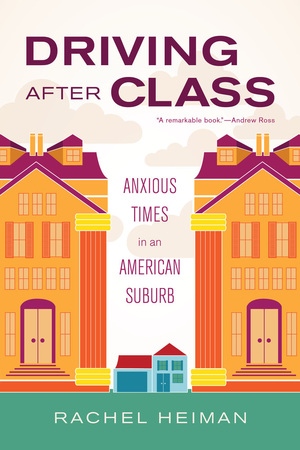 Driving after Class Anxious Times in an American Suburb

A paradoxical situation emerged at the turn of the twenty-first century: the dramatic upscaling of the suburban American dream even as the possibilities for achieving and maintaining it diminished. Having fled to the suburbs in search of affordable homes, open space, and better schools, city-raised parents found their modest homes eclipsed by McMansions, local schools and roads overburdened and underfunded, and their ability to keep up with the pressures of extravagant consumerism increasingly tenuous. How do class anxieties play out amid such disconcerting cultural, political, and economic changes? In this incisive ethnography set in a New Jersey suburb outside New York City, Rachel Heiman takes us into people’s homes; their community meetings, where they debate security gates and school redistricting; and even their cars, to offer an intimate view of the tensions and uncertainties of being middle class at that time.

With a gift for bringing to life the everyday workings of class in the lives of children, youth, and their parents, Heiman offers an illuminating look at the contemporary complexities of class rooted in racialized lives, hyperconsumption, and neoliberal citizenship. She argues convincingly that to understand our current economic situation we need to attend to the subtle but forceful formation of sensibilities, spaces, and habits that durably motivate people and shape their actions and outlooks. “Rugged entitlement” is Heiman’s name for the middle class’s sense of entitlement to a way of life that is increasingly untenable and that is accompanied by an anxious feeling that they must vigilantly pursue their own interests to maintain and further their class position. Driving after Class is a model of fine-grained ethnography that shows how families try to make sense of who they are and where they are going in a highly competitive and uncertain time.

Tools of the Trade: Anthropologists

As part of our “Tools of the Trade” blog series, we’re highlighting resources for social science scholars and educators to aid in your research, writing, and prep work this summer. Look no further for a refresher …

Rachel Heiman is Associate Professor of Anthropology at The New School.

“Rachel Heiman displays great talent for squeezing ingenious and often compelling meanings out of everyday events. This, of course, is precisely the stuff of anthropology, the study of the ordinary…. Heiman has done signal service by showing us how neoliberal sensibilities are inculcated and enacted in the banalities of daily life, an analysis that can give us clues about where to work for change.”—American Ethnologist

"There is much to like about this book. What Heiman does particularly well is write with compassion and respect while maintaining her critical voice... Heiman takes the worries of the people of Danboro seriously and shows us their world as they see it. The book is better for it."—American Journal of Sociology

“Historically informed and attentive to local specificity, Heiman’s book stands as a valuable exemplar of what native ethnography can look like and illustrates the value of turning the anthropological lens on a population often regarded as normative or against which others are created.”—North American Dialogue

"What Heiman does particularly well is write with compassion and respect while maintaining her critical voice."—American Journal of Sociology

"What gives this ethnography particular strength, is . . . the insight into the habitus of anxiety created by that race."—North American Dialogue

"One of the strengths of Driving after Class is Heiman’s development of the vivid term ‘‘rugged entitlement.’’ In many ways, rugged entitlement is the classed extension of the ‘‘American spirit,’’ a structure of feeling that is pervasive in middle-class suburbs like Danboro."—Contemporary Sociology

"Clearly written and argued, this ethnography explores what it was like to be a middle-class American in the 1990s."—Anthropologica

"Heiman adopts a unique approach: she seeks to unearth the middle-class subjectivities produced out of, and fueling, these competing trends."—American Sociological Association

"Heiman was in the right time and place to document the helter-skelter demise of the American suburban middle class. Her remarkable book captures the panic attached to a lifestyle that was held aloft only by the updraft of cheap credit, pre-peak oil, and the richly embroidered fantasies of capitalist growth." —Andrew Ross, author of Creditocracy and the Case for Debt Refusal and Bird on Fire: Lessons from the World's Least Sustainable City

"Beautifully written, exquisitely argued, at once bracing and sympathetic, Driving after Class tracks the trivial and reveals it to be anything but. In this nuanced ethnographic account of middle-class struggles over privilege and position, Heiman deftly draws out the symbolic meanings coiled in and driving everyday narratives and habits of desire around things such as vehicles, clothing, home décor, embodiment, and zoning. In so doing she exposes the striations of neoliberal capitalism that score middle class (in)securities of class position, anxieties about the future, and racialized fantasies of difference."—Cindi Katz, author of Growing Up Global: Economic Restructuring and Children's Everyday Lives

"Heiman combines an anthropologist’s insights and a novelist’s eye for detail to produce this unique ethnography of the world of the McMansions. From SUVs and gated driveways to zoning maps and school districts, she brilliantly analyzes the anxieties behind what she calls 'rugged entitlement,' the fragile claims to status and security in an upscale suburb."—Robert Fishman, author of Bourgeois Utopias: The Rise and Fall of Suburbia