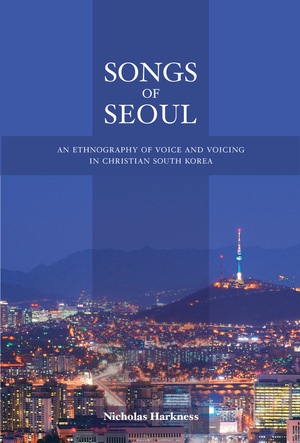 Songs of Seoul is an ethnographic study of voice in South Korea, where the performance of Western opera, art songs, and choral music is an overwhelmingly Evangelical Christian enterprise. Drawing on fieldwork in churches, concert halls, and schools of music, Harkness argues that the European-style classical voice has become a specifically Christian emblem of South Korean prosperity. By cultivating certain qualities of voice and suppressing others, Korean Christians strive to personally embody the social transformations promised by their religion: from superstition to enlightenment; from dictatorship to democracy; from sickness to health; from poverty to wealth; from dirtiness to cleanliness; from sadness to joy; from suffering to grace. Tackling the problematic of voice in anthropology and across a number of disciplines, Songs of Seoul develops an innovative semiotic approach to connecting the materiality of body and sound, the social life of speech and song, and the cultural voicing of perspective and personhood.

Nicholas Harkness is Assistant Professor of Anthropology at Harvard University.

"Body and soul may be the familiar title of an old tune, but Nicholas Harkness gives these words new meaning by showing how the Christian singing voice can bind them together. The result is a subtle and highly original approach to sound, materiality, religious faith, and the experience of modernity. With its integrated portrayal of Korean Society, this book demonstrates the analytical power of contemporary semiotics."—Webb Keane, George Herbert Mead Collegiate Professor of Anthropology, University of Michigan

"The fortunate readers of Songs of Seoul will hear South Korea as never before. Harkness teaches us how to listen to South Korean singing and speech for what they tell us about the meanings of being Christian in South Korea, and more broadly, about South Koreans' widespread identification with national progress. With great skill, Harkness guides us to church choirs, classrooms, and concert halls and into the mechanics of the human voice itself. Songs of Seoul convinces that the voice does indeed speak to the nature and feeling of contemporary South Korean social Life."—Nancy Abelmann, Harry E. Preble Professor, University of Illinois at Urbana-Champaign

"Songs of Seoul is an ear-opening, engaging, and deeply resonant exploration of the social life of voice in Korea. This is a path-breaking work, considering tone, timbre, and training as both key elements of and interpretive openings into a rich and thought-provoking account of history, society, and culture within South Korea and well beyond. A rich read for itself, this is also an invaluable invitation to take sound seriously."—Don Brenneis, University of California, Santa Cruz

"Songs of Seoul stands out as a pioneering work that attends to the anatomical level of voice production and its linkage with the phenomenological level of voice production. A truly ground breaking work on the semiotics of the human voice and vocal music in South Korean Christian culture."
Miyako Inoue, author of Vicarious Language: Gender and Linguistic Modernity in Japan

PART ONE. THE QUALITIES OF VOICE
1. Transformations of Voice
2. Voicing an Advanced Korea
3. Cultivating the Christian Voice
4. The Clean Voice

PART TWO. THE SOCIALITY OF VOICE
5. Tuning the Voice
6. The Voice of Homecoming
7. Feeling the Voice