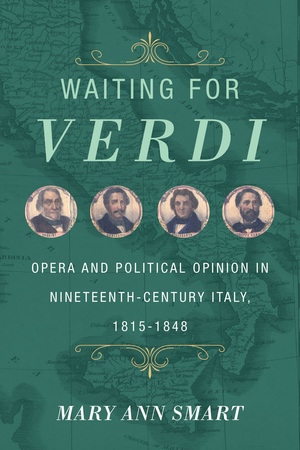 Waiting for Verdi Opera and Political Opinion in Nineteenth-Century Italy, 1815-1848

The name Giuseppe Verdi conjures images of Italians singing opera in the streets and bursting into song at political protests or when facing the firing squad. While many of the accompanying stories were exaggerated, or even invented, by later generations, Verdi's operas—along with those by Rossini, Donizetti, and Mercadante—did inspire Italians to imagine Italy as an independent and unified nation. Capturing what it was like to attend the opera or to join in the music at an aristocratic salon, Waiting for Verdi shows that the moral dilemmas, emotional reactions, and journalistic polemics sparked by these performances set new horizons for what Italians could think, feel, say, and write. Among the lessons taught by this music were that rules enforced by artistic tradition could be broken, that opera could jolt spectators into intense feeling even as it educated them, and that Italy could be in the vanguard of stylistic and technical innovation rather than clinging to the glories of centuries past. More practically, theatrical performances showed audiences that political change really was possible, making the newly engaged spectator in the opera house into an actor on the political stage.

This guest post is published as part of our blog series related to the American Musicological Society conference from November 1–4 in San Antonio.  By Mary Ann Smart, author of Waiting for Verdi: Opera and Political …

In celebration of Classical Music Month, we are pleased to present the below reading list highlighting some of our recent and forthcoming titles of interest.  To save 30% now—including backorders on not …

Mary Ann Smart is Gladyce Arata Terrill Professor in the Department of Music at the University of California, Berkeley. She is author of Mimomania: Music and Gesture in Nineteenth-Century Opera and editor of Siren Songs: Representations of Gender and Sexuality in Opera.

"The author reminds us of the dynamism that can reside in bel canto forms and their minute variations. Readers who experience musical passages with Smart as guide are likely to gain fresh perspective on Italian opera of this period and, more generally, on the art of close listening."—Opera News

"Waiting for Verdi offers a multifaceted reading of a wide array of source material. It transcends its musicological focus and offers detailed information for cultural historians dealing with Risorgimento culture."—European History Quarterly

"Smart’s examples problematize the relationship between art and politics. They are carefully chosen and the work is strengthened by the author’s willingness to go beyond opera and delve into other cultural debates and artistic endeavors."—American Historical Review

"A rich and stimulating work, exploring Italian music, mainly operas by Rossini, Donizetti, Bellini, and Verdi, performed in Naples, Milan, and Paris within the political and cultural contexts of Restoration Italy."—Journal of Modern History

"By meticulously analysing how Verdi structured his operas via employing canto forms and a wide range of innovative variations to achieve result oriented performances, Mary Ann Smart leads the attentive listener down a rabbit hole on a journey that assists in both illuminating facets and gaining fresh and stimulating perspectives on Italian opera and music at large."

"In Waiting for Verdi, Mary Ann Smart explores the long-debated topic of Italian opera and the Risorgimento, with an entirely new level of sophistication and imagination. She takes us on an exciting journey, inviting us to discover new works and figures and—most importantly—to hear afresh music we thought we knew inside out. Her book is an object lesson on how to think about the relationship between music, theater, and human beings. It is also a wonderful gift to Italy, one for which Italians and those who care about Italian art and history should be profoundly grateful."—Emanuele Senici, University of Rome La Sapienza

"In this richly tapestried work of Italian opera historiography, Smart weaves an elegant and nuanced account of how opera participated, albeit in improbable, uneven, and partial ways, in the making of Italy from 1816 to the period leading up to the revolutions of 1848. The old text-and-context approach, which would enchain aesthetic objects to cultural phenomena, is laid to rest here, no longer called on to do this work, nor is this history built on heroic old myths of Verdi as an engine of political change. Instead, Smart offers imaginative new archives of historical listening (in Italian opera houses, Parisian salons, and journalistic discourse) to show how active and sympathetic modes of attention operated in Italian spaces of operatic activity and to rethink the political in opera."—Martha Feldman, Mabel Greene Myers Professor of Music and author of Opera and Sovereignty: Transforming Myths in Eighteenth-Century Italy

"This is a book we have been waiting for: a multifaceted study that goes beyond appearances by scrutinizing the changes in perception of Italian opera before 1840. Smart proposes a way out of the impasse left by rather sterile debates about Verdi and Risorgimento: a striking analysis of the entanglement, hidden and obvious, of Romanticism and political meaning that affected Italian music theater in stormy times."—Anselm Gerhard, author of The Urbanization of Opera

"Mary Ann Smart’s new book reflects on decades of controversial debate among opera scholars and historians over the role of music in shaping Italians’ experiences during the Risorgimento. Instead of reading meaning into libretti, Smart’s research exemplifies a careful mode of cultural analysis based on the critical study of a broad range of sources and contexts, which are marked by intense interaction with ideas and aesthetic principles from all over Europe. Smart shows how music and opera were experienced and understood and explains that for most commentators opera wasn’t all about the peninsula's political fate."—Axel Körner, Department of History at University College London 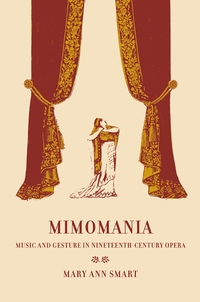