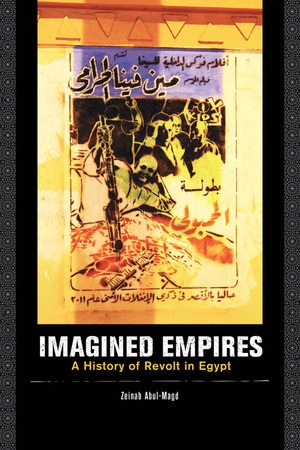 Imagined Empires A History of Revolt in Egypt

In 1785, the Ottoman sultan received a report on the state of affairs in Egypt that revealed unpleasant news. Egypt, one of the shiniest jewels in the empire's crown, was not one intact province under the sultan's full hegemony. The eminent officer who compiled the report described the existence of an autonomous state in the south. Seemingly enjoying no access to this state, the Ottoman officer gave brief and incomplete information about its government. According to the report, the autonomous regime in Upper Egypt was ruled by its own Arab tribal regime that did pay an annual tax to the sultan, but Cairo's Ottoman governor exercised no authority over it. About one of its legendary leaders, the report stated,

The Arab named Shaykh Hammam is resident in ... the province of Upper Egypt. He always has in his side four thousand Arab troops, and he controls by right of inheritance most of the villages of Upper Egypt. They [Hammam and his sons] never come to Cairo.... They always pay in full all the money and grains required for the treasury from their village, and they never oppose the tax collection. They themselves appoint and send twenty governors annually to the towns and provinces under their authority, and they collect approximately several thousand pur

Through a microhistory of a small province in Upper Egypt, this book investigates the history of five world empires that assumed hegemony in Qina province over the last five centuries. Imagined Empires charts modes of subaltern rebellion against the destructive policies of colonial intruders and collaborating local elites in the south of Egypt.

Abul-Magd vividly narrates stories of sabotage, banditry, flight, and massive uprisings of peasants and laborers, to challenge myths of imperial competence. The book depicts forms of subaltern discontent against “imagined empires” that failed in achieving their professed goals and brought about environmental crises to Qina province. As the book deconstructs myths about early modern and modern world hegemons, it reveals that imperial modernity and its market economy altered existing systems of landownership, irrigation, and trade— leading to such destructive occurrences as the plague and cholera epidemics.

The book also deconstructs myths in Egyptian historiography, highlighting the problems of a Cairo-centered idea of the Egyptian nation-state. The book covers the Ottoman, French, Muhammad Ali’s, and the British informal and formal empires. It alludes to the U.S. and its failed market economy in Upper Egypt, which partially resulted in Qina’s participation in the 2011 revolution. Imagined Empires is a timely addition to Middle Eastern and world history.

Zeinab Abul-Magd is Assistant Professor of History at Oberlin College.

“Abul-Magd's study of Qina province, a "small" place, provides large and crucial insights into the workings of imperial modernity - its reach, its images, and its wake of destruction. She weaves a fascinating story of both empire and the local and quotidian of Upper Egypt, revealing how grassroots resistance shaped the imperial course over several centuries. Her pioneering use of a trove of materials from Qina allows us to hear strong voices, making this a history not just of empire, but also of previously-silenced subalterns. Abul-Magd succeeds brilliantly in her aim of decentering and debunking many of the myths of Empire.” —Judith E. Tucker, Professor of History, Georgetown University

"[Imagined Empires] is a new and important contribution to our understanding of local resistance to foreign rule that does not take the nation-state as its unit of analysis. [Zeinab Abul-Magd] skillfully documents the continuing resistance of Upper Egyptian peasants and later workers against the oppressive policies of foreign-based rulers as well as against local rulers allied with outside powers over a period of five centuries. [Abul-Magd] succeeds in her historical linking of rebellions, uprisings, revolts, flight, armed attacks, sabotage, etc., against the ruling power of the day by disempowered Upper Egyptians, enriching our understanding of local dynamics and the transformative effects foreign rule has had on Upper Egypt over the period studied."—Joseph Massad, author of Desiring Arabs


“This is an important, original work. It has a conceptual approach for interpreting Egyptian history not seen before, [and] a great deal of new archival material to back it up.”—Peter Gran, author of Rise of The Rich

"[Zeinab Abul-Magd] provides a much-needed contribution by challenging the prevailing historiography of Ottoman and modern Egypt. For those of us who work on Egyptian history, Dr. Abul-Magd’s work is of extreme importance in challenging the ‘narrative of the north.’ [Imagined Empires] is outstanding."—Mona Russell, author of Creating the New Egyptian Woman: Consumerism, Education, and National Identity, 1863-1922
Read More >