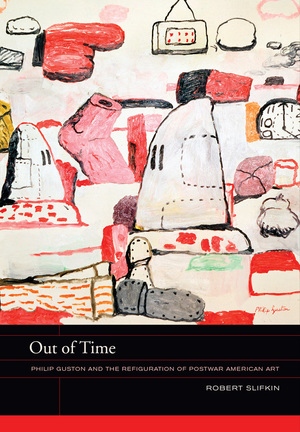 From the moment when it became plain in the late forties that the first significant American style had crystallized in Abstract Expressionism, a certain unhappy majority began to look forward to the day when its discomfort at the absence from art of references to external reality would be mollified by a return to figuration in painting and sculpture. For this group the abandonment of the human figure and its environment reflected a failure with respect to "humanism."

Where is the figure in the carpet? Or is it just ... carpet?

If there is one thing that Philip Guston is known for it is his "return to figuration." The figuration he was presumably returning to-exemplified by paintings such as The Studio (see plate 1), one of the thirty-three canvases he exhibited in October 1970 at the Marlborough Gallery in New York-was a style of painting apparently inspired by some of the artist's earliest works, images like The Conspirators (fig. 1), a drawing Guston made in 1930, when he was seventeen and living in Los Angeles, in which vigorously modeled members of the Ku Klux Klan were depicted in dreamlike surroundings. Guston's return in 1970 angered many of his admirers and baffled numerous critics. After creating some of the most subtle and unabashedly beautiful paintings associated with abstract expressionism, like Attar (see plate 2), and then, beginning about 1956, producing some of the most awkwardly sensitive and allusive, with bulbous forms in bold and clangorous colors emerging on canvases like The Evidence (see plate 3), Guston seemed to turn his back on all the movement stood for. In these new works he appeared to have traded the abstract expressionist rhetoric of existential angst and artistic integrity for a crude representational imagery based on what seemed to many people a simpleminded and outdated idea of political engagement rendered in an awkward, faux-naïf social realist style.

In most sympathetic accounts of Guston's work this return to figuration has been presented as a bold and audacious, even a courageous gesture. The standard narrative goes something like this: the artist, incited by the growing political and social crises of the decade and fed up with what he saw as the hermeticism and rigidity of the formalist paradigm of modern painting, creates a shockingly unorthodox body of work that critics initially scorn and misunderstand; over time, however, it begins to influence younger artists who emerged in the late 1970s and early 1980s-painters like Susan Rothenberg and Julian Schnabel. They would practice a new mode of figurative expressionist painting, and their success would sanction representational art after years of its widespread dismissal and validate the critical acceptance of Guston's own return to figuration.

Although these accounts succeed in placing Guston's Marlborough paintings in an ever-expanding art-historical canon, marking their origins in the figurative impulse of 1930s social realism and tracing their influence to the neo-expressionist figuration of the 1980s, they fail to situate Guston's figurative practice within the specific artistic and social conditions in which it emerged. In their emphasis on origins-both those of Guston's resurrected figurative imagery and those of a new generation of figurative painting-these accounts of the Marlborough paintings are more mythical than historical. Michael Auping has noted that "Guston's 1970 exhibition at the Marlborough Gallery in New York was one of those events that people tend to remember, especially if they weren't there. It had the immediate impact of a legend." By identifying the Ma

Focusing on the thirty-three paintings that Philip Guston exhibited at the Marlborough Gallery in 1970, this in-depth account reconsiders the history of postwar American art and the conception of figuration in modern art history. Through a myriad of cultural touchstones, including evidence from literary and musical vogues of the period, Robert Slifkin examines the role of history as both artistic medium and creative catalyst to Guston’s practice as a painter. Slifkin employs a wealth of visual examples, archival materials, and original scholarship to situate Guston’s paintings within broader artistic debates of the time, using the cultural movement of “the sixties” as its orienting foreground. This historical framework provides an interface between the notions of time in art and time in the material world. Lively and edifying, Slifkin’s comprehensive text productively complicates the prescribed traditions of postwar art history and, in turn, shifts our perception of Guston and his place in the domain of modern art.

"Slifkin is clearly smart and this first book promises a strong career."—David Kaufmann The Burlington Magazine

“Robert Slifkin deploys a glaring paradox—the fact that the standard art history of the 1960s largely ignores the unruly cultural phenomena that so vividly define the decade—to launch exactly the kind of book I've been hoping for. Out of Time is the work of a brave young scholar willing and able to change the terms by which a previous generation has framed the understanding of later twentieth-century art.”—Thomas Crow, author of The Rise of the Sixties: American and European Art in the Era of Dissent

"Slifkin proposes nothing less than a rethinking of art historical scholarship on the late 1960s. Elegantly wielding theoretical and literary terms, Slifkin points to the complex ways in which Guston’s paintings both acknowledge and mourn the demise of action painting and the ideals that sustained it. At the same time this dazzlingly rich analysis offers a revisionist and historical account of the cultural landscape of the late 1960s."—Cécile Whiting, author of Pop L.A.: Art and the City in the 1960s

"Out of Time moves Guston’s late paintings from the periphery to the center of art production around 1970 and saturates them with period culture—the culture of the art world, to be sure, but also that of music, films, fiction, and scholarship; of Bob Dylan’s Self Portrait, Bonnie and Clyde, The Book of Daniel, Armies of the Night, The Shape of Time. The expansive viewpoint and lively writing give us a new view of Guston as an artist very much of his time but still profoundly pertinent in the 21st century."—Michael Leja, author of Reframing Abstract Expressionism and Looking Askance

“[Out of Time is] the first major critical evaluation of Guston’s late work. Its contribution to the history of postwar American art is significant. Its style is both scholarly stimulating and enjoyable to read.”—Klaus Ottmann, Director of the Center for the Study of Modern Art and Curator at Large, The Phillips Collection