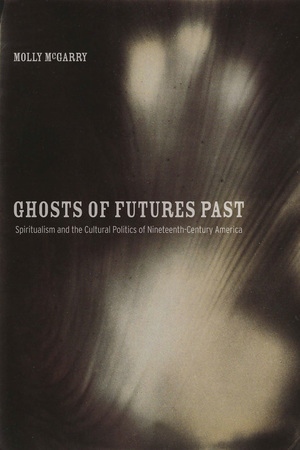 Ghosts of Futures Past guides readers through the uncanny world of nineteenth-century American spiritualism. More than an occult parlor game, this was a new religion, which channeled the voices of the dead, linked present with past, and conjured new worldly and otherworldly futures. Tracing the persistence of magic in an emergent culture of secularism, Molly McGarry brings a once marginalized practice to the center of American cultural history. Spiritualism provided an alchemical combination of science and magic that called into question the very categories of male and female, material and immaterial, self and other, living and dead. Dissolving the boundaries between them opened Spiritualist practitioners to other voices and, in turn, allowed them to imagine new social worlds and forge diverse political affinities.

Molly McGarry is Assistant Professor of History at the University of California, Riverside, coauthor of Becoming Visible: An Illustrated History of Lesbian and Gay Life in Twentieth-Century America, and coeditor of A Companion to LGBT/Q Studies.

“Ghosts of Futures Past offers a fresh and important perspective on significant issues in mid-nineteenth-century cultural history.”—The Journal Of American History

“Overall, this is a useful addition to both American historiography and the history of Spiritualism.”—Tom Ruffles Fortean Times: The Journal Of Strange Phenomena

“Ghosts of Futures Past is a path-breaking book of vast learning and scrupulous scholarship by a gifted writer. With an impressive command of a variety of cultural domains, Molly McGarry brilliantly rethinks and reframes the relations of gender and intellectual culture, of spiritualism and secularism, and of rationalization and modernity in ways that realign our understanding of the American cultural landscape in the nineteenth century.”—Thomas Bender, author of The Unfinished City: New York and the Metropolitan Idea

"In discussing the transfiguration of bodies and genders in American Spiritualism, McGarry provides a fascinating critique of the secularist bias of much of the history of sexuality. This is perhaps the weightiest, the most thoughtful, the most powerfully original, of all the many contributions her book makes."—Henry Abelove, author of The Evangelist of Desire: John Wesley and the Methodists and Deep Gossip


“What might American history of the nineteenth century look like if we were not in such a rush to declare religious faith supplanted by science? McGarry's book provides tantalizing answers, inviting us to consider a nineteenth-century America where Spiritualists persisted and where people had good reasons to mourn. She not only shows us the popularity and centrality of connecting the living to the dead, she argues convincingly that this spiritual practice shaped a whole host of other cultural narratives: gender, sexuality, medicine, race, and ethnicity.”—Kathi Kern, author of Mrs. Stanton's Bible
Read More >

1. Mourning, Media, and the Cultural Politics of Conjuring the Dead
2. Indian Guides: Haunted Subjects and the Politics of Vanishing
3. Spectral Sexualities: Free Love, Moral Panic, and the Making of U.S. Obscenity Law
4. Mediomania: The Spirit of Science in a Culture of Belief and Doubt
5. Secular Spirits: A Queer Genealogy of Untimely Sexualities