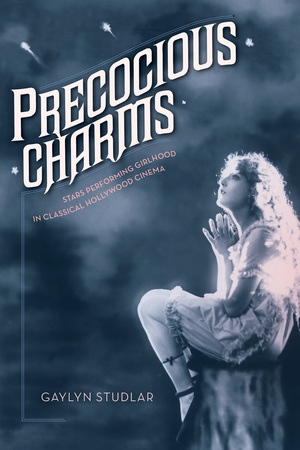 In Precocious Charms, Gaylyn Studlar examines how Hollywood presented female stars as young girls or girls on the verge of becoming women. Child stars are part of this study but so too are adult actresses who created motion picture masquerades of youthfulness. Studlar details how Mary Pickford, Shirley Temple, Deanna Durbin, Elizabeth Taylor, Jennifer Jones, and Audrey Hepburn performed girlhood in their films. She charts the multifaceted processes that linked their juvenated star personas to a wide variety of cultural influences, ranging from Victorian sentimental art to New Look fashion, from nineteenth-century children’s literature to post-World War II sexology, and from grand opera to 1930s radio comedy. By moving beyond the general category of “woman,” Precocious Charms leads to a new understanding of the complex pleasures Hollywood created for its audience during the half century when film stars were a major influence on America’s cultural imagination.

Gaylyn Studlar is David May Distinguished Professor in the Humanities at Washington University in St. Louis. She is the author of This Mad Masquerade: Stardom and Masculinity in the Jazz Age and In the Realm of Pleasure: Von Sternberg, Dietrich, and the Masochistic Aesthetic. She has co-edited four anthologies: John Ford Made Westerns, Visions of the East, Reflections in a Male Eye, John Huston and the American Experience, and Titanic: Anatomy of a Blockbuster.

"Lushly illustrated and compellingly written, this fascinating, timely book will easily suit both academic and general readers."—G. A. Foster Choice

“Studlar's work in Precocious Charms is especially remarkable considering the scope of film and femininity she has presented. Touching on questions of the youthful female, sexuality, pleasure and disavowal, the book is a fresh approach to studying the characteristics of these celebrated actresses and films.” —Lucy Fischer, Distinguished Professor of Film Studies and English, University of Pittsburgh

“Going far beyond the hackneyed ‘images of’ writing on movie stars we have seen so much of in the past, Gaylyn Studlar's Precocious Charms makes a major contribution to our understanding of how Hollywood works by enabling us to understand the complicated way in which stars function within culture.” —Virginia Wright Wexman, author of Creating The Couple: Love, Marriage, And Hollywood Performance

"Gaylyn Studlar’s study of young female actors is an eye-opening and provocative revisitation of stars that long have been revered by fans and analyzed by film scholars. Thanks to the close analyses of these films that have also marked her previous scholarship, Precocious Charms will be at home on the bookshelf of anyone interested in the vicissitudes of Hollywood’s performances of adolescence, gender, and sexuality." —Donald Crafton, Joseph and Elizabeth Robbie Professor of Film, Television, and Theatre, University of Notre Dame