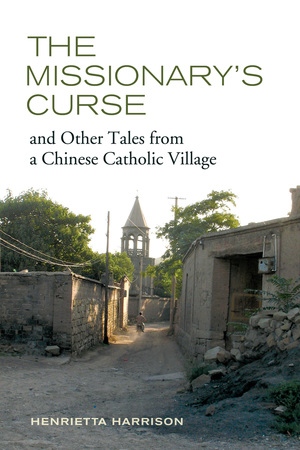 The Missionary’s Curse tells the story of a Chinese village that has been Catholic since the seventeenth century, drawing direct connections between its history, the globalizing church, and the nation. Harrison recounts the popular folk tales of merchants and peasants who once adopted Catholic rituals and teachings for their own purposes, only to find themselves in conflict with the orthodoxy of Franciscan missionaries arriving from Italy. The village’s long religious history, combined with the similarities between Chinese folk religion and Italian Catholicism, forces us to rethink the extreme violence committed in the area during the Boxer Uprising. The author also follows nineteenth century Chinese priests who campaigned against missionary control, up through the founding of the official church by the Communist Party in the 1950s. Harrison’s in-depth study provides a rare insight into villager experiences during the Socialist Education Movement and Cultural Revolution, as well as the growth of Christianity in China in recent years. She makes the compelling argument that Catholic practice in the village, rather than adopting Chinese forms in a gradual process of acculturation, has in fact become increasingly similar to those of Catholics in other parts of the world.

Henrietta Harrison is professor of modern Chinese studies at Oxford University. Among her books are The Man Awakened from Dreams: One Man’s Life in a North China Village, 1857-1942 and The Making of the Republican Citizen: Ceremonies and Symbols in China.

"[A] splendid book. . . . It's fascinating to see how Catholic Christianity became fully integrated into the life of [a Chinese] village."—Christian Century

"Harrison's deep familiarilty with China allows her to see connections between her specific narrative and the bigger thread of how China has been confronted with the outside world for the past two centuries. More than most other books I've read on China in recent years, it's one that rings true..."—Ian Johnson The New York Review of Books

"This outstanding study of Cave Gully Catholics is a breath of fresh air ... Meritoriously researched and easily accessible, The Missionary’s Curse should appeal to anyone interested in the intersection of faith and culture, religion and politics, and gender and patriarchy in China."—Joseph Tse-Hei Lee China Information

"There is no book on Chinese Christianity quite like this absorbing and thought-provoking study."—Ryan Dunch Harvard Journal of Asiatic Studies

“Through a brilliant analysis of Catholicism in one remote village, Harrison leads us to rethink much of the last three centuries of China’s history. Her series of beautifully written narratives challenges not just our usual understanding of Christianity’s reception, but the entire way we think about how local places fit into national and global networks of culture and trade.” —Robert P. Weller, co-author of Rethinking Pluralism: Ritual, Experience and Ambiguity


“This is one of the most fascinating books on Christianity in China that I have ever read. By following the history of one Catholic village over more than three hundred years, Henrietta Harrison convincingly shows how Chinese Christians sought authenticity as members of a transnational and global community.” —Nicolas Standaert, author of The Interweaving of Rituals

"Harrison has written an ethnographic history that will be a model for future researchers. She has linked archival research (in the Vatican's vast collections) with on-the-spot investigations of villages in north China. None of this work is easy, but the results are spectacularly successful. This is a must read for anyone interested in Chinese social history." —James L. Watson, Fairbank Professor of Chinese Society and Professor of Anthropology Emeritus, Harvard University