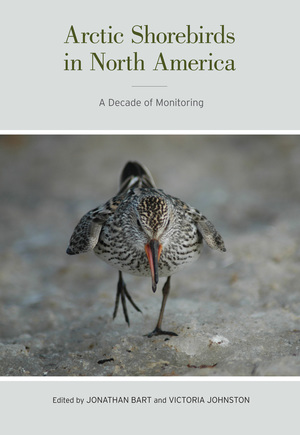 Arctic Shorebirds in North America A Decade of Monitoring

We report results from shorebird surveys in the North American Arctic, defined here as Bird Conservation Regions 2 and 3 of the North American Bird Conservation Initiative (http://www.nabci.net/International/English/bcrmap.html). The surveys estimate population size and trend, and provide information on habitat relationships, at the regional and Arctic-wide scale (Table 1.1, Fig. 1.1). Of the 53 species of shorebirds that breed in the United States and Canada, 26 (47%) breed in the arctic in sufficient numbers that arctic surveys are an important part of monitoring programs for them (Brown et al. 2001, Donaldson et al. 2000; Table 1.1).

Arctic-breeding shorebirds are a diverse group that exhibits a wide range of migration, reproductive, and wintering strategies (Table 1.1). Some species migrate a short distance to the northern United States and southern Canada (e.g. Purple Sandpiper; for scientific names, see Appendix C), while others undertake epic migrations to West Africa (e.g. Red Phalarope) or southern South America (e.g. Hudsonian Godwit, Red Knot). Some migrate in huge flocks, while others trickle south singly or in small groups. There are monogamous, polygamous, and polyandrous breeders, and most habitats in the Arctic provide nesting opportunities for shorebird species. Despite their different life history characteristics, all Arctic shorebird species share two traits: 1) they are all are migrants (none inhabit the Arctic year-round) and 2) because of their migratory behavior, all are exposed to anthropogenic hazards at some point(s) in their life cycle.

For more than a decade, concern has been expressed that shorebird populations around the world may be in serious decline. For example, a major review concluded that 48% of 200 populations with known trends were in decline, whereas only 16% were increasing (International Wader Study Group 2003). Since this review, further evidence has accumulated indicating broad declines among shorebird populations. Nebel et al. (2008) reported declines during the past 24 years of 81% for shorebirds breeding in Australia and 75% for shorebirds present there during migration. Many studies have shown that migration counts of shorebirds in eastern and central North America have declined, especially along the eastern seaboard (Bart et al. 2007, Morrison et all 2001b, Morrison and Hicklin 2001, Morrison et al. 1994, Howe et al. 1989). Niles et al. (2009, 2008) reported that rufa Red Knot populations have declined more than 75% and that populations of other species using the Delaware Bay may have declined. Numerous studies at Arctic breeding locations have also recorded declines in some species (Johnston and Pepper 2009, Smith 2009, Jehl 2007, McCaffery et al. 2006, Jehl and Lin 2001, Gratto-Trevor et al. 1998, Gratto-Trevor 1993).

Shorebirds are a difficult to monitor because few species are well-surveyed on their breeding grounds (due largely to access problems) and few migration or wintering regions of the world have rigorously-designed surveys. When the North American shorebird initiative was initiated in the late 1990s, few survey data were available to use in estimating trends (Brown et al. 2001, Morrison et al. 2001). These factors, combined with other concerns about impacts of climate change, toxic pollutants, and habitat loss throughout the range of Arctic-breeding shorebirds led American and Canadian shorebird biologists to create the Program for International and Regional Shorebird Monitoring (PRISM) in the late 1990s (Skagen et al. 2003). The goals of PRISM are to:

1. Estimate the size of breeding populations of shorebirds in North America,

PRISM members proposed an Arctic-wide program whose objectives were to produce estimates of population size and trend, along with information on habitat relationships, at regional and Arctic-wide scales (Table 1.1). Obtaining population estimates, rather than just indices, was the most difficult, yet important, aspect of the Arctic PRISM sampling design. Most index surveys have numerous sources of potential bias so it is difficult to know whether change in survey results indicates change in population size or might be due to change in detection ratios (Williams et al. 2005). Knowing population size may also help managers judge how quickly a declining trend will put a species in conservation danger.

When fully implemented, the Arctic PRISM program will have three "tiers": Tier 1 includes the Arctic-wide surveys to estimate population size and trends for each of the 26 focal species. The accuracy target for trend estimation adopted by the shorebird initiative, 80% power to detect a decline of 50% occurring in 20 years, will be adopted for Tier 1 surveys (accuracy targets for the estimates of population size have not been adopted by the shorebird initiative) (Skagen et al. 2003). Tier 2 includes long-term studies of demographic rates and other aspects of natural history at permanent sites widely spaced across the Arctic in Alaska and Canada. Tier 3 is a checklist program that includes annual collection of information of the distribution and abundance of shorebirds at sites visited throughout the Arctic. Taken together, these programs will provide (1) continuous, suggestive - though not conclusive - indications of population change (tier 3 checklists supplemented by counts outside the Arctic during migration and wintering periods), (2) highly accurate - though expensive - estimates of trend, to be undertaken every 20 years or more often if other, less conclusive, evidence suggests serious declines (Tier 1 surveys), and (3) investigations of causes of declines and how they might be reversed (Tier 2 surveys).

In this monograph we present results from the first 10 years of Arctic PRISM surveys. The monograph is organized in four parts. The Introduction includes this chapter and a detailed discussion of the methods including the sampling plan, field methods, and analysis (Bart et al., this volume, chapter 2). Methods are not described in later chapters unless they differed from the methods described in Bart et al., this volume, chapter 2.

Part Four, Synthesis, includes three chapters beginning with a detailed summary of the results presented in regional chapters, Bart and Smith, this volume, chapter 14. This chapter will be an appropriate starting point for readers wishing the "big picture". Bart et al, this volume, chapter 15 discusses priorities for the future including both methodology and regions to survey.

The final section of the monograph contains more detailed information including (Appendix A) an explanation of why the framers of Arctic PRISM did not believe that migration or wintering counts could achieve the PRISM accuracy target of 80% power to detect a 50% decline in 20 years. Extensive tables of estimates with measures of precision are provided in Appendix B. The entire data set has been posted on the Coordinated Bird Monitoring web site (http://cbmdms.dev4.fsr.com/Default.aspx) along with the comprehensive analytic program, DS (for double-sampling), prepared during the course of this study.

Arctic PRISM is one of the most ambitious monitoring projects ever undertaken for non-game species. It has involved dozens of principal investigators, hundreds of cooperators, and thousands of hours of field and analysis time. Controversies, particularly over the methods, have occurred (Arctic PRISM Peer Review Committee 2010) as is inevitable in large, novel programs. However, despite the difficulties, data have been collected throughout the Arctic in North America, and, as this volume goes to press, Canada has decided to complete the first round of Arctic PRISM surveys and shorebird specialists in Alaska are discussing plans to continue the surveys in western Alaska, perhaps in 2012. We are therefore hopeful that the entire North American arctic will be surveyed using the PRISM methods, after which another round of evaluation should be carried out.

Acknowledgments are included in each of the subsequent chapters. Here we wish to thank our agencies, the US Geological Survey and the Canadian Wildlife Service, for their support of this work during the past decade. Also, we pay tribute to early support from the US Fish and Wildlife Service, and especially to Kent Wohl and Brad Andres, for helping J. Bart and others develop the basic survey methods. When that work began, no one knew that within a few years a major shorebird monitoring initiative would begin and that, ten years later, the shorebird community would be able to produce this volume.

Each year shorebirds from North and South America migrate thousands of miles to spend the summer in the Arctic. There they feed in shoreline marshes and estuaries along some of the most productive and pristine coasts anywhere. With so much available food they are able to reproduce almost explosively; and as winter approaches, they retreat south along with their offspring, to return to the Arctic the following spring. This remarkable pattern of movement and activity has been the object of intensive study by an international team of ornithologists who have spent a decade counting, surveying, and observing these shorebirds. In this important synthetic work, they address multiple questions about these migratory bird populations. How many birds occupy Arctic ecosystems each summer? How long do visiting shorebirds linger before heading south? How fecund are these birds? Where exactly do they migrate and where exactly do they return? Are their populations growing or shrinking? The results of this study are crucial for better understanding how environmental policies will influence Arctic habitats as well as the far-ranging winter habitats used by migratory shorebirds.

Jonathan R. Bart is a Research Wildlife Biologist with the Forest and Rangeland Ecosystem Science Center of the USGS in Boise, ID.

Victoria Johnston is a former biologist, now Policy Analyst, for Environment Canada and is based in Yellowknife, Northwest Territories.

“This volume represents a major milestone for the monitoring of wader populations in the Western Hemisphere. . . . It will serve as a point of reference for those developing new monitoring initiatives in North American Arctic and elsewhere.”—Graham Austin Brit Trust Ornithology (Bto)

“This is a massive coordinated effort to gain a robust understanding of the population dynamics and trends of arctic nesting shorebirds. . . . Highly recommended.”—J. C. Kricher, Wheaton College (MA) Choice

"/i/Arctic Shorebirds in North America//i/ represents a study that is one of the remarkable achievements of wildlife fieldcraft, like those done by Aldo Leopold in the 1930s and by the Craighead Brothers in the 1960s. To conduct a study of this scientific caliber in the great expanse and harsh climate of the Arctic makes it one of the great wildlife investigations whose value will only grow with time."--Larry Niles, Conserve Wildlife Foundation of New Jersey

"It is most timely that Jonathan Bart and Victoria Johnston have gathered information on shorebirds that breed in the Arctic regions of North America. Data on these birds is generated at a wide range of locations by many different individuals and teams, and this book puts it into perspective. It is particularly valuable to have this treatise when so many shorebird species worldwide are in marked decline."--Clive Minton, Australasian Wader Studies Group


"When the PRISM program for pan-Arctic shorebird monitoring was introduced, everyone agreed with its laudable aims, but it seemed impractical. How could shorebird biologists with limited time and resources acquire robust data on the size and trend of shorebird populations across the American Arctic? Now, the credibility gap has been bridged. /i/Arctic Shorebirds in North America//i/ presents the rigorous, practical methods that will be the foundation of Arctic shorebird monitoring for years to come. I look forward to Arctic PRISM becoming the keystone of shorebird conservation in the Western Hemisphere."--Humphrey Sitters, editor of /i/Wader Study Group Bulletin//i/
Read More >

9. AERIAL SURVEYS: A WORTHWHILE ADD-ON TO PRISM SURVEYS, ESPECIALLY IN THE INTERIOR?
Kyle H. Elliott and Paul A. Smith

13. DESIGN OF FUTURE SURVEYS
Jonathan Bart and Paul A. Smith

A. OTHER METHODS FOR ESTIMATING TRENDS OF ARCTIC BIRDS
Jonathan Bart, Stephen Brown, R. I. Guy Morrison and Paul A. Smith

C. COMMON, SCIENTIFIC AND ABBREVIATED NAMES FOR SPECIES INCLUDED IN THE VOLUME 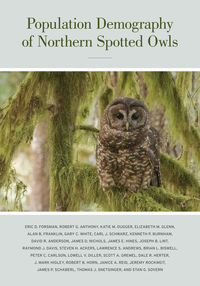 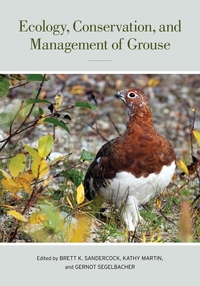 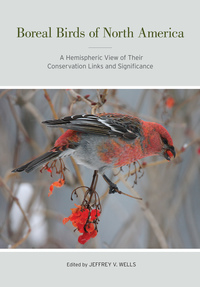 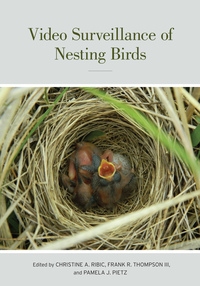 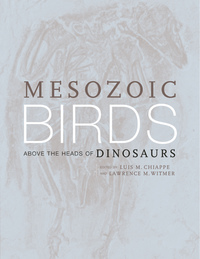 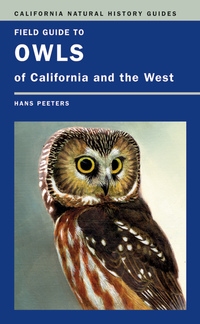