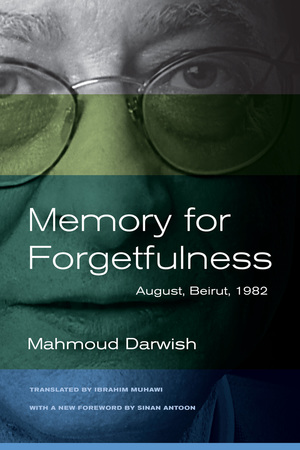 Memory for Forgetfulness August, Beirut, 1982, With a new Foreword by Sinan Antoon

One of the Arab world's greatest poets uses the 1982 Israeli invasion of Lebanon and the shelling of Beirut as the setting for this sequence of prose poems. Mahmoud Darwish vividly recreates the sights and sounds of a city under terrible siege. As fighter jets scream overhead, he explores the war-ravaged streets of Beirut on August 6th (Hiroshima Day).

Memory for Forgetfulness is an extended reflection on the invasion and its political and historical dimensions. It is also a journey into personal and collective memory. What is the meaning of exile? What is the role of the writer in time of war? What is the relationship of writing (memory) to history (forgetfulness)? In raising these questions, Darwish implicitly connects writing, homeland, meaning, and resistance in an ironic, condensed work that combines wit with rage.

Ibrahim Muhawi's translation beautifully renders Darwish's testament to the heroism of a people under siege, and to Palestinian creativity and continuity. Sinan Antoon’s foreword, written expressly for this edition, sets Darwish’s work in the context of changes in the Middle East in the past thirty years.

Mahmoud Darwish (1941-2008) was a Palestinian poet and writer, regarded as the Palestinian national poet. He published over thirty books of poetry during his life.

Ibrahim Muhawi is coauthor and translator of Speak Bird, Speak Again: Palestinian Arab Folktales (California, 1988) and Mahmoud Darwish’s Journal of an Ordinary Grief (Archipelago Books, 2010), for which he won the PEN Translation Prize.

Sinan Antoon is an Iraqi poet, novelist, translator, and scholar. He has published novels and verse in both Arabic and English, and is currently a professor at New York University.

""Extraordinary prose poems translated from Arabic, written out of the siege of Beirut."—The Guardian

"...a scathing, lyrical, darkly funny, electrifying memoir of his last terrible month in Beirut under Israeli siege. Darwish eschews the heroic mode and instead criticizes everyone, including the Palestinian resistance movement and its Arab allies, just as he exposes his own weaknesses."—New York Review of Books

"...masterfully translated . . . . The memoir shows us some of the reasons that Darwish is one of the foremost Arab poets . . . . with the tremendous immediacy and emotional power his text encodes, and his subtly drawn implicit arguments."

"The publication of Memory for Forgetfulness...is a welcome event for anyone interested in learning more about Arabic literature in general and Palestinian literature in particular. First issued in Arabic in 1986 under the title The Time: Beirut / The Place: August, the book is at once a personal memoir, a work of history, a prose poem, and a political essay--an all-inclusive and fragmented text that defies traditional generic expectations."

"...a classic of modern Arabic letters and one of the great war memoirs of the twentieth century. Published four years after the defeat in Lebanon, it is the culmination of Darwish’s first twenty years as a poet, a summing up of his views on literature and politics. . . . Darwish writes as an engaged intellectual, but also as a civilian. Most of the book is spent in quotidian activities: waiting for a taxi, quarreling in cafés, searching for a place to eat lunch. This street-level view allows Darwish to convey the singular helplessness of non-combatants caught up in modern “asymmetric” warfare."—Harper's Magazine