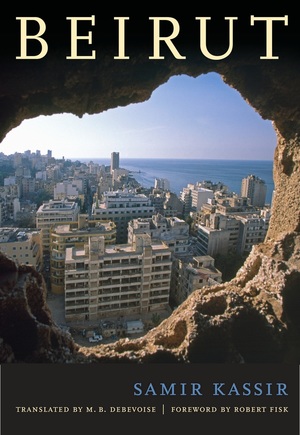 Widely praised as the definitive history of Beirut, this is the story of a city that has stood at the crossroads of Mediterranean civilization for more than four thousand years. The last major work completed by Samir Kassir before his tragic death in 2005, Beirut is a tour de force that takes the reader from the ancient to the modern world, offering a dazzling panorama of the city's Seleucid, Roman, Arab, Ottoman, and French incarnations. Kassir vividly describes Beirut's spectacular growth in the nineteenth and twentieth centuries, concentrating on its emergence after the Second World War as a cosmopolitan capital until its near destruction during the devastating Lebanese civil war of 1975-1990. Generously illustrated and eloquently written, Beirut illuminates contemporary issues of modernity and democracy while at the same time memorably recreating the atmosphere of one of the world's most picturesque, dynamic, and resilient cities.

The History and Politics of Lebanon: A Reading List

In light of the horrific explosion that took place on August 4th in Beirut, UC Press is providing a list of titles to help understand and contextualize the history of Lebanon and …

One of the leading voices for progressive change in the Middle East, Samir Kassir (1960-2005) taught at the Institut des Sciences Politiques of the Université Saint-Joseph in Beirut, worked as a journalist and editorial writer for the daily An-Nahar newspaper there, and was a co-founder of the Democratic Left Movement in Lebanon. The author of several other books, including Being Arab, Kassir was assassinated by a car bomb in Beirut in June 2005.

“Kassir embodied Beirut’s variant of the polyglot Levantine ideal. The child of a Palestinian father and a Syrian mother, he was nominally a Christian and technically a foreigner in Lebanon; but he was a genuine Beiruti of the city’s last golden age: an intellectual, writer, historian, journalist, Communist, radical, firebrand, sometime exponent of American policy, explorer of meaning and archaeologist of ideas. His biography of the city of which he was a vital constituent is unlikely to be surpassed.”—London Review of Books

“Beirut (in a fine translation by M.B. DeBevoise) is [Kassir’s] magnum opus, a unique contribution to the growing literature on modern and contemporary Lebanon. . . . Erudite, evocative, and highly compelling.”—Review of Middle East Studies

“A definitive history of the city.”—Middle East Journal

“Beirut is a demanding work teeming with detail. . . . This is a significant and important book for anyone with an interest in the city and its ongoing troubles, the Middle East in general and in the relationship between modernity and urbanity.”—The Australian

“An evocative portrait of a great but tragic metropolis.”—Booklist

"Samir Kassir's Beirut is a passionate tour de force, a love letter to that sparkling capital that takes us on a careening ride through its history. It's a tale that reads like a novel, peopled by missionaries and city-builders, warlords and intellectuals, diplomats and clan leaders. And all along, we know how it ends: in Beirut's implosion into the senseless violence and civil war from which, sadly, it has never fully recovered. Epic in scope, Kassir's masterwork shows us Beirut in all its richness, from its vibrant past to its uncertain, shaky future."—Robert Dreyfuss, author of Devil's Game: How the United States Helped Unleash Fundamentalist Islam


"Until the outbreak of the civil war in Lebanon in 1975, Beirut was the unparalleled queen of the Eastern Mediterranean. In this panoramic work Samir Kassir invites us into 'the cosmopolitan capital of the Arabs', navigated through unearthing Beirut's Ottoman, Mandate, and post-independence past. Kassir's exquisite cultural history combines an erudite scholarship of urban form with an intimate reading of the city's collective biography. A truly exceptional work."—Salim Tamari, author of Mountain Against the Sea: Essays on Palestinian Society and Culture

"Samir Kassir has given us a memorable history of Beirut. His tribute to the city he loved, and in which he was killed, is a testament of great fidelity and truth. A work that never falters, an exquisite narrative of a city that has known both joy and heartbreak. The definitive history of this city that has juggled and brokered competing identities."—Fouad Ajami, author of The Dream Palace of the Arabs

"This is a fine book, accessible and well written, which will appeal to specialist and general readers alike. It explains why Beirut has been a byword not only for spasmodic violence, but also for some of the most interesting and important developments in the Middle East over the past two centuries. Balanced, tempered and learned, this book reminds us of how great a loss resulted from Samir Kassir's untimely death."—Rashid Khalidi, author of Sowing Crisis: The Cold War and American Dominance in the Middle East

"Kassir was an unusual kind of martyr in today's Middle East, a staunch secularist who wanted to live in a free country, not to die for one. In a region driven increasingly by a politics of death and sacrifice, he stood for a vision of peaceful reform, progressive social change and democratic secularism—the values of any left worthy of the name."—Adam Shatz, in The Nation

Prologue: The Eyes of the Mind

Part One: From the Ancient to the Modern World

1. Beirut before Beirut
2. The Great Transformation
3. The Ibrahim Pasha Era
4. The Roads from Damascus
5. A Window on Ottoman Modernity

6. A Cultural Revolution
7. Between Boston and Rome
8. The Horizon of the World
9. Uncertain Identities

Part Three: The Capital of the Mandate

10. France Broadens Its Mission
11. The French City
12. Grand-Liban and Petit Paris
13. A Crucible for Independence

Part Four: The Cosmopolitan Metropolis of the Arabs

14. The Switzerland of the East
15. Beirut, Male and Female
16. The Pleasures of the World
17. Écochard’s Lost Wagers

Part Five: The City of Every Danger

Epilogue: To Be or To Have Been
Notes