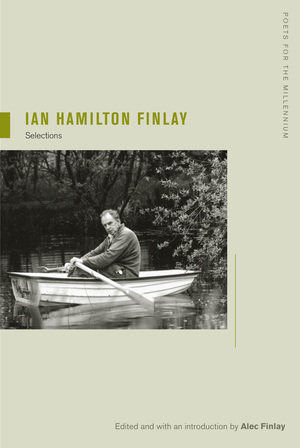 Ian Hamilton Finlay Selections, Edited and with an Introduction by Alec Finlay

This volume surveys the life and work of the Scottish poet Ian Hamilton Finlay, who is best known for his extraordinary garden, Little Sparta, a unique “poem of place” in which poetry, sculpture, and horticulture intersect. This book directs sustained attention to Finlay the verbal artist, revealing the full breadth and richness of his poetics. It illuminates the evolution from his early years of composing plays, stories, and lyrical poems to his discovery of Concrete poetry and his emergence as a key figure in the international avant-garde of the 1960s.

Ian Hamilton Finlay (1925-2006) was an acclaimed Scottish poet and artist. Alec Finlay is an artist and poet.

“Almost wherever Finlay leads us, in verse, prose, or garden, there is a pervasive wit and invention of great brilliance in evidence. . . . Finlay’s son Alec has edited together and introduced a hugely enjoyable anthology of Finlay’s writings, in prose, and truly beautiful—especially when surreal—verse. We should all be grateful to him.”—Andrew McNeillie Country Life

“Like many of his predecessors Finlay's road to the title was one of early poverty, dismissal of his work, and a life of struggle leading to late recognition. . . . Finlay was finally an artworld commodity and traded in his wellies for Dolce & Gabbana. His temples are mock-historic edifices, but who are we to say that they are not sacred sites?”—Booktryst

“This welcome new volume, Selections, ranging from Finlay’s first stories and plays to his final inscriptions and aphorisms, reminds us that most of his career consisted of unilateral declarations of independence, in a territory staked out by his own definitions and designs. It is full of revelations that cast new light on the subject—notably in the sixty-page introduction by Alec Finlay, the author’s son. His portrait of his father . . . manages to sound objective as well as affectionate. He clarifies the poet’s debts to international and avant-garde movements, but invites us to recognize the irreducible Scottishness of his character and inspiration.”—Gerald Mangan Times Literary Supplement (TLS)

"Scottish poet Ian Hmilton is one of the most influential artists of the late twentieth century... [Ian Hamilton Finlay: Selections] is an essential purchase for anyone interested in the poetry of the second half of the twentieth century... it's a delight."—Alison Croggon Oyster Boy Review

“The Scottish concrete poet, visual artist, short story writer, aphorist, editor, and ‘avant-gardener’ Ian Hamilton Finlay is one of the great polymaths of our time. His writings alone would put him in the pantheon of twentieth century poets. Finlay’s son Alec, himself a poet, has now given us a selection of his father’s writings, beautifully edited and annotated, lavishly illustrated, and with a superb new introduction to the work. I consider this book, long overdue, to be a milestone in publishing. —Marjorie Perloff, author of The Futurist Moment and Unoriginal Genius: Poetry by other means in the 21st Century

"Ian Hamilton Finlay was an entirely original, and continuously challenging, voice in the poetry of the English-speaking world over the second half of the twentieth century. This promises to be the first book in which his early verse, his concrete poetry and his distinctive compilations of aphorisms and ‘sentences’ are all substantially represented." —Stephen Bann, author of Ways Around Modernism

“When I was young and trying to figure out how to think about landscapes and gardens and their cultural histories, no one opened the garden gates wider than Ian Hamilton Finlay in his poetic and sometimes provocative print projects, garden sculptures, concrete poems (sometimes in actual concrete or stone), aphorisms, and other works. Finlay was a loner, a visionary looking backward to think on revolution and paradise, Arcadia and insurrection, and this book put together by his artist son Alec makes that work available for the first time in a long while, and as gorgeously as possible. Alec's long biographical essay is itself a hugely valuable resource for anyone interested in the elder Finlay's works, and then there are the poems, and the pictures...” —Rebecca Solnit, author of Infinite City: A San Francisco Atlas

“Only a handful of poets working in the visual tradition in the twentieth century have a profile that shows up in the broader scenes of fine art and modern culture. Among them, Ian Hamilton Finlay is probably the most frequently cited. But the work and thinking of this complex, enigmatic, and sometimes controversial figure is not necessarily well understood. This new volume documenting the many facets of Finlay's work as a poet, sculptor, and thinker across many media and a lifetime of creative activity will make it possible to study and appreciate his work anew. This collection makes a welcome addition to studies in book arts, visual poetry, and conceptual art through the presentation of an artist whose contributions have registered across these fields.” —Johanna Drucker, Breslauer Professor of Bibliographical Studies at the University of California, Los Angeles

“While Ian Hamilton Finlay’s career is one of complexity, as a creator he was a champion of the simple. Engaging regional melodies, quotidian objects, and native terrain, he took poetry back to its Greek root, ‘to make.’ This half-century journey—from folk poem to concrete poem to poem-in-the-world—is at all points filled with a vital restlessness.” —Lisa Jarnot, author of Night Scenes

“One must never forget that poets are makers, most vividly so in Scotland, where William Dunbar’s ‘Lament for the Makaris’ must still echo with uncanny poignance. Poetry is ‘a made thing’, as Robert Duncan put it. No poet will ever manage a word, much less a line, without all the resources of that art in timeless history sounding there, as each word finds its place in turn. There is no way to learn simply the intimacy of voice that Finlay has always, bringing one in to his physical person. It is a constant of his art in all its forms.” —Robert Creeley, from the foreword to the 1996 edition of Ian Hamilton Finlay’s The Dancers Inherit the Party and Glasgow Beasts, an a Burd

EARLY WRITINGS
Postcard from Glenlednoch
The Money
Walking through Seaweed

Glasgow Beasts, An a Burd
Voyage
Fishing from the Back of Rousay
Another Huge Poem for Hughie
Blossom Quarry, Rousay
How to Be Happy
Lucy’s Wee Brother
My Little Beat Mill in the West
Poem on My Poem on Her and the Horse
Such Is the World
Lucky
Midhope (All Gone)
Dalchonzie
The Pond of Oo (in Orkney)
No Thank You, I Can’t Come

One-Word Poems:
a bird of dawning
sea
a heart-shape
a spray, from a breton sea-hedge
a sea-saw
a water-lily pool
osiris
drip-dry
curfew
the boat’s blueprint
elegy for ‘whimbrel’ and petrel
the cloud’s anchor
an orchard of russets
a scotch daisy
hill
wave
a grey shore between day and night
a pinnate evergreen
a patch for a rip-tide
a keel with a tuck in it
a machine for fishing from
purse seine
a sepia wild flower
eec sea
channel light-vessel automatic

One-Line Poems and Monostich (I):
The ABC of Tea
Epicurus at Chatou
A Pittenweem Fancy
The Sea’s / Waves
Elegiac Inscription
Stem
Sea
Your Name

From A Mast of Hankies:
Preparations
The Hanky Sails
The Harbour
The Old Nobby
The Stopped Sailboat
The End

So You Want to Be a Panzer Leader?
Fly Navy
After Gael Turnbull

One-Line Poems and Monostich (II):
Dove, Dead in its Snows
Poverty Pitted with Larks
Fax, Idling in its Sails
Monostich
An Eighteenth Century Line on a Lukewarm Hotwaterbottle
A Classic Monostich
A Line Struck from James Thomson’s Seasons
A Valentine
The Colours of the Vowels
A Question for Lovers

Selected Dispatches of Louis Antoine Saint-Just:
Clay the Life
King
The Sound of Running Water Heard through Chinks in a Stone Dyke
His Bed a Meadow
Mystic
Sublime
The Revolution
1794
From ‘Clerihews for Liberals’
A Reflection on the French Revolution
Streiflichter
From Proverbs for Jacobins
From Detached Sentences on Friendship
The Inscriptions
From Flakes
From Spring Verses
Images from the Arcadian Dream Garden
Epitaph
The Brewster Buffaloes
From Glider Days
In the Manner of the Early Winters
From New Proverbs
From A Book of Wildflowers
Homage to Lorine Niedecker
Creels and Creels
Lines of Foam
Found Free-style Haiku
Oak / Bark / Boat
Line Light Lade
Adaptation
Variations
Expectation
Romanticizing
10 Sentences
Cinema-Going
Event
A Stone
Lemons without Bitterness
Boat
Boat Lore
A Last Word
Pledge (for Pia)
Frisson
Schlachtschiff
The End . . .

Notes
A Note on the Critical Heritage
Selected Bibliography
Credits