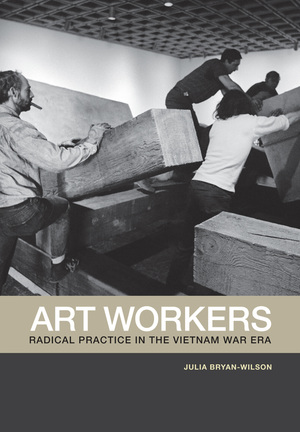 During the late 1960s and early 1970s, in response to the political turbulence generated by the Vietnam War, an important group of American artists and critics sought to expand the definition of creative labor by identifying themselves as “art workers.” In the first book to examine this movement, Julia Bryan-Wilson shows how a polemical redefinition of artistic labor played a central role in minimalism, process art, feminist criticism, and conceptualism. In her close examination of four seminal figures of the period—American artists Carl Andre, Robert Morris, and Hans Haacke, and art critic Lucy Lippard—Bryan-Wilson frames an engrossing new argument around the double entendre that “art works.” She traces the divergent ways in which these four artists and writers rallied around the “art worker” identity, including participating in the Art Workers' Coalition—a short-lived organization founded in 1969 to protest the war and agitate for artists' rights—and the New York Art Strike. By connecting social art history and theories of labor, this book illuminates the artworks and protest actions that were central to this pivotal era in both American art and politics.

A Best Book of 2009, Artforum Magazine

Julia Bryan-Wilson is Associate Professor of Art History at the University of California, Irvine.

“An intensive account. . . . Ms. Bryan-Wilson’s book is of immediate, practical value to young artists today who want to re-establish art as an alternative place in the culture, though her clean prose will also make the book inviting to more casual readers.”—New York Times Book Review

“A vivid picture of artistic activism, essential both for the art history of the 1960s and for today’s discourse on art and politics.”—Carrie Lambert-Beatty, Harvard University Artforum

“We owe Bryan-Wilson a debt of gratitude for the research that went into the preparation of this text. In Bryan-Wilson one finds an author who is eager to cut through the mystification served up by the artists and their commentators. . . . Art Workers--An ambitious and detailed historical account of some of the paradoxes that serve to define the petite-bourgoise class identity of artists of the late-1960s--generally tackles the political self-identification of artists with aplomb.”—Art Journal (CAA)

“Among the many accomplishments of this superior study is the refinement the author brings to readers’ understanding of the Duchampian found object and the aesthetics of minimalism and conceptualism amid the overheated idealism of antiwar politics. . . . Highly recommended.”—Choice

“It stands to reason that art works are made by art workers, but in this searching account of artistic labor in the 1960s and 1970s, Julia Bryan-Wilson shows us that reason is supplanted by ambivalence and ambiguity as artists grappled with the massive upheavals wrought by feminism, the student movement, and the Vietnam War. The art made in the wake of these social transformations toggles between reform and revolution, and the definition of 'artist' has not been the same since.”—Helen Molesworth, Houghton Curator of Contemporary Art, Harvard Art Museum

“In this engaging history of the Art Workers' Coalition, Julia Bryan-Wilson considers the dilemmas and contradictions as well as the artistic innovation and activism that resulted when 'artist' and 'worker' were brought into conjunction at a volatile moment in the late 1960s. Carl Andre in blue coveralls, Robert Morris driving a forklift, Hans Haacke polling gallery-goers, Lucy Lippard delivering her art reviews right after delivering her baby—to such iconic images and moments Bryan-Wilson brings her thorough scholarship and keen analysis.”—Douglas Crimp, author of On the Museum's Ruins

“In Julia Bryan-Wilson's deeply researched and insightful Art Workers, episodes that had seemed familiar and safely filed away take on a new narrative drive, a more profound salience for contemporary art practice, and a greater weight in our historical understanding of a crucial period.”—Thomas Crow, author of The Rise of the Sixties: American and European Art in the Era of Dissent

“This brilliant, vital, and timely study opens up a view of 1960s and 1970s American art that we didn't know we needed until we had it. One by one, the remarkably perceptive chapters of Bryan-Wilson's book converge to form a volume in the best tradition of the intellectual and interdisciplinary freedoms that remain the chief legacy of the period. The political lives of makers and objects have a new champion in Bryan-Wilson.”—Darby English, author of How to See A Work of Art in Total Darkness