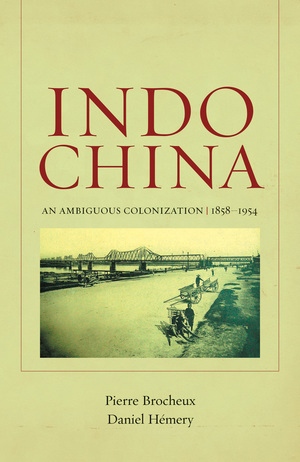 Combining new approaches with a groundbreaking historical synthesis, this accessible work is the most thorough and up-to-date general history of French Indochina available in English. Unique in its wide-ranging attention to economic, social, intellectual, and cultural dimensions, it is the first book to treat Indochina's entire history from its inception in Cochinchina in 1858 to its crumbling at Dien Bien Ph in 1954 and on to decolonization. Basing their account on original research as well as on the most recent scholarship, Pierre Brocheux and Daniel Hémery tell this story from a perspective that is neither Eurocentric nor nationalistic but that carefully considers the positions of both the colonizers and the colonized. With this approach, they are able to move beyond descriptive history into a rich exploration of the ambiguities and complexities of the French colonial period in Indochina. Rich in themes and ideas, their account also sheds new light on the national histories of the emerging nation-states of Vietnam, Laos, and Cambodia, making this book essential reading for students, scholars, and general readers interested in the region, in the Vietnam War, or in French imperialism, among other topics.

“There is an extraordinary amount of useful information and well-crafted argument in this book; it deserves to be consulted widely.”—Journal Of Modern History

“It is the first and still the only comprehensive, synthetic text covering the French period in Indochina - including its social, cultural, political and economic dimensions - and as such it will be indispensable in anglophone college classrooms.”—Melissa Louise Anderson South East Asia Research

“A comprehensive and critical account. . . . A rewarding text.”—Xiaorong Han Canadian Journal Of History

“The great merit of the authors’ undertaking lies not only in their coverage of such a vast array of highly complicated issues... but in their ability to represent.”—Journal Of World History

“A boon for anyone interested in the region.”—Danny Yee Danny Yee’s Book Reviews

“Sure to remain for some time to come the most comprehensive and authoritative study of French Indochina.”—Robert Aldrich Oxford Journal

"An important, well-conceived, and original piece of historical synthesis."—Peter Zinoman, author of The Colonial Bastille: A History of Imprisonment in Vietnam

“Indochina is the first and best general history of French colonial Indochina from its inception in 1858 to its crumbling in 1954. It is the only work to avoid nationalist, colonialist, and anticolonialist historiographies in order to fully explore the ambiguity of the French colonial period. A major contribution to the national histories of France, Vietnam, Laos, and Cambodia.”—Christopher Goscha, Université du Québec à Montréal