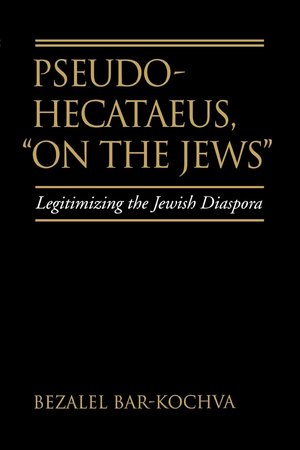 Pseudo Hecataeus, On the Jews Legitimizing the Jewish Diaspora

Debate over the authenticity of "On the Jews" has persisted for nearly 1,900 years. Bezalel Bar-Kochva attempts to overcome this stalemate in his finely detailed and convincingly argued study that proves the forgery of the book and suggests not only a source for the text, but also a social, political, and cultural setting that explains its conception.

Bar-Kochva argues that the author of this treatise belonged to the moderate conservative Jews of Alexandria, whose practices were contrary to the contemporary trends of Hellenistic Judaism. They rejected the application of Greek philosophy and allegorical interpretations of the Holy scriptures and advocated the use of Pentateuch Hebrew as the language for educating and for religious services. They showed a keen interest in Judea and identified themselves with the Jews of the Holy Land. "On the Jews," then, was the manifesto of this group and was written at the peak period of the Hasmonean kingdom. Its main purpose was to legitimize Jewish residence in Egypt, despite being explicitly prohibited in the Pentateuch, and to justify the continued residence of Jews there in a time of prosperity and expansion of the Jewish independent state.

Bezalel Bar-Kochva is Professor of Ancient Jewish History, Tel Aviv University, and author of Judas Maccabaeus (1989) and The Seleucid Army (1976).