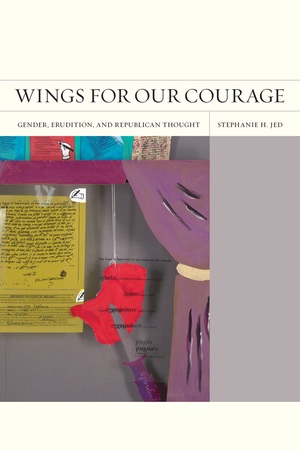 Wings for Our Courage Gender, Erudition, and Republican Thought

On January 6, 1537, Lorenzino de’ Medici murdered Alessandro de’ Medici, the duke of Florence. This episode is significant in literature and drama, in Florentine history, and in the history of republican thought, because Lorenzino, a classical scholar, fashioned himself after Brutus as a republican tyrant-slayer. Wings for Our Courage offers an epistemological critique of this republican politics, its invisible oppressions, and its power by reorganizing the meaning of Lorenzino’s assassination around issues of gender, the body, and political subjectivity. Stephanie H. Jed brings into brilliant conversation figures including the Venetian nun and political theorist Archangela Tarabotti, the French feminist writer Hortense Allart, and others in a study that closely examines the material bases—manuscripts, letters, books, archives, and bodies—of writing as generators of social relations that organize and conserve knowledge in particular political arrangements. In her highly original study Jed reorganizes republicanism in history, providing a new theoretical framework for understanding the work of the scholar and the social structures of archives, libraries, and erudition in which she is inscribed.

Stephanie H. Jed is Professor of Literature at the University of California, San Diego, and the author of Chaste Thinking: The Rape of Lucretia and the Birth of Humanism.

“A thought provoking discussion about research practices in archives and libraries and the ways in which the organization and transmission of knowledge relate to social and political organizations and arrangements.”—Nicholas Scott Baker Renaissance Qtly

“[An] ingenious book. . . . The whole book is deeply researched. It is extraordinarily well planned and executed. . . . [Jed] is to be warmly congratulated.”—Bibliotheque D'humanisme Et Renaissance