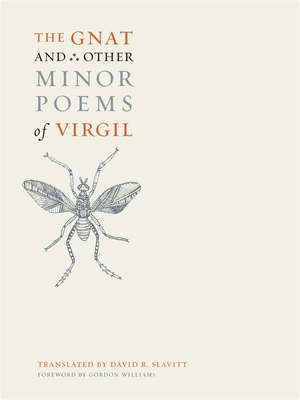 My dear Octavius ... But do I forget myself?

No, on the contrary, I remember, as you do, too,

those old days when we fooled around, just starting out,

each on his own path, but good friends then and now.

Back then, as baby spiders sometimes do, I made

any kind of prey. But how else can they begin?

Let me return to that playful making of miniatures

that can be, I think, endearing, and are able to sustain

more than one might suppose. A plot! The speeches of heroes,

allusions to gods and all the Muses' elaborate stagecraft.

The bass notes will come later, but for the moment let us

turn our attention to this, the narrative of a gnat.

Will critics carp? I defy them! Their views are of even less

weight than the gnat would claim. All they want is uplift

and sound ideas. The poet has other, more important

business he must transact-as you so well understand.

because its inspiration comes from Phoebus Apollo,

the golden child of Zeus and Latona and source of my song.

Let him inspire me with riffs on his harp that sound

to pass the town of Arna. Or better yet, imagine

between the two rocky cliffs that appear to be great horns.

There the Naiads dance, thronging about the god,

while Pales, the shepherds' goddess, blesses her devotees

with increase in their flocks and keeps the woodlands green.

Tend those who tend the beasts, that I may roam the glades

taking whatever I can of their cool green inspiration.

And you, my dear Octavius, you also deign to bless

my efforts and to inspire, by your manifest merit,

the confidence I need for any such undertaking.

My lines will not sound the clangor of battle and bloody fighting,

and I shall not speak of war. The gigantomachy at Phlegra

is not what I have in mind. The Lapiths' brawl with the Centaurs

demands a recklessness that both you and I might question.

The Persian assault upon Athens with Xerxes' digging a channel

through Athos' foothills, and then later their ruinous flight

would make for the kind of splendid piece one dreams of writing,

supports the prosodist's craft with its bittersweet understanding.

Let's put that off a little, when the thirst for fame may prompt

ambitious undertakings for you of course, but for me,

too, in my own way. These are the tender shoots

of the flowers of early spring when Phoebus comes to wake

the long- slumbering earth with the warmth of his attention.

Let us wander barefoot as the young know how to do

on the almost velvety greensward. The holy youth I knew

was not yet burned by fame that waits upon you now

but I suspect you knew that it would one day arrive

from which your glistening presence will pour its blessings down

to inspire men and let them know of the joys of the good.

in the eastern sky and scatter its gift of golden rays,

and Aurora yet again has set the Darkness to flight

when a herdsman comes on the scene, driving his goats before him

and climbing the mountainside on his way to the happy pastures

where the grass still wet with the dew covers the gentle slopes.

The animals wander here and there, as if they have

a program they follow, but, no, it's just a series of promptings

of this attractive thicket, that delightful knoll,

and they crop the grass and nibble, composing as they do so

a picture of contentment for which we, in the city,

sometimes feel a yearning. Look at the rocky hollows,

the vines, the trailing arbutus, the delicate weeping willow

where the animals amble or sometimes, for no apparent reason,

caper and run, or then, as arbitrarily, rest.

her neck to take the delicate new leaves of the alder

that overhangs the stream, with no idea whatever

of the landscape she's in that sets her utter concentration

into a context of ease, tranquility, and peace?

Which of us has never thought of becoming a herdsman

and accepting the invitation of that pastoral scene? We dream

of power and wealth, of achievement, and are taught to feel disdain

for the poor man's bare-bones existence. But who in the city can claim

the happiness goatherds must feel at moments and settings like this?

The luxuries around us weigh us down with cares

as they whet our appetites for ever greater indulgence

so that our hearts are never at rest but always questing

to satisfy those whims that swirl around in our heads.

How fine to have our fleeces vividly double-dyed

in bright Assyrian colors, but can this satisfy?

can sate the greedy soul, relentless in its craving.

of an Alcon or a Boethus cannot quench such thirst

that burns as if from a fever. But there in that pleasant meadow

with a heart that is free from guile, the herdsman lies down happy,

where spring puts pastel accents of blossoms wherever he looks.

and with it makes simple music, sweeter than our soirées

can ever provide in a salon abuzz with envy and hate.

This is the kind of playing Tmolus judged and enjoyed,

and sometimes the goats pause, look up from their grass and stare,

pleased at the sound they take to be that of some nearby bird.

and all the gifts of Pales nourishing flesh and spirit,

where in his full heart can greed find a place to invade?

These delightful poems—by turns whimsical, beautiful, and vulgar—seem to have primarily survived because they were attributed to Virgil. But in David R. Slavitt’s imaginative and appealing translations, they stand firmly on their own merits. Slavitt brings to this little-known body of verse a fresh voice, vividly capturing the tone and style of the originals while conveying a lively sense of fun.

David R. Slavitt has been lauded for his translations of Virgil, Ovid, Seneca, Aeschylus, and Aristophanes, as well as Propertius in Love and De Rerum Natura, both from UC Press.

“An atypical Virgil writing humorous, obscene, parodic, and very slight poems, uncharacteristic to such an extent that scholarship has pretty definitely consigned them to the realm of forgery and misattribution.”—Los Angeles Review Of Books

"David Slavitt is the most fluent and imaginative translator of Latin verse working today, and this collection of Virgilian poems testifies to his skill, sensitivity, and wit. Slavitt brings to this odd and little-known body of verse a real voice. Whether or not the poems are Virgil's is, in the end, less important than the fact that, by the end of this book, these poems have become truly Slavitt's."

—Seth Lerer, Dean of Arts and Humanities at the University of California at San Diego

"Slavitt has an established, unique, and appealing voice. He does an excellent job catching the tone and style of the originals, and these are readable and entertaining interpretations of the Latin."

—Daniel Berman, author of Myth and Culture in Aeschylus' Seven Against Thebes

“Light-hearted poems, some obscene, some studies in vitriol, a miniature epic about a gnat, a recipe for a salad that gave the United States its motto, e pluribus unum—these are poems that have come down to us under the name of great Virgil. David Slavitt’s free versions bring them to life, capturing their wit and flair. They are a joy to read, not least for revealing a cheerier side of ancient Rome.”


—David Konstan, author of The Emotions of the Ancient Greeks: Studies in Aristotle and Classical Literature
Read More >