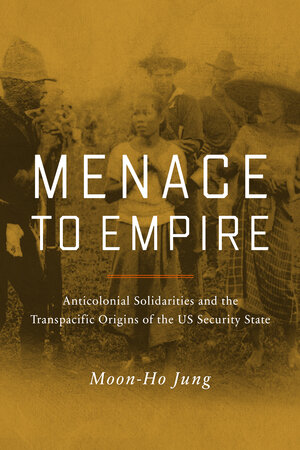 One of Smithsonian Magazine's Favorite Books of 2022

This history reveals how radical threats to the United States empire became seditious threats to national security and exposes the antiradical and colonial origins of anti-Asian racism.

Menace to Empire transforms familiar themes in American history. This profoundly ambitious history of race and empire traces both the colonial violence and the anticolonial rage that the United States spread across the Pacific between the Philippine-American War and World War II. Moon-Ho Jung argues that the US national security state as we know it was born out of attempts to repress and silence anticolonial subjects, from the Philippines and Hawaiʻi to California and beyond.

Jung examines how various revolutionary movements spanning the Pacific confronted the US empire. In response, the US state closely monitored and brutally suppressed those movements, exaggerating fears of pan-Asian solidarities and sowing anti-Asian racism. Radicalized by their opposition to the US empire and racialized as threats to US security, peoples in and from Asia pursued a revolutionary politics that engendered and haunted the national security state—the heart and soul of the US empire ever since.

By Moon-Ho Jung, author of Menace to Empire: Anticolonial Solidarities and the Transpacific Origins of the US Security State In the wake of very visible hate crimes against Asian Americans this past …

Moon-Ho Jung is Professor of History at the University of Washington and the author of Coolies and Cane: Race, Labor, and Sugar in the Age of Emancipation.

"Jung understands that learning about empire involves more than reading about oppressive actions and policies. He invites readers to find examples where people from different backgrounds, interests and worldviews came together to actively oppose empire."—Smithsonian Magazine

"Menace to Empire is a comprehensive study of violence against Asians, the struggle to find their place in the United States and undergoing the adverse effects of the tight security US officials implemented as they grew increasingly suspicious of the influence and intentions of Asians in America."—European Journal of American Culture

"This sprawling narrative tracks a massive cast of Asian revolutionaries, unionists, anti-imperialists, and leftists as their campaigns drove them to seek inspiration and allies in the United States, London, Japan, Brussels, Hong Kong, and Moscow, with hosts of military and intelligence agents working to suppress them following in hot pursuit. . . . In capturing Asian activists’ extensive travels, complex networks, and shifting coalitions, Menace to Empire recovers the significance of their pursuit of alternative futures."—Journal of Interdisciplinary History

"Moon-Ho Jung's brilliant and riveting history shows how the US security state was created to preserve its empire from revolutionary insurgencies in the Pacific. Turns out the 'Yellow Peril' was Black and Red and anticolonial and everywhere—Luzon to Lahore, Shanghai to San Francisco, Hawai'i to Harlem, Manila to Moscow to Mexico. No model minorities here; just gravediggers of imperialism and terrified agents of a settler state waging a war that continues to this day. Menace to Empire is one of those earth-shattering books that will force us all to rethink the entire twentieth century."—Robin D. G. Kelley, author of Freedom Dreams: The Black Radical Imagination

"This long-awaited original book excavates and traces visions, networks, and movements of pan-Asian anticolonial revolutionaries who vigorously struggled to defeat imperialism and white supremacy in Asia and the Pacific, from the Philippines and India to Hawai'i and California and beyond, against which the modern US national security state developed as a response."—Lisa Lowe, author of The Intimacies of Four Continents

"Magical. This is a book of breathtaking intellectual ambition with an admirable clarity of analysis and narration, despite the many challenging twists and turns and layers of the history under investigation."—Matthew Frye Jacobson, author of The Historian's Eye: Photography, History, and the American Present

"Menace to Empire shows how the twentieth-century clash between colonial violence and anticolonial rage in Asia played a central role in both US foreign policy abroad and racial formation at home. In this splendid book, Moon-Ho Jung's exhaustive research and persuasive writing make a singular contribution to scholarship and civic life by demonstrating that it was responses to revolutionary pan-Asian movements challenging racial capitalism in the twentieth century that led to the creation of the repressive US national security apparatuses that have undermined democracy ever since."—George Lipsitz, author of The Possessive Investment in Whiteness
Read More >