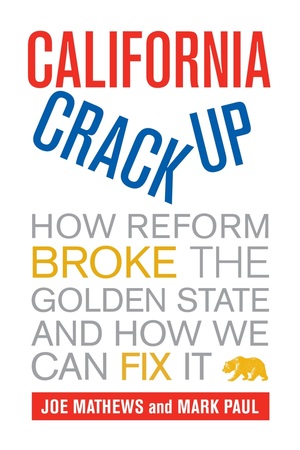 Is California beyond repair? A sizable number of Golden State citizens have concluded that it is. Incessant budget crises plus a government paralyzed by partisan gridlock have led to demands for reform, even a constitutional convention. But what, exactly, is wrong and how can we fix it? In California Crackup, Joe Mathews and Mark Paul provide clear and informed answers. Their fast-paced and often humorous narrative deftly exposes the constitutional origins of our current political and economic problems and furnishes a uniquely California fix: innovative solutions that allow Californians to debate their choices, settle on the best ones, hold elected officials accountable for results, and choose anew if something doesn’t work.

Joe Mathews is Irvine senior fellow at the New America Foundation as well as a fellow at the Center for Social Cohesion, Arizona State University. He is the author of The People’s Machine: Arnold Schwarzenegger and the Rise of Blockbuster Democracy, a columnist for The Daily Beast, a freelance journalist, and associate editor of Zócalo Public Square Mark Paul is senior scholar and deputy director of the California program at the New America Foundation. He was formerly deputy treasurer of California and deputy editorial page editor of the Sacramento Bee. Mathews and Paul are authors of the article "How to Fix a Broken State" in the March 2011 issue of Boom: A Journal of California.

“Neither Mr. Brown or Ms. Whitman, as they attempt to blaze a trail to the governor's mansion, have suggested anything as sweeping as the proposals in ‘California Crackup.’ Their own fixes, at best, will be technocratic—increasing government efficiency, for instance, instead of simply piling on more public funds. Still, both candidates may want to read the book's diagnosis of the potentially terminal problems that one of them is certain to inherit.”—Troy Senik Wall Street Journal

“A timely book with a lot of important things to say.”—Newsweek

“Lucid analysis is spiked with wit and appealing turns of phrase that lift it above mere wonkery.”—San Francisco Magazine

“Two of the shrewdest California-ologists now practicing . . . Mathews and Paul provide the best explanation we've yet had of the scope and sources of the state's governmental dysfunctionality. More important, they also provide the most far-reaching and thoughtful proposals for reinventing California's government—so far—reaching and thoughtful, in fact, that their recommendations should be considered in every capital where small-d democrats find themselves banging their heads against the wall in sheer frustration. . . . Theirs are certainly the best ideas for rebuilding California's government that the state has seen since—well, probably ever.”—Harold Meyerson American Prospect

“A terrific book. Cataloging the multiple, inter-locking political elements that caused the collapse of governance in California, the two veteran political writers draw these pieces together into a lucid framework that offers not only a clear diagnosis, but also a serious prescription for what ails the not-so-Golden State. The clarity of their writing and the cogency of their argument put to shame the content of the current campaign for governor. . . . Nice work, guys. Calbuzz sez: check it out.”—Calbuzz

“Objective and at times humorous (if that’s possible) analysis of how California grew dysfunctional and what will make it functional again. This new release is getting solid reviews from critics and readers alike.”—Jim Wood Marin Magazine

“The authors do a great job of explaining what has been done to try to control the [budget] beast and how it became a depressing example of the law of unintended consequences. . . . So are we doomed to a government unable to accomplish anything, much less heal itself? Sometimes it does look that way. But the authors of "California Crack Up" do have some ideas about how to fix things, and some are pretty good.”—Royal Calkins Monterey County-Herald

“If you’ve grown weary of California's annual budget stalemates and furloughs, if you're frustrated by the Legislature, if you feel California is broken, then ‘California Crack Up: How Reform Broke the Golden State and how we can fix it’ should be required reading. . . the book is a concise and lucid analysis of how the state arrived at its current mess, as well as offering strategies to address what's ailing it.”—Byron Williams Oakland Tribune

“A smart, good read that closely analyzes and traces the state’s political dysfunction, from the short attention spans of its constitutional framers to the intractable knots of political gridlock that bind it 131 years later.”—Jerry Roberts Santa Barbara Independent

“If you are interested in improving government—you should read the book . . . it reflects the spirit of innovation that was once part of the California story. This is what the campaign for governor should have been about.”—Bill Boyarsky Truthdig

“This is a great book; everyone who wants to fix California needs to read it.”—Garrett Gruener California Journal Of Politics And Policy

“Provides compelling analysis and a number of promising solutions. Californians should put these solutions to immediate use, rather than leave them on the shelves to gather dust while our state collapses.”—Robert Cruickshank California Northern Mag

“[Mathews and Paul are] shrewd and witty observers of state politics, and both are extraordinarily adept at explaining California's problems clearly.”—Peter Richardson California Studies Association

“What California needs, and what might just save the UC system, which is being eroded before our eyes, is a structural overhaul of our state’s system of governance. Mark Paul and Joe Matthews present a set of concrete solutions in their book, ‘California Crackup.’”—Jeff Schauer Daily Californian

“An entertaining and pertinent history that offers suggestions that are applicable well beyond California — and utterly essential here. The writers know how to use a sort of wry humor to defuse the gloom that hangs over us all. If the path to hell is paved with good intentions, the path back out is paved with good books.”—Rick Kleffel Kusp Radio / The Agony Column

“A welcome attempt to stand above the political fray . . . much of what Mathews and Paul do propose at the level of policy is indeed sensible and well justified. Their arguments on behalf of the need to energize the legislature are particularly important.”—Susan McWilliams Southern California Quarterly

"California Crackup is brilliant. It cuts through the familiar tangle of diagnoses and quick-fix solutions to provide a comprehensive and persuasive analysis of California's dysfunctional governmental system. Paul and Mathews have coolly laid out a complicated story, made it readable, sometimes even comedic. It is the best discussion of the issue I've seen in over three decades."—Peter Schrag, author of California: America's High-Stakes Experiment

"I know of no other work that combines so succinctly and enjoyably a historical summary of California's existing problems with such a sweeping and provocative program of reform."—Ethan Rarick, University of California, Berkeley

"Mark Paul and Joe Mathews have produced an indispensable guide to California's crisis of governance—and they have done so with humor, scholarship, fairness and storytelling verve. Every Californian should read this book."—Steve Coll, Pulitzer Prize-winning author of Ghost Wars

"Mark Paul... has a talent for presenting California Big Think stuff in an easily accessible and always readable way...[offering] clear and creative insights on the subject of California's collapse."—CalBuzz

"Joe Mathews has done an artful, fascinating, and convincing job of connecting the California of today's Schwarzenegger era to the long history that made his rise possible.—James Fallows,The Atlantic Monthly on Mathews' book, The People's Machine

Part I
Building and Breaking California
1. Crisis without Exit
2. History and the Constitution
3. Empowering and Shackling Sacramento
4. From Teachers to Janitors:
Direct Democracy Demotes the Legislature

Part II
The California Fix
5. Budgeting without Shackles
6. The Architecture of Political Frustration
7. Remaking Elections and the Legislature
8. Government from the Bottom Up
9. A More Direct Democracy