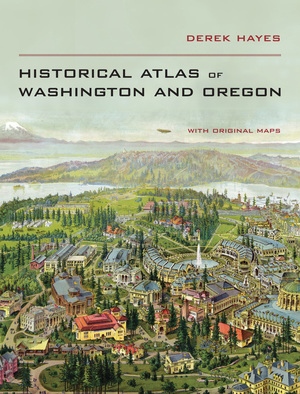 Historical Atlas of Washington and Oregon

This gorgeous atlas, illustrated throughout with more than 500 colorful images and maps, provides a visually rich and textually engaging history of the states of Oregon and Washington. Derek Hayes brings his enthusiasm and expertise to a full range of topics, beginning with the first inhabitants and tracing the westward expansion, conflict between settlers and Native Americans, and the establishment of the Oregon Trail. We see in vivid images, old maps, and lively text the coming of the railroads and the rapid establishment of the coastal ports, northwest cities and roads, the fur and lumber industries, and the large farms. We also witness the twentieth-century development of the war industries, the establishment of the aviation industry, and the celebratory 1962 Seattle World’s Fair. At once a valuable reference and an exhilarating adventure through history, the Historical Atlas of Washington and Oregon presents readers with a fascinating chronicle of how these proud states came into their own and how they each look toward the future.

“A treasure trove of historical maps and information that should intrigue any aficionado of Northwest history. . . . You’ll want to spend hours curled up on the couch with this engaging uber-coffee table book.”—Brenden Koch Walla Walla Union-Bulletin

“At once a valuable reference and an exhilarating adventure through history, the Historical Atlas of Washington and Oregon presents readers with a fascinating chronicle of how these proud states came into their own and how they each look toward the future. . . . A must have for those interested in the history of these two states!”—Ian Paulsen The Guardian

“To leaf through a Hayes atlas is a bit like a solitary ramble through a museum (the Victoria and Albert in London comes to mind) with no guard to check you as you rummage through the cupboards. A treasure here, a surprise there, a little shock at what people in the past were thinking.”—Mary Ann Gwinn Seattle Times

“A stunning collection of more than 500 often fascinating images and maps that serve as another form in understanding the history and evolution of the two states.”—Lee Juillerat Klamath Falls Herald & News

“If one wants an overview of the cartographic record of Washington and Oregon, this atlas is now the obvious place to find it. One can spend delightful hours exploring and learning from its maps. . . . If you live in Washington or Oregon and are curious about your regional surroundings, this is a book to own.”—Cole Harris Oregon Historical Qtly

“Hayes’s latest atlas maintains the quality of his previous publications and is highly recommended for public and academic libraries, map enthusiasts, and anyone with a special interest in the history and heritage of the Northwest.”—Edward K. Werner Library Journal

“Derek Hayes illustrates history of this region through a collection of over 500 colour images and historical maps that are both informative and beautiful. . . . Recommended for all types of libraries.”—Sue F. Phelps Reference Librarian, Washington State University Vancouver Reference Reviews

“A fascinating visual history of places and how they evolved. . . . And for historians in the family, this would make a great Christmas gift.”—Karen Prasse Skagit Valley Herald

Historical Atlas of the American West:

“Sumptuously spilling over with period maps, posters, and images as well as impeccable historical data. Steel-wheels-heads of all gauges will find it enlightening and entertaining.”—American History

“The Atlas is a record of ideas, of real places and enterprises, and of dreams, some of which never got beyond the drawing board…. [I]llustrations of what earlier Californians made of the promise of this place.”—Sacramento Bee

Historical Atlas of the United States:

"Derek Hayes works his way from the discovery and settlement of North America to the ever-evolving maps recording America's westward push and onward to the early maps of the automobile age."—William Grimes, New York Times