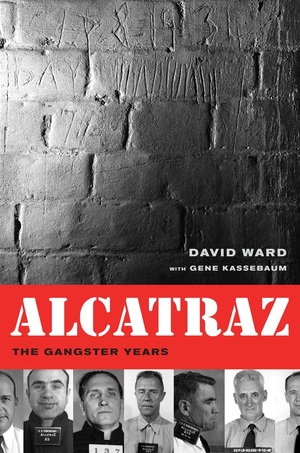 Al Capone, George "Machine Gun" Kelly, Alvin Karpis, "Dock" Barker—these were just a few of the legendary "public enemies" for whom America's first supermax prison was created. In Alcatraz: The Gangster Years, David Ward brings their stories to life, along with vivid accounts of the lives of other infamous criminals who passed through the penitentiary from 1934 to 1948. Ward, who enjoyed unprecedented access to FBI, Federal Bureau of Prisons, and Federal Parole records, conducted interviews with one hundred former Alcatraz convicts, guards, and administrators to produce this definitive history of "The Rock." Alcatraz is the only book with authoritative answers to questions that have swirled about the prison: How did prisoners cope psychologically with the harsh regime? What provoked the protests and strikes? How did security flaws lead to the sensational escape attempts? And what happened when these "habitual, incorrigible" convicts were finally released? By shining a light on the most famous prison in the world, Ward also raises timely questions about today's supermax prisons.

David Ward is Professor Emeritus of Sociology at the University of Minnesota. He is the coauthor (with Gene Kassebaum) of Prison Treatment and Parole Survival and coeditor (with Kenneth Schoen) of Confinement in Maximum Custody: New Last-Resort Prisons in the United States and Europe. Ward served as consultant to the U.S. House of Representatives' Committee on the Judiciary for an investigation at Alcatraz's successor, the Federal Penitentiary at Marion, Illinois, and is a member of a consultant group investigating prison gang policies in the California Department of Corrections. Gene Kassebaum is Professor Emeritus of Sociology at the University of Hawaii and has also coauthored with Ward, Women's Prison: Sex and Social Structure.

“‘Alcatraz: The Gangster Years’ is replete with enough incident and fascinating characters to make it enjoyable as well as informative. Anyone who has read it is unlikely to look upon the Rock quite the same way ever again.”—Martin Rubin San Francisco Chronicle

“David Ward's magisterial study of the prison, Alcatraz: The Gangster Years, will appeal to anyone interested in crime and punishment. . . . Ward and his longtime collaborator, Gene Kassebaum, have produced a combination oral history, documentary history, and longitudinal study (with a few statistics thrown in) unprecedented in scope and duration. . . . Alcatraz, as David Ward has re-created it, is irresistible to read about.”—Ben Pesta California Lawyer

“Alcatraz: The Gangster Years deserves a place in the library of anyone or institution.”—Webb Johnson California Historian

“David Ward has written the definitive history of Alcatraz. . . . Alcatraz is a darn good book about a very interesting subject written in a clear style. Which means that on the Read-O-Meter, which ranges from 1 star (tedious) to 5 stars (winning), Alcatraz nabs 5 stars.”—Randall Radic Basil & Spice

"Ward has collected the most impressive documentation anywhere on the workings of a prison. A unique and wonderful work of sociology and history."—Howard Becker, author of Outsiders: Studies in the Sociology of Deviance and Art Worlds


"This groundbreaking history of the country's most notorious prison is the first to give an in-depth analysis of the interaction between the guards and the prisoners. Ward captures the Alcatraz experience with the accuracy of someone who has practically been there and lays to rest many of the myths that have grown up around the prison. No longer will the story-tellers be able to describe the inmates as 'the worst of the worst' without qualification. Their individual stories come alive as the author records the varied life experiences that brought them to Alcatraz and describes their coping mechanisms. A unique and fascinating study."—Morton Sobell, Alcatraz Inmate #AZ699 1950-1963, author of On Doing Time
Read More >

Introduction: Reconstructing the Life of a Prison

Part I. Alcatraz from 1934 to 1948
1. The Federal Government's War on Public Enemies
2. A New Form of Imprisonment
3. Selecting the “Worst of the Worst”
4. The Program
5. Organized Resistance: A Regime Tested
6. Finding a Hole in the Rock: The First Escape Attempts
7. Alcatraz on Trial
8. The War Years
9. The Battle of Alcatraz

Part II. Life on the Rock for Resisters and Public Enemies
10. Resistance and Adaptation
11. Outlaws among Outlaws
12. Celebrity Prisoners

Part III. Alcatraz as an Experiment in Penal Policy
13. Return to the Free World
14. Lessons from Alcatraz for Supermax Prisons

Charles Berta was shipped to Alcatraz after his conviction for robbing a mail train in Berkeley and then escaping from Leavenworth with the warden as a hostage.

Harmon Waley, sentenced to 45 years for kidnapping, spent seven of his 22 years on the Rock in isolation or disciplinary segregation cells.

Floyd Harrell serving 20 years for kidnapping,because he happened to be in the prison hospital, became a direct observer of the May, 1946 "Battle of Alcatraz" going on in the main cell house.

Robert Baker, the first guard hired at Alcatraz, was taken hostage and wounded during the battle of Alcatraz.

Officer "Y" helped to rescue the guard hostages and locate the bodies of the convicts who died during the May, 1946 breakout attempt.