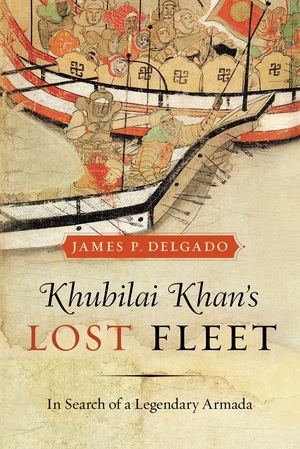 Khubilai Khan’s Lost Fleet In Search of a Legendary Armada

In 1279, near what is now Hong Kong, Mongol ruler Khubilai Khan fulfilled the dream of his grandfather, Genghis Khan, by conquering China. The Grand Khan now ruled the largest empire the world has ever seen—one that stretched from the China Sea to the plains of Hungary. He also inherited the world's largest navy—more than seven hundred ships. Yet within fifteen years, Khubilai Khan's massive fleet was gone. What actually happened to the Mongol navy, considered for seven centuries to be little more than legend, has finally been revealed. Renowned archaeologist and historian James P. Delgado has gone diving with a Japanese team currently studying the remains of the Khan's lost fleet. Drawing from diverse sources—sunken ships, hand-painted scrolls, drowned bodies, and historical and literary records— in this gripping account that moves deftly between the present and the past, Delgado pieces together the fascinating tale of Khubilai Khan's maritime forays and unravels one of history's greatest mysteries: What sank the great Mongol fleet?

James P. Delgado is the President of the Institute of Nautical Archaeology. His many previous books include the British Museum Encyclopedia of Underwater and Maritime Archaeology, and, most recently, Gold Rush Port: The Maritime Archaeology of San Francisco's Waterfront (UC Press). Delgado has hosted the National Geographic television series "The Sea Hunters."

“Engaging and highly readable . . .Delgado writes with an attractively direct style. . . . This trim volume, covering only a small part of a vast subject, is . . . a valuable addition to the shelves.”—The Guardian

“Splendor galore . . . This consistently interesting, well-organized book addresses more than its title suggests. [It] will appeal to anyone interested in modern underwater archaeology or Asian, maritime, and military history-who, after all, isn't amazed that Khubilai's second fleet was the largest ever assembled until Operation Overlord some 650 years later?”—Foreword Magazine

“[Delgado] writes so well, on such a human level. He makes history come alive because, as he points out, history and archeology are about telling the stories of real lives, which by definition are fascinating. . . . [He is] a particularly gifted writer. This delightful and informative book not only recounts the exploits of Khubilai Khan, but provides the reader a colorful narrative of pan-Asian history.”—Huffington Post

“This is a well-written and valuable book exploring an area of scholarship that is still in its infancy in Asia.”—China Review International

“James Delgado is one of the world's preeminent marine archaeolgists; he's also a terrific writer, and Khubilai Khan's Lost Fleet is a fascinating adventure tale packed with insights into a maritime empire about which most Westerners know almost nothing.”—Nathaniel Philbrick, author of In the Heart of the Sea


“The attempts by Khubilai Khan to invade Japan with his all-conquering Mongol armies were instrumental in forging Japan's national consciousness, yet the precise details of the operations have for centuries remained a mystery. Through brilliant and painstaking research James Delgado has brought Khubilai Khan's lost fleet to the surface, showing for the first time the true nature of the doomed adventure.”—Stephen Turnbull, author of The Samurai Sourcebook

“This is two stories in one: how the armada sent by Khubilai Khan to invade Japan in 1281—the greatest fleet in history before D-Day—was churned to bits by a typhoon and how some of those bits are being retrieved in one of the greatest feats of modern marine archaeology. James Delgado has been at the heart of this project. He ranges widely, showing how the past and present illuminate each other. (To the Japanese, the typhoon was the original kamikaze, the 'divine wind' after which their World War II suicide bombers were named.) Objectivity is matched with personal involvement, scholarship with narrative skill. This is history at its best: rigorous, original, and vivid.”—John Man, author of Kublai Khan and The Terra Cotta Army