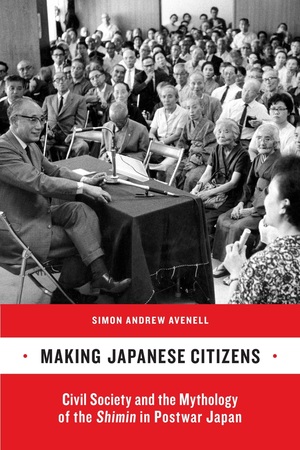 Making Japanese Citizens is an expansive history of the activists, intellectuals, and movements that played a crucial role in shaping civil society and civic thought throughout the broad sweep of Japan's postwar period. Weaving his analysis around the concept of shimin (citizen), Simon Avenell traces the development of a new vision of citizenship based on political participation, self-reliance, popular nationalism, and commitment to daily life. He traces civic activism through six phases: the cultural associations of the 1940s and 1950s, the massive U.S.-Japan Security Treaty protests of 1960, the anti-Vietnam War movement, the antipollution and antidevelopment protests of the 1960s and 1970s, movements for local government reform and the rise of new civic groups from the mid-1970s. This rich portrayal of activists and their ideas illuminates questions of democracy, citizenship, and political participation both in contemporary Japan and in other industrialized nations more generally.

Simon Andrew Avenell is Assistant Professor in the Department of Japanese Studies at the National University of Singapore.

“This book is a much welcome addition, one that forces us to recognize the centrality of historical ideas. It is a must-read for all who want to understand contemporary Japanese society and politics.”—Japanese Journal Of Political Science

“This book is an ambitious intellectual history of social movements in postwar Japan . . . . [A] commendable project.”—Franziska Seraphim American Historical Review

“[Avenell’s] breadth of knowledge about the pantheon of Japanese postwar intellectuals is breathtaking, and through many revealing anecdotes his text reads like a history of the people, by the people, for the people.”—Roman Rosenbaum Japanese Studies

“Avenell contributes an important piece to the historic puzzle.”—Monumenta Nipponica

“This book obviously has much to recommend it. There are scarcely any other works, even those written in Japanese, that cover the evolution of the postwar concepts of shimin and civil society in Japan in such great detail. . . . A considerable accomplishment.”—Shigeki Uno/University of Tokyo Social Science Japan Jrnl

"This provocative book provides a historically grounded, densely documented, and analytically shrewd account of the 'mythology of the citizen' in postwar Japan. Avenell chronicles a history of cooptation, revealing that the citizen myth was susceptible to ethnic-nationalist sentiment, and later to the appeal of 'spontaneous' social service that could promote convergence with state and corporate interest. Nevertheless, as Avenell clearly shows, the mythology of the citizen remains attractive and retains its potential as an instrument of critique-for the essential act of negation that is the final protector of any democratic collectivity from supervening authority."—Andrew Barshay, author of The Social Sciences in Modern Japan: The Marxian and Modernist Traditions