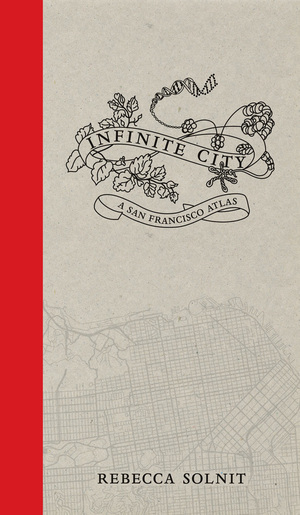 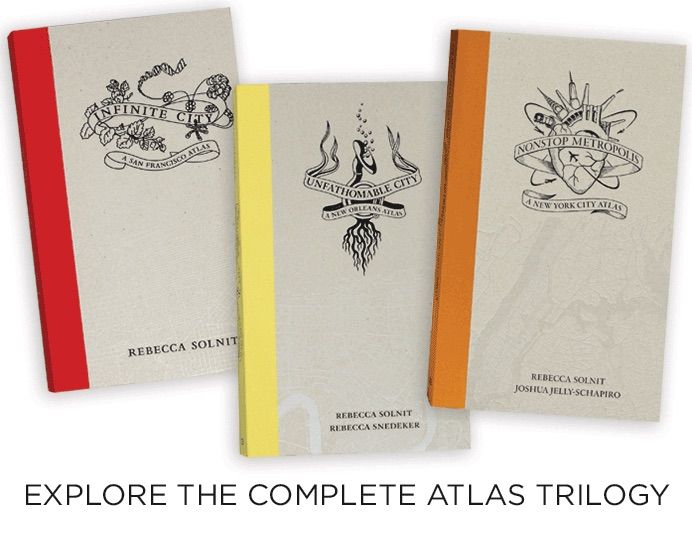 What makes a place? Infinite City, Rebecca Solnit’s brilliant reinvention of the traditional atlas, searches out the answer by examining the many layers of meaning in one place, the San Francisco Bay Area. Aided by artists, writers, cartographers, and twenty-two gorgeous color maps, each of which illuminates the city and its surroundings as experienced by different inhabitants, Solnit takes us on a tour that will forever change the way we think about place. She explores the area thematically—connecting, for example, Eadweard Muybridge’s foundation of motion-picture technology with Alfred Hitchcock’s filming of Vertigo. Across an urban grid of just seven by seven miles, she finds seemingly unlimited landmarks and treasures—butterfly habitats, queer sites, murders, World War II shipyards, blues clubs, Zen Buddhist centers. She roams the political terrain, both progressive and conservative, and details the cultural geographies of the Mission District, the culture wars of the Fillmore, the South of Market world being devoured by redevelopment, and much, much more. Breathtakingly original, this atlas of the imagination invites us to search out the layers of San Francisco that carry meaning for us—or to discover our own infinite city, be it Cleveland, Toulouse, or Shanghai.

Gift Guide 2020: All Boxed Up and Ready to Gift

These books will make the perfect gifts for the bibliophiles in your life—from the stunning classic boxed set of Homer to Rebecca Solnit’s gorgeously designed atlases.

By Lia Tjandra, Art Director with Dore Brown, Principal Editor Each title in the atlas series had more moving pieces than any other book we’ve published. Multiple authors and contributors produced different parts …

A Look Back at Infinite City: A San Francisco Atlas

We are getting increasingly excited about the forthcoming publication of Nonstop Metropolis: A New York City Atlas, the final volume in our trilogy of atlases by Rebecca Solnit, Joshua Jelly-Schapiro, and a …

Rebecca Solnit is the best-selling author of many books, including River of Shadows, for which she won the National Book Critics Circle Award, A Paradise Built in Hell, Savage Dreams (UC Press), and Storming the Gates of Paradise (UC Press).

“A handsome collection of thought-provoking and delightful maps that show us many takes on a city that’s hidden before our eyes.”—San Francisco Chronicle

“Places exist in our minds, perhaps more vividly than they might in the moments we physically pass through them. Our understanding of a place— and how we might emotionally map it—is informed by what we bring to it; our past, present, future; expectations, hopes and disappointments color the legend. It's this symbiosis—the relationship between memory, imagination, anticipation and reality—that Rebecca Solnit's captivating, deeply evocative collection of re-imagined maps and essays, Infinite City: A San Francisco Atlas, expertly charts.”—Los Angeles Times Book Review

“A many-layered treat for any San Franciscan who thinks she knows her city.”—KQED

“A whole new kind of atlas, one with inventive maps and well-researched text that makes unexpected connections, and thereby rewrites the history and reshapes the character of this famous city and the surrounding area. . . . Solnit has expanded the definition of what a book can be and how a story can be told in a mesmerizing, revolutionary new way.”—Santa Cruz Sentinel

“A gorgeously produced collection of maps and essays.”—Los Angeles Review of Books

“Solnit takes us on a tour that will change the way we think about place. Breathtakingly original, with its seemingly unlimited landmarks and treasures, this atlas of the imagination invites us to search out layers of the city that carry meaning for us.”—San Francisco Bay Guardian

“If you are a lover of maps, of San Francisco, or both, the experience of Infinite City is worth having.”—San Francisco Examiner

"Not your average atlas. . . . A fascinating visual representation of San Francisco’s many diverse geographical and cultural layers."—Fodor's Travel

“With academic wit and an explorer's eye, Solnit teases out the interplay of forces that have guided the city's cycles of growth and destruction, development and decay.”—High Country News

"Writer and activist Rebecca Solnit charts more than thoroughfares and bicycle routes. She tackles the social cartography of San Francisco in a series of maps that make visible the city’s hidden mysteries and rich history. Her field guide beautifully juxtaposes famous landmarks and invisible cultural phenomena, essentially drawing social connections between the city’s ecology and its neighborhood stories.”—Design Mind

“A fresh and intriguing spin on mapmaking.”—Utne Reader

“A richly textured graphic book that no electronic format can master yet, Infinite City features Rebecca Solnit as cultural and historical tour guide through the city she calls home.”—Shelf Awareness

“Rebecca Solnit synthesizes cultural and critical geographic inquiry into a readable, accessible, and visually stimulating collection of maps and narratives about one of the nation’s most diverse metropolitan areas. She admits that the work is a love poem and celebration of a city she adores, but she is also quick to peel away the layers and expose the dark contradictions and flaws in her city. This makes Infinite City both a romantic valentine and a candid, critical introspection.”—Geographical Review

“An amazing collaboration among artists, cartographers, geographers, activists, historians, gadflies, ecologists, photographers, and a law scholar, all collected together by Solnit to pursue her belief that ‘every place deserves an atlas.’ So it does, and Solnit's collective has come up with one for San Francisco that is simply stunning—though at least as much for the essays that accompany the maps as for the maps themselves. Infinite City is place description at its fullest and most important.”—H-Net Reviews

“Infinite City offers a new way of thinking about any location. Readers will be inspired to create their own atlases of the cafes, music venues, street markets, historical and racial landmarks, iconic trees, statues, bird groups in their own towns or cities. The book provides a template for a way to rethink the world around you.”—Sydney Morning Herald

"At last a field book with the sense of San Francisco—the non sense, the real sense, the mysteries of the microclimates, gays and butterflies, gangs, boulevards and mysterious alleys. All here!"—Michael McClure

"Downright near infinite, at any rate, the good fortune of a city blessed with such antic chroniclers as Rebecca Solnit, First Citizen of the Imagination, and her entire splendid crew. There's one map missing, though, from this marvelous little volume: the MRI of any reader lucky enough to wander into its myriad graven precincts—synapses firing, dendrites scintillating away, a whole mad happy carnival of fresh neuronal associations."—Lawrence Weschler, author of Everything that Rises: A Book of Convergences

"Solnit's writing is born of intense reverie and deep reading, passionate inquiry and political defiance; she is a lyric questor for the texture of everyday life, and she attends to places and to their variety and particularity with an exhilarating form of attention that illuminates and transforms her subjects. Infinite City is a marvellous atlas, a new approach to history-making and storytelling; it's also a highly original praise song to many San Franciscos, a multi-layered and polyphonic testament, alert to the play of detail and to the grand design, to the shadows of memory that fall, the restless shifts in the urban scene and the vital energy of overlooked subjectivities."—Marina Warner
Read More >

Introduction: On the Inexhaustibility of a City

Map 1. The Names before the Names: The Indigenous Bay Area, 1769
“A Map the Size of the Land,” by Lisa Conrad

Map 2. Green Women: The Open Spaces and Some Who Saved Them
“Great Women and Green Spaces,” by Richard Walker

Map 4. Right Wing of the Dove: The Bay Area as Conservative/Military Brain Trust
“The Sinews of War Are Boundless Money,” by Rebecca Solnit

Map 6. Truth to Power: Race and Justice in the City’s Heart
“The City’s Tangled Heart,” by Rebecca Solnit

Map 7. Poison/Palate: The Bay Area in Your Body
“What Doesn’t Kill You Makes You Gourmet,” by Rebecca Solnit

Map 9. Fillmore: Promenading the Boulevard of Gone
“Little Pieces of Many Wars,” by Rebecca Solnit

Map 11. Graveyard Shift: The Lost Industrial City of 1960 and the Remnant 6 AM Bars
The Smell of Ten Thousand Gallons of Mayonnaise and a Hundred Tons of Coffee, by Chris Carlsson

Map 12. The Lost World: South of Market, 1960, before Redevelopment
Piled Up, Scraped Away,” by Rebecca Solnit

Map 13. The Mission: North of Home, South of Safe
“The Geography of the Unseen,” by Adriana Camarena

Map 14. Tribes of San Francisco: Their Comings and Goings
“Who Washed Up on These Shores and Who the Tides Took Away,” by Rebecca Solnit

Map 16. Death and Beauty: A Year of Murders, a Noble Species of Tree
“Red Sinking, Green Soaring,” by Summer Brenner

Map 17. Four Hundred Years and Five Hundred Evictions in the City
“Dwellers and Drifters in the Shaky City,” by Heather Smith

Map 18. The World in a Cup: Coffee Economies and Ecologies
“How to Get to Ethiopia from Ocean Beach,” by Rebecca Solnit

Map 21. Treasure Map: The Forty-Nine Jewels of San Francisco
“From the Giant Camera Obscura to the Bayview Opera House,” by Rebecca Solnit

Map 22. Once and Future Waters:Nineteenth-Century Bodies of Water, Twenty-Second-Century Shorelines 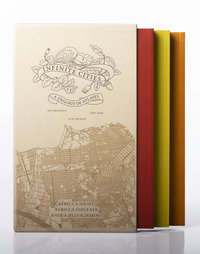 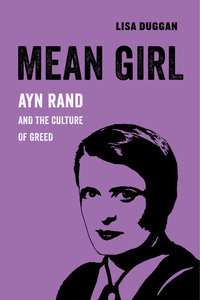 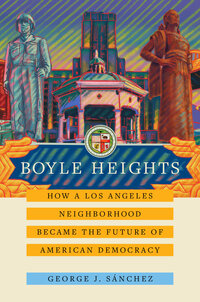