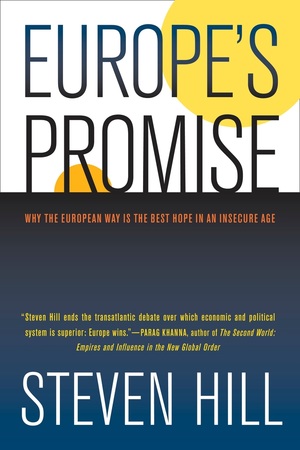 A quiet revolution has been occurring in post-World War II Europe. A world power has emerged across the Atlantic that is recrafting the rules for how a modern society should provide economic security, environmental sustainability, and global stability. In Europe's Promise, Steven Hill explains Europe's bold new vision. For a decade Hill traveled widely to understand this uniquely European way of life. He shatters myths and shows how Europe's leadership manifests in five major areas: economic strength, with Europe now the world's wealthiest trading bloc, nearly as large as the U.S. and China combined; the best health care and other workfare supports for families and individuals; widespread use of renewable energy technologies and conservation; the world's most advanced democracies; and regional networks of trade, foreign aid, and investment that link one-third of the world to the European Union. Europe's Promise masterfully conveys how Europe has taken the lead in this make-or-break century challenged by a worldwide economic crisis and global warming.

Steven Hill is Director of the Political Reform Program for the New America Foundation and author of 10 Steps to Repair American Democracy and other books on politics. His articles have appeared in the New York Times, Washington Post, Los Angeles Times, Wall Street Journal, Salon.com, TheNation, International Herald Tribune, The Guardian, Prospect, and many other publications and websites.

“Steven Hill is a lucid and engaging writer. He makes you sit up and think. He is surely right in saying that Europe’s prosperous, peaceful and democratic social market economy looks attractive when contrasted with the unbalanced, excessively deregulated US model or with China's politically repressive capitalism."—Tony Barber Financial Times

“An engrossing book. . . . Hill has a gift for capturing cogent themes in a single image. . . . Steven Hill examines the evolving trajectory since World War II of Europe’s ‘fulcrum institutions’ on which their societies pivot, and discovers rich contrast to the ruinous feuding of Republicans and Democrats here.”—Anne Grant Providence Journal

“Breezily written and well-documented . . . Hill ably demolishes a series of common myths concerning differences between Europe and the United States . . . To anyone wondering whether by 2099 the current era will be viewed as a second ‘American Century,’ Hill’s warnings are worth considering. If the competitive advantages he ably enumerates continue to evolve in Europe’s favor, the claim to the century may well cross the Atlantic.”—Cecilio Morales America: The National Catholic Weekly

“Europe’s promise is in many ways a provocative and exuberant book.”—Teija Tiilikainen Insight Turkey

"In this spirit of de Toquevillian wisdom, Hill offers the reader a comprehensive analysis of Europe aimed at engaging the American public in a dialogue about the transformative achievements of the old continent. A very-well written discussion, substantiated by a wealth of reference material and dotted with personal anecdotes.”—A. E. Wohlers Choice

"The two great strengths of Europe's Promise are its breadth and its accessibility. The discussion is far ranging. . . . Hill dispels myths and caricatures. He manages to survey in one book an extremely rich cross section of the policies and political practices that make 'The European Way' distinctive. . . . Hill's book is also very well written, in an engaging journalistic style."—Dan Keleman Eusa Review (European Union Studies Assoc)

"Europe’s Promise will be an eye opening read for many Americans. As Hill shows, much of the American media coverage of Europe is slanted to reinforce caricatures of the ‘Old Continent’ – that European economies are inefficient, overtaxed and uncompetitive, and that Europe is deeply divided politically. Instead, he demonstrates that the economically advanced democracies of Europe have developed a model of social capitalism and a wide range of public policies that may serve as models for American reformers."—Firedoglake Book Salon

"Steven Hill is the author of a book – now listen to the title – "Europe's Promise: Why the European Way is the Best Hope in an Insecure Age", and he thinks the US should be more like those Europeans. Really? Are you serious? Do you really want to make us more like them?"—Fox Business Channel

“Hill’s thesis is that Western Europe treats its people better in many ways than the United States does its people, and not just in social insurance and services. Read, wonder and galvanize!”—Ralph Nader In The Public Interest

“There are books on international politics which should not be rectangular, with a cover made of cardboard and many, many pages of paper, but they should look like cartridges for an assault rifle: sharp pointed projectiles with steel jackets and a heavy charge of powder in the case. "Europe's Promise" by Steven Hill, program director at the Washington-based New America Foundation, is one such book. Explosive power, wherever you look.”—Internationale Politik

"The two great strengths of Europe's Promise are its breadth and its accessibility. The discussion is far ranging . . . Hill dispels myths and caricatures. He manages to survey in one book an extremely rich cross section of the policies and political practices that make "The European Way" distinctive -- from health care policies, to environmental policies, to family and other social policies, to foreign policy. Hill's book is also very well written, in an engaging journalistic style. The book makes a great contribution to European studies -- communicating in one compelling volume so much of what is distinctive and appealing about "The European Way." He argues that Europe has become a global leader, with a model of sustainable development and social capitalism that offers the most hopeful path forward for the 21st Century."—Prof. Dan Kelemen, Rutgers University, Director, Center For European Studies

"What can the United States learn from Europe? If you believe what's said in Washington, the answer is 'not much'. If you read Steven Hill's intelligent, broad-ranging, and deeply researched book, you'll find the correct answer is 'a great deal'—and now is the time to learn it."—Prof. Jacob S. Hacker, Yale University, Author Of “The Great Risk Shift”

“Europe’s Promise marshals an impressive army of facts and comparative statistics to show that the United States is behind Europe in nearly every socioeconomic category that can be measured and that neither America’s trickle-down, Wall Street-driven capitalism nor China’s state capitalism hold the keys to the future.”—Reuters

“U.S. militarism has long been a core part of the American Way,” writes Steven Hill in a just-published book, Europe’s Promise, that compares the United States and Europe. Militarism does “triple duty as a formidable foreign policy tool, a powerful stimulus to the economy, and a usurper of tax dollars that could be spent on other budget priorities.”—Reuters International

"Steven Hill, a director at the Washington-based New America Foundation, has just published a book, Europe's Promise, which argues that “the European way is the best hope in an insecure age.” He dismissed talk of the EU being “marginalized” in a G2 world. On the contrary, he emphasized that the Obama White House was under pressure from the EU on climate change and financial regulation. “This, of course, is the exact opposite of the view that 'Europe is irrelevant'. Europe is actually hyper-relevant,” he said. “Obama knows that Europe is leading in these ways, and he would like to follow to some extent, but he is having a hard time delivering.”—Ian Traynor The Guardian

“A spirited new tour guide to the Europe beyond the tourist hotspots. . . . Europe, Hill helps us understand, has much more to offer than history and vistas. Europe has a model, an approach to modernity that offers, by every measure that matters, the finest quality of life in the world.”—Sam Pizzigati Too Much

“There are vital lessons in Europe’s Promise from which America could benefit. . . . Hill is able to explain how and why Europe works and therefore, may galvanize Americans to look in the mirror and make some changes.”—Joseph David Rollwagen & Justin McCauley Vienna Review Of Books

"Steven Hill is an extraordinarily gifted writer... Europe's Promise is a substantial piece of work, with enormous footnoting, about the future of Europe and its influence as a place of extreme livability. Hill's intriguing book suggests that Europe isn't the basket-case that some people want to believe it is, and the quality of life and innovation there is quite high."—White House Chronicle On Pbs

"Steven Hill ends the transatlantic debate over which economic and political system is superior: Europe wins. While America and China fight for oil and minerals, Europe already achieves more with less. Indeed, the path to the American Dream is the European Way."—Parag Khanna, author of The Second World: Empires and Influence in the New Global Order

"Like a reverse Alexis de Tocqueville, Steven Hill dauntlessly explores a society largely unknown to his compatriots back home. Sweeping away the ideological posturing, he shows us exactly how the modern European Way works and the promise it holds for an America which has slipped to become, in terms of social, economic and energy policy, the Old World."—Hendrik Hertzberg, senior editor, The New Yorker, author of Obamanos!: The Birth of a New Political Era

"Europe's Promise should startle, inform, and galvanize Americans in raising the ante in favor of a political economy where people matter first."—Ralph Nader

“As Steven Hill compellingly argues in his excellent Europe's Promise: Why the European Way Is the Best Hope in an Insecure Age, Europe has become a dynamic, transformational force in the world and stands as a clear model of success on so many fronts that we must push reset in our assessment of Europe's course. Americans today should learn a bit about how Europe has quietly and incrementally added to its size and global weight and maintained an innovative approach to broad public challenges like renewable energy, capital punishment, social welfare, and even corporate dynamism.”—Steve Clemons, director of the American Strategy Program at the New America Foundation, author of the political blog, The Washington Note

"Europe's Promise is a provocative and illuminating book that should lead Americans to think hard about our own assumptions and priorities. By closely examining Europe's economic and political practices, Hill reveals a new Europe that has become the world's leader during this century challenged by global economic crisis, climate crisis, and new geopolitical tensions. In these times of hope and fear, read this captivating book to discover new and creative models for building a better future.”—Katrina vanden Heuvel, editor and publisher of The Nation

“Hill's book is an elegant and counterintuitive manifesto for a new politics of interdependence that could take the world through the turmoil of the economic and global warming crises.”—Mark Leonard, Executive Director, European Council on Foreign Relations

"What can the United States learn from Europe? If you believe what's said in Washington, the answer is 'not much'. If you read Steven Hill's intelligent, broad-ranging, and deeply researched book, you'll find the correct answer is 'a great deal'—and now is the time to learn it."—Jacob S. Hacker, author of The Great Risk Shift: The New Economic Security and the Decline of the American Dream

Part One. Social Capitalist Europe
1. The Rise of the European Way
2. The Capitalist Engine That Huffed and Puffed . . .
3. Europe's Secret Advantage: Economic Democracy
4. Family Values, European Style
5. The Myth of the Overtaxed European and Other Modern Fables
6. The Economic Crash of 2008-9: Wall Street Capitalism vs. Social Capitalism

Part Four. Global Europe
11. The Reluctant Superpower: Transatlantic Rupture and the Post-9/11 World
12. The European Way of Foreign Policy, Put to the Test

Part Seven. Will Europe Survive?
16. The Challenges of Immigration and Integration
17. A European Civil Rights Movement Arises-Sort Of
18. The Dilemma of Population Decline: “Where are all the children?”