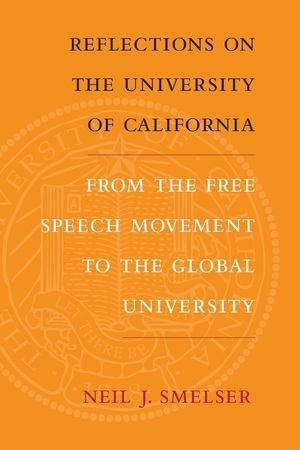 These invaluable essays offer an insider’s perspective on three decades at a major American university during a time of political turmoil. Neil J. Smelser, who spent thirty-six years as a professor of sociology at the University of California, Berkeley, sheds new light on a full range of the issues that dominated virtually all institutions of higher learning during the second half of the twentieth century. Smelser considers student activism—in particular the Free Speech Movement at Berkeley—political surprises, affirmative action, multiculturalism and the culture wars, and much more. As one of the leading sociologists of his generation, Smelser is uniquely qualified to convey and analyze the complexities of administrating a first-rate and very large university as it encounters a highly politicized environment.

Neil J. Smelser is University Professor Emeritus of Sociology at the University of California, Berkeley. He is the author of The Social Edges of Psychoanalysis and The Odyssey Experience among many other books.

"Neil Smelser has given us a kaleidoscope of insights into the major challenges facing campus and system leaders during defining moments in 20th century US higher education. This book is sure to engage both sociologists of higher education and people who simply wonder why campuses have become sites of such heated conflict and change."—Patricia J. Gumport, Vice Provost for Graduate Education, Stanford University

"Neil Smelser's essays signify more than the title suggests, concerned as they are with the major issues that confronted and sometimes confounded the University of California during the transformative years 1958-1994. Smelser was not a mere observer during these years but was a major player in the arena. UC today is nearly as much a reflection of this remarkable man's talents and service as his essays are a reflection on the university itself."—David P. Gardner, President Emeritus, University of California

"There is nothing like it in the literature on modern universities."—Harriet Zuckerman, Senior Vice President, Andrew W. Mellon Foundation